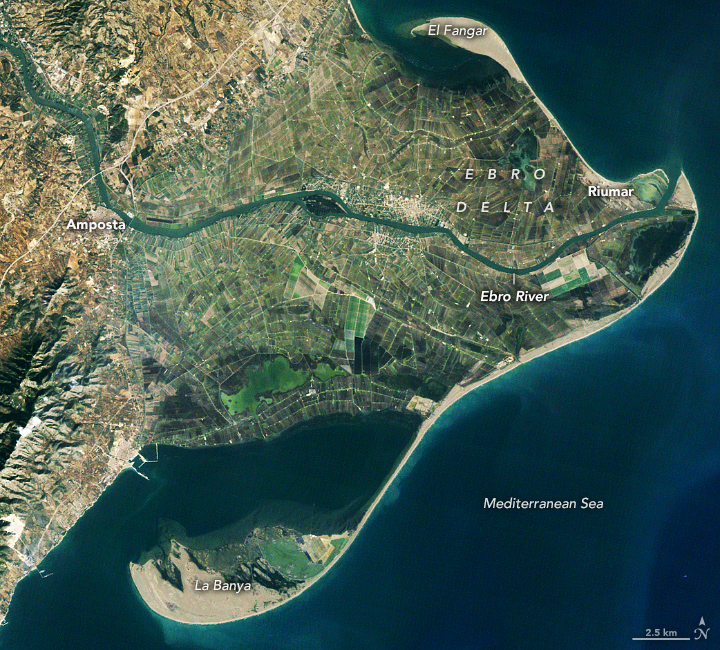 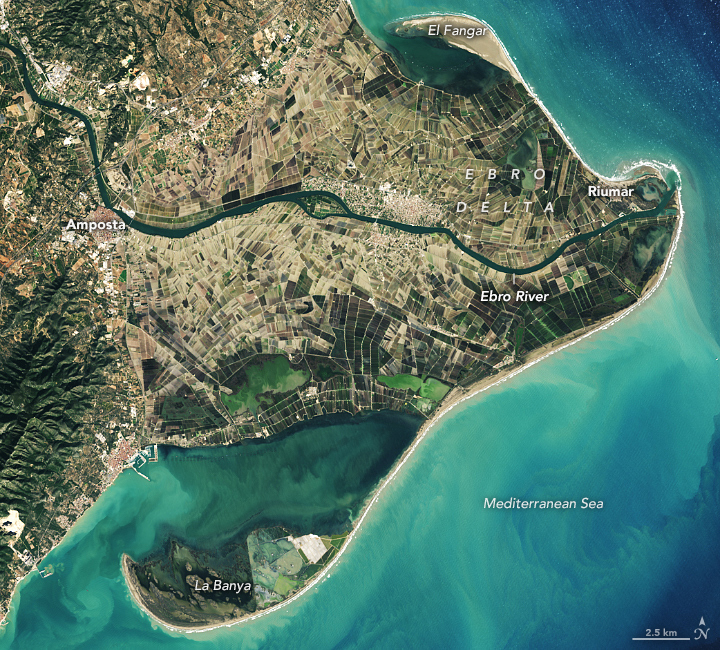 At roughly 325 square kilometers, the Ebro Delta on the northeastern coast of Spain is one of the largest wetlands along the Mediterranean Sea coast. It is an important habitat for wildlife, including flamingos and birds using the wetlands as a stopover on migratory journeys. The site in southern Catalonia has been designated a UNESCO Biosphere Reserve.

The 50-kilometer-long coastline features two sand spits: El Fangar on the north shore and La Banya on the south. These appendages are the remnants of the river's previous deltas, which were reworked when the river changed course over the past few thousand years.

The delta, which is home to 62,000 people, has also been greatly modified by human use. In the past 150 years, wetlands have been converted into fields of rice, which now cover up to 80 percent of the delta. To supply water for irrigation and to generate hydroelectric power, more than 187 dams have been built on Ebro River and its tributaries—development that trapped most of the sediment supply in Spain’s largest river in reservoirs and behind dams. Erosion and land subsidence followed downstream.

The two natural-color images above, acquired in 1984 and 2021, by Landsat 5 and Landsat 8 (respectively), show the erosion of the triangular island at the mouth of the Ebro River near Riumar has retreated by several hundred meters. Note that the differences in color between the images could be attributed to differences in the satellite sensors, changes in the landscape, and differences in the timing of tides.

Today, the shape and form of the delta is no longer controlled by the river, but by sea waves. And with sea-level rise and more frequent and intense storms, those waves are getting bigger, leading to further shoreline retreat. In January 2020, the narrow sandbar that connects the southern spit to the main delta was flooded by storm Gloria, along with 3,000 hectares of rice fields. Storms also exacerbate the shrinking and loss of dune fields on the beaches.

The Ebro Delta illustrates the hard choices to come for communities facing rising seas—try to hold back the ocean or manage the retreat.

The Spanish government recently announced a plan to buy coastal land to create a buffer zone. If the plan is adopted, the purchase would constitute the largest land buyout in Europe so far due to climate change. But it is opposed by many of the delta's inhabitants, some of whom instead favor beach nourishment, pumping, and seawalls to protect the coast. Some farmers are experimenting with strains of rice that can better withstand saltwater intrusion.