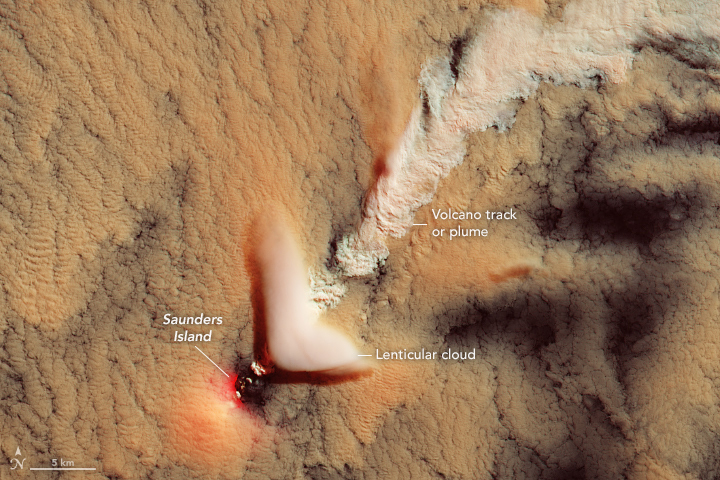 Mount Michael, an active stratovolcano in the South Sandwich Islands, is viewed more often by penguins than by people. It is located on Saunders Island, about 1,600 kilometers (1,000) miles from Antarctica and 2,400 kilometers (1,500 miles) from South America, and there are no permanent human residents nearby. For satellites looking down from space, the mountain is usually obscured by clouds. Still, the nearly 1,000-meter-tall volcano frequently finds a way to put on a show.

Some of the most common displays are wave clouds—the triangular, banded patterns of clouds that result from the disrupted flow of air around the volcano. But in this image, acquired on November 7, 2021, with the Operational Land Imager (OLI) on Landsat 8, the more compelling feature is the bright white stream visible downwind of the island.

The feature is possibly a type of cloud known as a volcano track. These “tracks” occur when passing clouds interact with the gases and particles from a volcano. The extra particles from the volcano produce more and smaller cloud droplets, which make the cloud appear brighter. “As the cloud moves over the volcano, the imprint of those smaller droplets stay in the cloud, resembling a stream or a track of different texture when seen from above,” said NASA atmospheric scientist Santiago Gassó, who spotted the feature and routinely hunts for volcano tracks in satellite images.

Volcano tracks can be difficult to discern in natural-color images. This image is false color, composed with a combination of shortwave infrared and blue light (OLI bands 7-6-2) to help distinguish the track from the rest of the cloud deck. Also notice the striking lenticular cloud. Unrelated to the volcanic activity, these clouds can develop at the crest of atmospheric waves that form when wind encounters a topographic barrier and is forced up.

Volcano tracks are a useful tool for scientists trying to spot cases of less intense volcanic activity. Such activity—the simple “puffs” of water vapor, particles, and gases—is common, but often goes unreported because the emissions usually stay below (or within) the clouds. By studying the clouds around these volcanic puffs, scientists have been gaining insight into how clouds form and evolve.

There is also the chance that the plume from Mount Michael on November 7 rose above the cloud deck, meaning the feature would be a typical volcanic plume, and not a volcano track. “The Landsat image has so much detail. I can see several shadows suggesting that what I called a volcano track is actually a plume positioned immediately above the cloud deck—low enough to cast a small shadow,” Gassó said. “But at the same time, it is unusual to have such an organized plume above the cloud deck without dissipating or thinning out more readily.”

Without lidar data to measure the feature’s height, it is not possible to know if the feature is volcano track or a plume. Either way, Gassó notes: “There is some beauty in it, right? In that same way, it triggers curiosity to find more.”