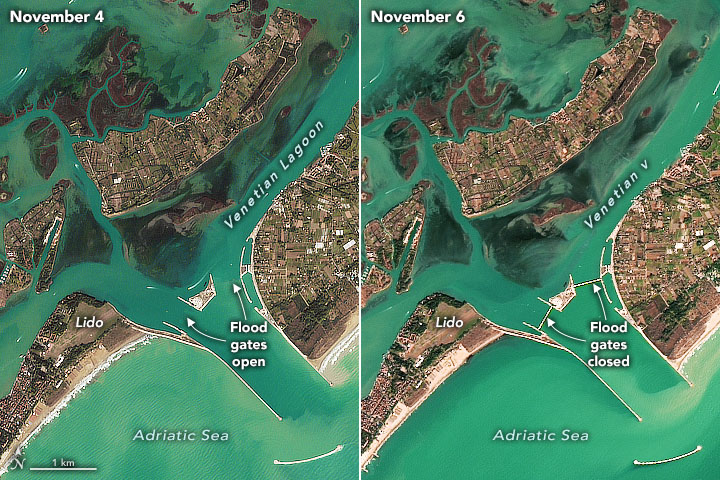 Venice Holds Back the Adriatic Sea

After a planning and construction process that spanned decades, a flood control system in Venice is now regularly protecting the low-lying city from high water. Satellites caught a rare glimpse of the system in action during a high-water storm event in November 2021.

The system—Modulo Sperimentale Elettromeccanico (MOSE)—includes 78 submerged barrier gates that are normally tucked into the seafloor. When weather forecasts show damaging floods (above 130 centimeters or 4.3 feet) are imminent, operators rotate the gates upward to form a temporary seawall that rises above the water surface. As shown by the Landsat and Sentinel-2 images on this page, the seawall prevents water from the Adriatic Sea from flowing through key inlets into or out of the shallow lagoon that surrounds Venice.

On the afternoon of November 3, 2021, the flood gates were raised as a storm brewed in the Adriatic Sea. At the time, forecasters warned that water levels might rise 140 centimeters above normal when high tide peaked and strong sirocco winds battered the Venetian coast. Water at that level is enough to flood 60 percent of the city, including the iconic St. Mark’s Square, the lowest part of the city.

While some of the barrier gates at the Lido inlet were kept closed for the duration of the high-water event, the gates at Malamocco and Chioggia inlets were retracted during low tide to let water out of the lagoon. The left image above, from the Multispectral Instrument (MSI) on Sentinel-2, shows sediment stirred into a zigzag pattern as the barrier gates at the Malamocco inlet retracted on November 4, 2021. Two days later, the Operational Land Imager (OLI) on Landsat 8 captured an image (above, right) showing the same inlet with the barrier gates fully activated and standing above the water surface. At the time of the Landsat overpass, strong winds (61 kilometers per hour/38 miles per hour) blew from the east, stirring up sediment on both sides of the barriers. 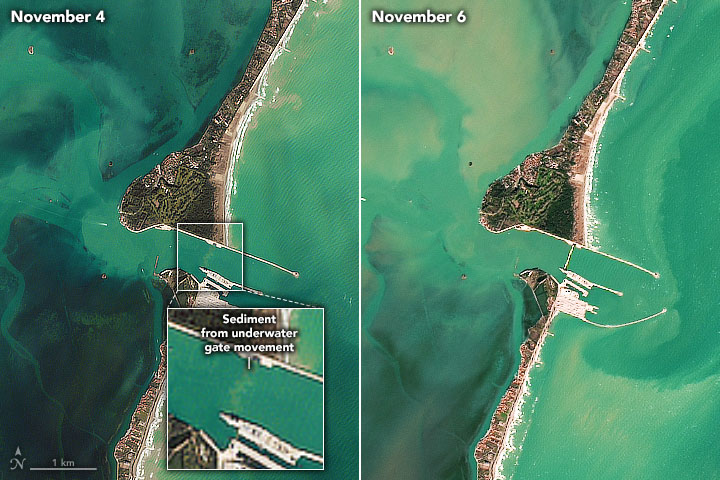 “It is quite rare to get Landsat or Sentinel imagery showing the barriers closed because they are only activated and above the surface during storms—when there is usually too much cloud cover to see them from above,” explained Luca Zaggia, a coastal oceanographer at Padua’s Institute of Geosciences and Earth Resources of the Italian National Research Council (CNR). “It is even more unusual for satellites to capture images of sediment stirred up by the movement of the barriers because this phase lasts less than 30 minutes.”

Landsat passes over the area once every 8 days; one of the Sentinel satellites make observations once every 2 to 3 days. Zaggia is part of a research team from Venice’s Institute of Marine Science that is investigating how the operation of MOSE could affect the movement and abundance of sediment around the lagoon.

Activating the flood gates proved successful in this case. While high tide water levels rose above 130 centimeters in the Adriatic Sea, they reached just 83 centimeters in Venice, enough to prevent major flooding. MOSE has been used several times in recent years as engineers test it and work toward making it fully operational by 2022. The floodgates were activated five times in 2021 and 20 times the previous winter. In 2019, before the system was available for use, more than 25 high-water events swamped Venice, including a November flood that proved to be the second worst on record.

Though MOSE has prevented several high-tide floods, sometimes high water has eluded system operators due to inaccurate weather and water height forecasts. For instance, much of Venice flooded in December 2020 after forecasts underestimated the maximum height of high tide by 5 centimeters—enough to prevent operators from elevating the barriers in time.

Rising global sea levels might affect the level of protection the system provides in coming decades. With relative sea levels rising by roughly 0.25 centimeters per year, the frequency of high-water events in Venice has already increased in recent decades, going from two per decade during the first half of the 20th Century to more than 40 per decade now. “In the best case emissions scenarios (RCP-2.6), the system should work well until the end of this century,” said Federica Braga, a remote sensing expert at Venice’s Institute of Marine Sciences, though she cautioned the system could begin to be overwhelmed sooner under worst case emissions and sea level rise scenarios.

Some researchers have calculated that the system will need to be closed for 3 weeks per year by the end of this century under a low-emissions scenario and for at least two months by 2080 under a high-emissions scenario. “A reduction in the number of water exchanges could trigger other problems in the long term even if the system mitigates the worst of the flooding,” said Zaggia. “For instance, it could change the sediment budget and negatively affect salt marshes or the water quality of the lagoon.”