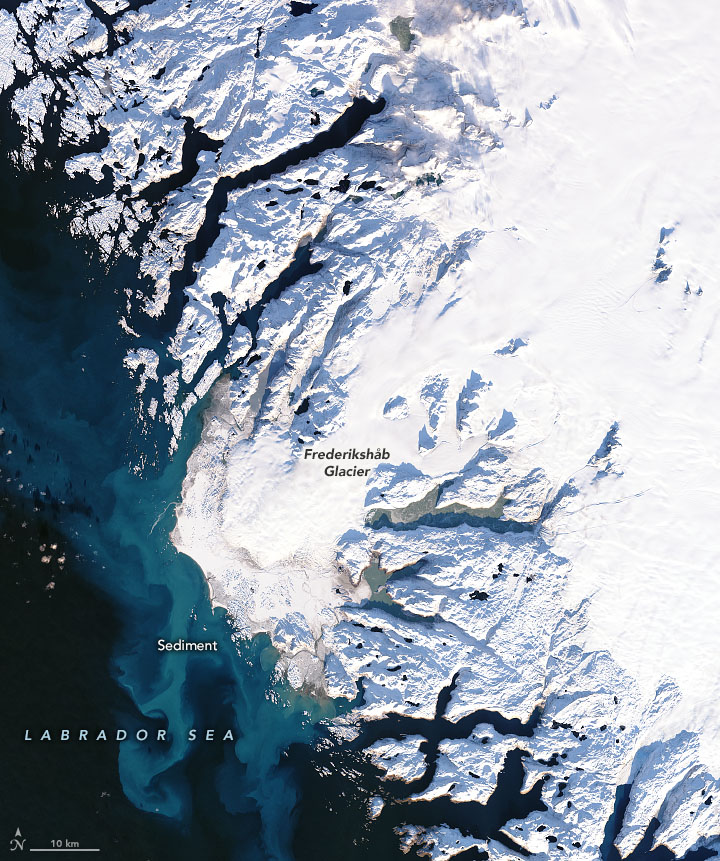 Greenland’s glaciers function like bulldozers, grinding away and pulverizing rocks along the land surface as they creep through valleys toward coastal waters. The process produces a fine-grained powder of silt and clay called glacial flour that accumulates underneath and around glaciers. This powder often accumulates in deltas and in meltwater lakes and streams that form along the edges of these slow-moving rivers of ice. Since the particles are so fine, they are slow to sink and often remain suspended in water longer than other types of sediment.

The presence of silt can sharply change the appearance of water. When sunlight hits silt-rich water, particles absorb the shortest wavelengths: the purples and indigos. Water absorbs the longer wavelengths: reds, oranges, and yellows. That leaves mainly blues and greens that get scattered back to our eyes, often giving silty water a striking turquoise color. Water full of glacial flour can also appear milky green or brown depending on lighting conditions and the concentration of the silt.

The Operational Land Imager (OLI) on Landsat 8 acquired this image of glacial meltwater draining from Frederikshåb Isblink and mixing with the darker waters of the Labrador Sea. Frederikshåb is a lobe-shaped piedmont glacier in southwest Greenland that flows downward from the Greenland Ice Sheet, winds through a series of valleys and nunataks, and then flattens out on a delta along the coast. Ice from Frederikshåb has dammed up several adjacent valleys, turning them into large meltwater lakes full of milky green water and glacial flour.

Ocean currents had carried two plumes of silt about 40 kilometers (25 miles) to the south when Landsat 8 acquired this image on November 15, 2021. However, that was not the only day when satellites captured striking images of silty plumes stretching into the Labrador Sea. On November 10, an unusually narrow sediment plume stretched more than 180 kilometers (120 miles) to the east.

Silty plumes coming from Frederikshåb and other glaciers in Greenland are actually quite common. According to one analysis of satellite data, Greenland delivers about 8 percent of all the sediment deposited in the oceans each year even though it provides just 1 percent of the total fresh water. About 15 percent of Greenland’s glaciers—Frederikshåb among them—deliver more than 80 percent of all the sediment from the island. The researchers also found evidence that the volume of suspended sediment delivered to the ocean from glaciers in this part of Greenland has increased substantially in recent decades as the pace of retreat has quickened.

While increased rates of ice loss in Greenland are a worrisome sign for future sea levels on Earth, some scientists think that an increasing abundance of sand and glacial flour deposited along Greenland’s coasts could have some practical uses for Greenlanders. The sediment could be collected to help relieve global shortages of sand, according to some researchers. Other scientists are looking into whether Greenland’s glacial flour could be used as a fertilizer for crops.