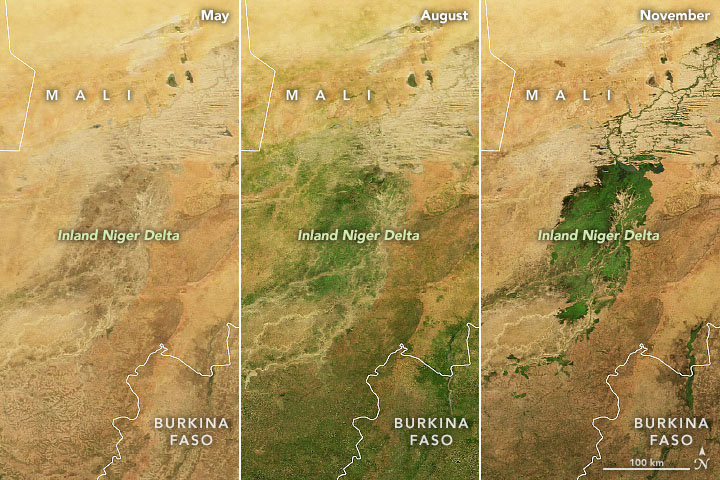 A Seasonal Emerald in the Sahel

It is one of the world’s most productive wetlands, even though it is mostly dry for nearly half of each year. Depending on the abundance and timing of rainfall upstream, the inland delta of the Niger River in Mali typically floods with water from roughly August to December. The result is a seasonal burst of green vegetation at the intersection of the Sahara Desert and the Sahel.

Inland deltas generally occur where rivers split and branch out across inland depressions, valleys, or former lake beds, often in arid areas. According to geomorphologist and NASA Earth scientist Justin Wilkinson, there are at least 86 inland deltas—sometimes referred to as megafans—spread across Africa. The Inland Niger Delta is the largest in western Africa.

The waters that bathe this delta originate in the Guinea Highlands, where wet season rains usually start to fall in July and then wind their way northeast into Mali on the Niger River. Upon reaching the southern reaches of the Inland Niger Delta, the waters spread out across floodplains and swamps full of reeds and wetland grasses (particularly bourgou). The northern portion of the delta is full of branching sand ridges and drying stream channels that emerge from the wetlands as the season progresses.

The progression of this greenup is shown in the natural-color images above from May, August, and November 2021. Each image is a monthly composite view built from data acquired by the Moderate Resolution Imaging Spectroradiometer (MODIS) on NASA’s Aqua satellite. (The composite approach allows a cloud-free view in a region that can often be cloudy.) The image below, acquired on November 16, 2021, by the Operational Land Imager (OLI) on Landsat 8, shows a closeup of the sand ridges in the northern half of the delta. 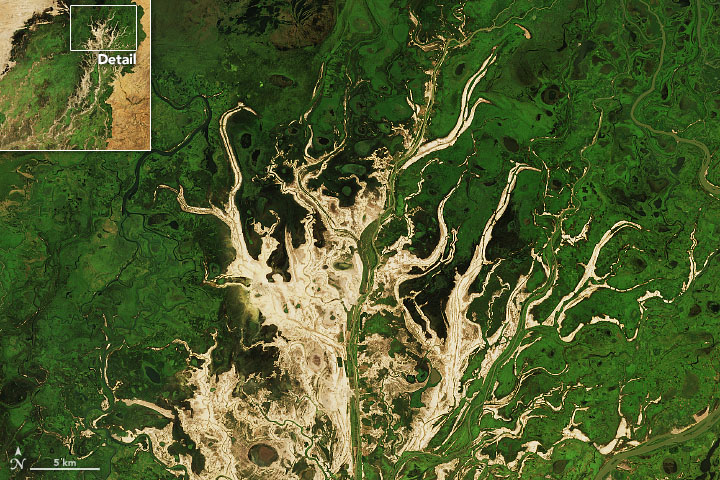 The Niger River runs more than 500 kilometers (300 miles) across the flatlands and channels of the inland delta before merging again and continuing into Niger, Benin, and Nigeria. By the time the seasonal pulses of river water reach the northeast part of the delta, water levels are usually dropping in the southwestern part. Wilkinson added that the greenup occurs in the “active lobe” of the megafan delta, which is actually twice as large as the area shown above.

The waters in portions of the river and delta can rise and fall by as much as 6 meters (20 feet) from dry season to wet season and back. Wilkinson noted that nearly 60 percent of the river’s discharge is lost along the way to evaporation in the delta and to absorption by the wetland soils and the plants that thrive here seasonally.

Birds, fish, and other wildlife flock to this area in the flood season, including West African manatees. At least one million people draw a livelihood from the inland delta through fishing, rice farming, and livestock herding and grazing.