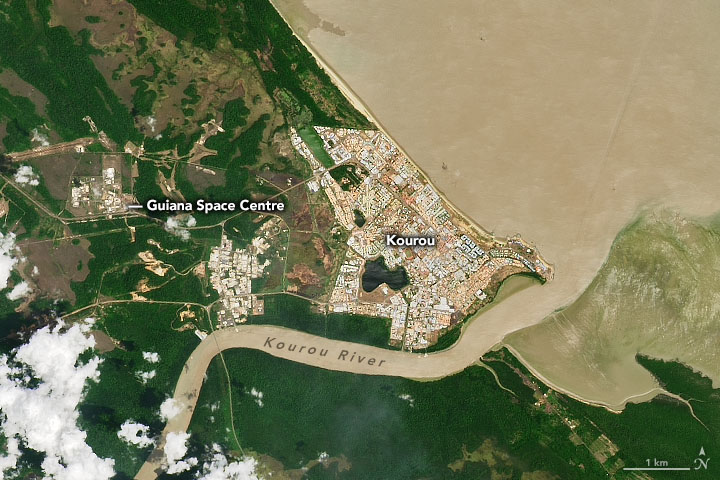 Reaching for the Stars from Kourou

In early October 2021, the James Webb Space Telescope arrived in Kourou, French Guiana, where it is scheduled to launch from Europe's Spaceport in mid-December. Once deployed, Webb—a collaboration between NASA, the European Space Agency (ESA), and the Canadian Space Agency (CSA)—will be the world's largest and most powerful space telescope.

Before its sea voyage, the telescope was folded for the last time at Northrop Grumman's facility in Redondo Beach, California. It was then loaded aboard the French ship MN Colibri, which sailed through the Panama Canal and up the mouth of the Kourou River, from which sediment had to be dredged to accommodate the large ship's draft.

The natural-color images on this page, acquired by the Operational Land Imager on Landsat 8 on October 9, 2018, show the area around the spaceport, also known as the Guiana Space Centre. Also visible are the mouth of the Kourou River and, about 16 kilometers (10 miles) offshore, the notorious Devil's Island, a rocky, narrow outcrop that was operated as a French penal colony from 1852 to 1953. 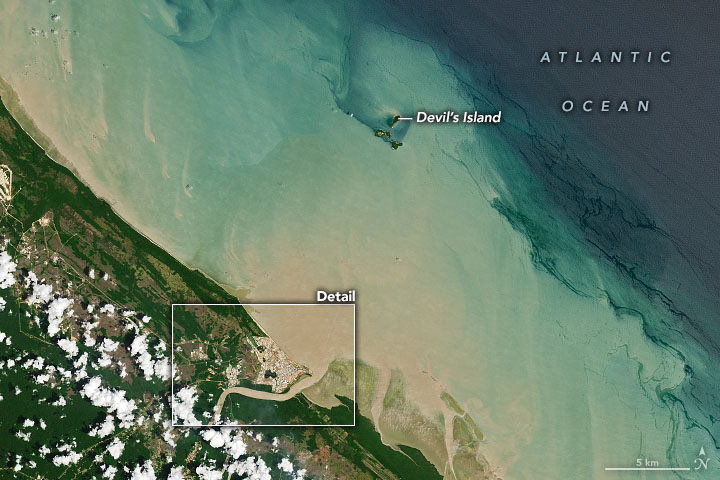 The facility's location, just 500 kilometers (300 miles) north of the Equator, gives a boost to rockets launched to the east—an extra 460 meters per second of speed due to Earth's rotation. The position on the northeastern coast of South America also provides clear launch trajectories to the north and east for both polar-orbiting and geostationary satellites, taking them out over the ocean and away from population centers.

The site was also chosen for its low risk of cyclones and earthquakes. French Guiana's stable, crystalline basement rocks date back 2.2 billion years to the Paleoproterozoic Era, which also give this "overseas department" the claim to the oldest rocks in France.

The launch of the James Webb Space Telescope in December 2021 will be the culmination of more than two decades of work by a team of 10,000 people, spanning 14 countries and 29 U.S. states. Commissioning will take six months, during which time Webb will carry out the most complicated series of deployments of any NASA mission ever.

The immense telescope had to be folded to fit inside the fairing of the Ariane 5 spacecraft, the only rocket large enough to hold it. Once in space, the telescope's final destination is the second Lagrange Point (L2), a stable gravitational point 1.5 million kilometers from Earth where it will orbit the Sun. The trip to L2, four times the distance from the Earth to the Moon, will take a month. Upon arrival at L2, Webb will have to do "origami in reverse," as it unfolds its mirror and deploys the sunshields, said Alphonso Stewart, the Webb deployment systems lead at GSFC.

The launch is only the beginning for the community of astronomers, astrophysicists, and cosmologists who anticipate using the telescope to resolve unanswered questions about the origins of the universe. Webb's 6.6-meter mirror has six times the collecting power of the Hubble Space Telescope, which collects light in the visible, ultraviolet, and a portion of the near-infrared spectrum. Webb will collect light in the red, and near- and mid-infrared range of the spectrum. This will allow it to see through massive clouds of gas and dust that are opaque to telescopes like Hubble, and to detect light from the early universe that has been stretched by its expansion and "red shifted" into the infrared part of the spectrum.

Like a veritable time machine, Webb will allow scientists to look back 13.5 billion years to the first light in the universe and see how the first stars and galaxies formed and evolved over millions of years.