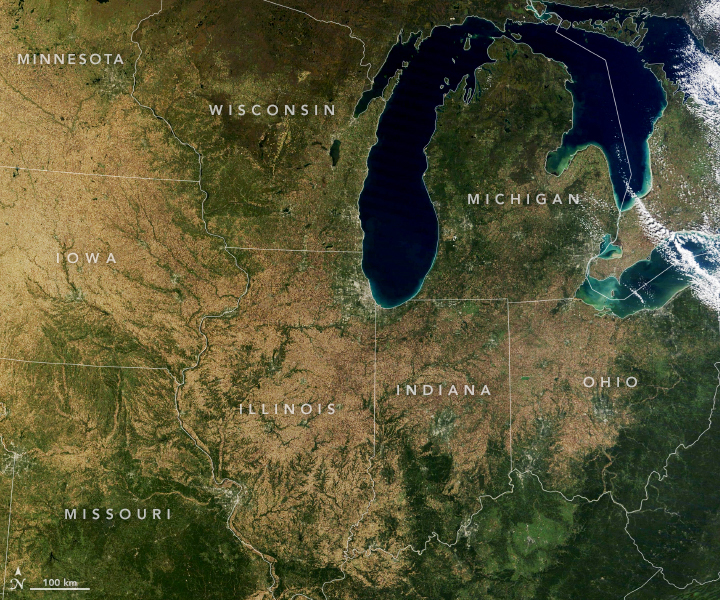 More than one-third of the world’s corn is grown in the United States, and the largest share of it comes from a swath of land across the Midwest. On October 18, 2021, NASA’s Terra satellite acquired this unusually cloud-free view of that region just as the corn harvest was nearing its end, the stalks from most crops had turned yellow and brown, and some bare soil was visible again.

According to the U.S. Department of Agriculture (USDA), corn is grown in most states, but the highest concentration of cropland devoted to this coarse grain is found across the “Midwest Corn Belt.” Together Iowa and Illinois grow and harvest about one-third of the entire U.S. crop, and each state alone produces more corn than many countries.

The natural-color image above was acquired by the Moderate Resolution Imaging Spectroradiometer (MODIS) on Terra. The map below shows lands that were planted with corn in 2020 (marked in yellow). The map was built from the Cropland Data Layer product provided by the National Agricultural Statistics Service, which includes data from the USGS National Land Cover Database and from satellites such as Landsat 8, ResourceSat-2, and Sentinel-2. 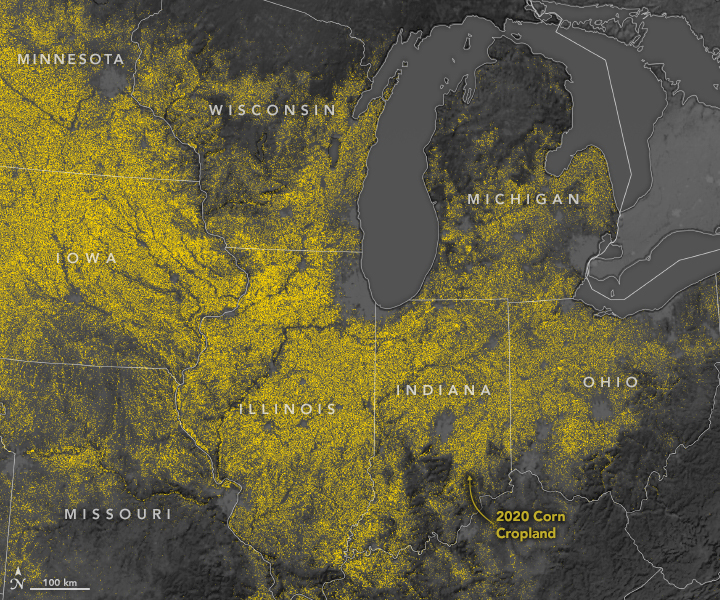 In its October 2021 report, USDA noted that corn production was up 3 percent this year, with an estimated 15 billion bushels of corn harvested from 93.3 million planted acres. Record-high yields were reported in ten states, including Illinois, Indiana, Kentucky, Michigan, and Ohio (all shown above).

That vast corn supply has three primary uses. About one-third is used to feed livestock either directly or through animal feed products. (Corn provides the carbohydrates while soy provides the protein.) Another third ends up as ethanol, a fuel additive to gasoline. The rest of the corn crop is consumed in food and drinks by people in the U.S. and abroad. The largest importers of U.S. corn include Mexico, South Korea, Japan, and Colombia.

In a new NASA-led study released on November 1, 2021, scientists estimated that global yields of corn (maize) and wheat could be affected by climate change as soon as 2030. Over the next century, maize yields could decline as much as 24 percent in some regions due to rising temperatures, changing growing seasons, increasing atmospheric carbon dioxide levels, and more erratic rainfall.

Other NASA-funded scientists are using satellites to study soil loss over time and to develop tools to support farmers as they adopt conservation techniques. According to some estimates, the United States loses about five tons of soil per acre each year, nearly 10 times the rate at which it forms. Researchers recently used machine learning and data from Landsat, Terra and Aqua MODIS, and ESA’s Sentinel-1 to show how conservation tillage could affect yields across the Corn Belt. They found that long-term, low-till corn fields actually experienced an average yield increase of 3.3 percent compared to more traditional tilling.