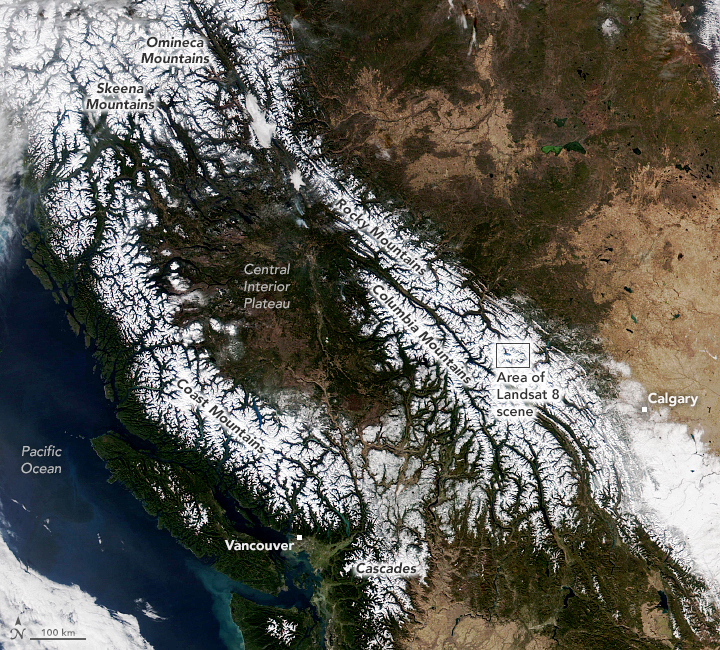 The U.S. and Canadian West have been hit with wave after wave of Pacific moisture in recent weeks, producing substantial amounts of rain and snow across the region. But between storm systems, clear skies opened up for nearly a thousand miles from the coast to the interior, giving satellites a rare cloud-free view the region’s major mountain ranges.

The Visible Infrared Imaging Radiometer Suite (VIIRS) on the NOAA-20 satellite acquired this image during the widespread “unusually pleasant” weather on October 31, 2021. Snowcapped peaks are visible across numerous ranges and subranges, from the Coast Mountains in British Columbia to the Rockies in western Alberta.

Some of the highest mountain peaks stay white year-round, capped with snow and glacial ice that survive summertime melting. But compared to August 2021, snow cover spanned a much larger area in late October following the series of storms. In the week prior to this image, atmospheric rivers carried copious amounts of rain to lowlands around Vancouver and heavy snow at higher elevations. East of the Rockies, Calgary received its first major snowfall of the season.

The snow in Calgary is considered on-time for the season. And in Western Washington, meteorologist Cliff Mass noted “we are now in the season of moisture,” when the jet stream typically brings evenly spaced systems of rain. This is also the time of year when the Cascades usually start to accumulate snow. All of this moisture has eased drought in parts of the Pacific Northwest, and more rain, snow, and cold temperatures are expected throughout winter as La Niña returns for a second year in a row. 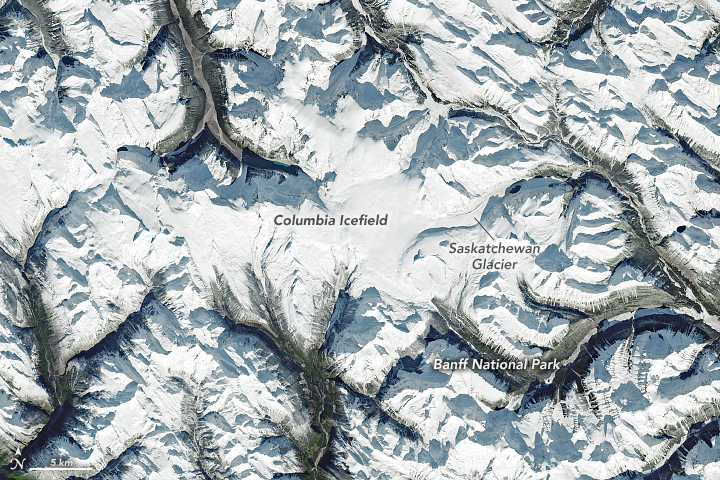 But the seasonably cool and wet conditions have not healed the damage from a summer of extremes. Notably, trouble looms for some areas of “permanent” ice hit hard by high temperatures and smoky fires in the summer of 2021. With data from airborne surveys, scientists found a particularly extreme amount of melting on the Columbia Icefield—the largest ice mass in the Canadian Rockies.

The icefield is visible in this image, acquired on October 31, 2021, by the Operational Land Imager (OLI) on Landsat 8. The icefield spans the provinces of British Columbia and Alberta, as well as Jasper and Banff National Parks. Saskatchewan Glacier, the icefield’s largest outlet glacier, forms the headwaters of the North Saskatchewan River—an important source of freshwater for communities downstream.

In an interview with CBC Edmonton, glaciologist Brian Menounos of University of Northern British Columbia noted that the icefield this year saw its most extreme melting since the airborne surveys began in 2017. The terminus, or “foot,” of Saskatchewan Glacier thinned by about 10 meters (33 feet). Menounos attributed the exceptional melting to a summer heatwave as well as soot from fires, which can land on glaciers and accelerate melting. Scientists think Saskatchewan Glacier could be mostly gone by the end of the century.