The Floating Logs of Spirit Lake

More than 40 years after the explosive eruption of Mount St. Helens, relics from the blast continue to haunt nearby Spirit Lake. The remains of thousands of trees that were violently stripped from the mountainside in 1980 still float on the lake in 2021. But the log mat is more than a reminder of the volcano’s destruction; scientists think it has become an important part of the lake’s ecosystem.

Spirit Lake is located just north of Mount St. Helens, in the Cascade Range of the Pacific Northwest. Amid a magnitude 5.1 earthquake on May 18, 1980, the volcano’s north flank let loose—the largest-known landslide in recorded history. That was followed by a lateral blast and shock wave as the eruption unfolded. The water in Spirit Lake was temporarily displaced but eventually flowed back into the basin, setting afloat the remains of blasted and uprooted trees.

According to Jim Gawel, an environmental engineer at University of Washington’s Tacoma campus who studies the lake, logs covered more than 70 percent of the lake’s surface immediately after the eruption. Many have since sunk, littering the lakebed with woody debris. Logs now cover about 20 percent of the lake—a number that has been slow to change in recent years. 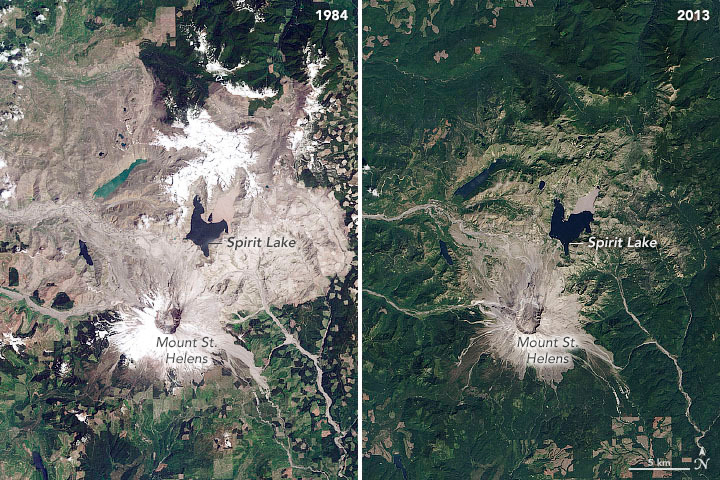 However, the position of the log mat is actually quite dynamic. The animation at the top of this page, built with five images acquired by the Operational Land Imager (OLI) on Landsat 8, shows the log mat zipping around the lake from spring to autumn in 2018.

Gawel explained that the movement is driven by changes in the wind. On seasonal timescales, logs are most often found at the north end of the lake during the spring and summer due to prevailing winds. By autumn (the last image in the animation) winds usually push the logs to the south side.

The logs can also move significantly over the span of a day. When winds die down, often during the nighttime, the logs spread out. Then as winds pick up during the day, the logs are pushed into a tight cluster. “The logs can move across the lake in 30-60 minutes if the wind shifts,” Gawel said, “unfortunately trapping researchers occasionally.” 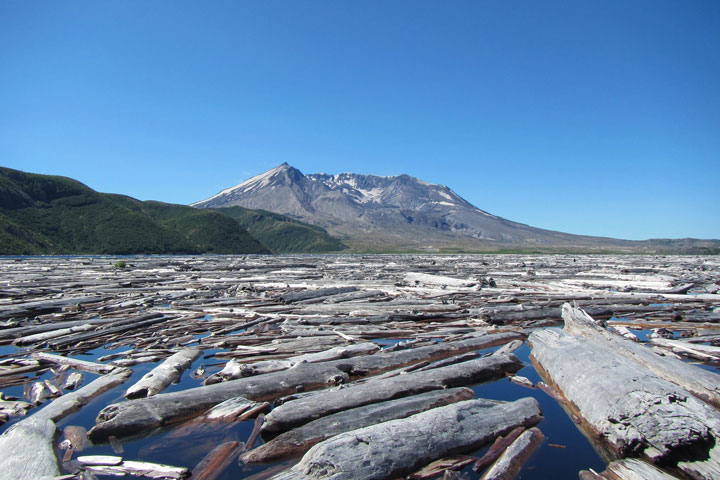 In the field, Gawel has been studying how all this movement could be influencing the lake’s ecosystem. Winds grind the logs together with such force that the logs “shed” carbon and nitrogen into the lake. The wood itself adds organic carbon to the lake sediments. Meanwhile, algae and bacteria growing on the logs can take nitrogen from the atmosphere and convert it into forms more useable by other aquatic life, which in turn contributes to the lake’s food web, including some sizeable rainbow trout. The magnitude of the phenomenon is still being investigated.

Spirit Lake’s log mat is uniquely large and undisturbed, making it a good natural laboratory for scientists, but it is not the only log mat in the area. Other lakes within the blast zone—St. Helens Lake, Castle Lake, and Grizzly lake—also contain some floating logs. And elsewhere, landslides and avalanches have had a similar effect, which is why logs are often found in the lakes of steep-sided alpine areas.

“More lakes would have log mats, but often logs are removed for recreation and timber harvest,” Gawel said. “We would love to learn of other lakes in the world with large numbers of floating logs for comparison to Spirit Lake.”