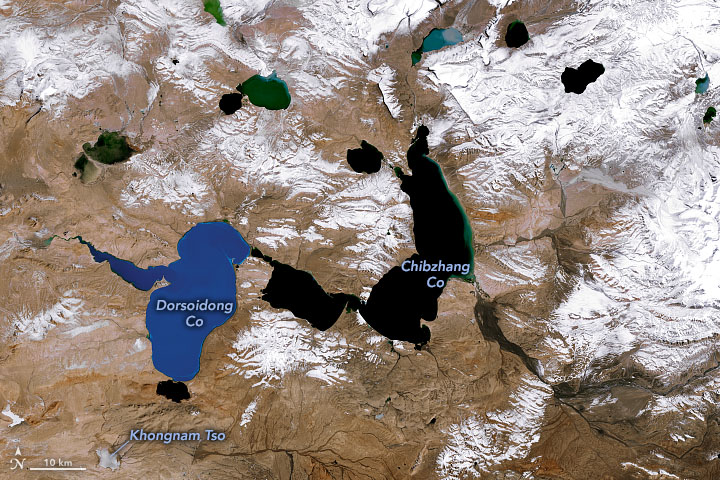 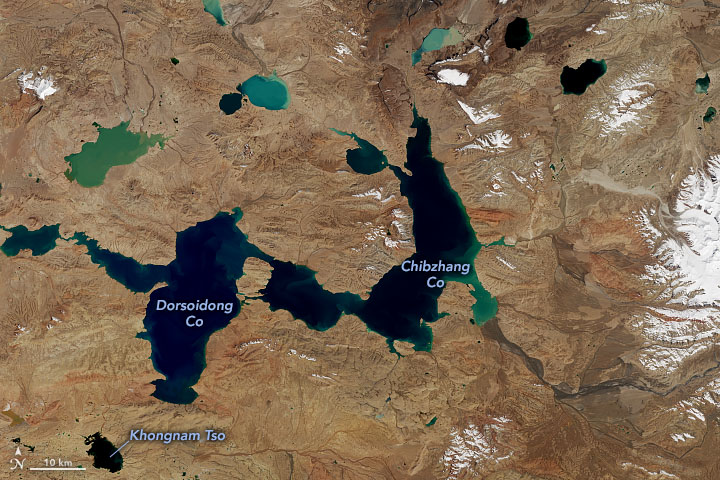 Glaciologists often call the Tibetan Plateau and its many mountain ranges the “Third Pole” because the rugged, high-elevation landscapes contain the largest reserve of freshwater outside the polar regions. Much of that water is stored for now within tens of thousands of glaciers scattered across the region. However, rising temperatures, accelerating ice loss, and meltwater runoff are starting to change that.

These images of lakes west of the Tanggula Mountains—a small range in the central part of the Tibetan Plateau—offer a view of changes caused, in part, by retreating glaciers. The first image was acquired in October 1987; the second image shows the same area in October 2021. The two largest lakes—Chibzhang Co and Dorsoidong Co—have grown larger over time as the mountain glaciers have thinned and shrunk. (Note that some of the differences between the images are due to differences in snow cover, but notice in the large downloadable images here and here that the front edge of the glaciers have retreated significantly.)

The color difference between the two lakes in the 1987 image was caused by the two lakes being separated by a thin strip of land. Dorsoidong Co’s meltwater came from glaciers in mountains to the west; Chibzhang Co’s came from glaciers to the east. Dorsoidong Co’s water likely had more suspended sediment on October 12, 1987, making the water appear lighter blue. The two lakes merged into one in the mid-2000s when rising water levels submerged the strip of land.

According to one team of researchers who analyzed decades of Landsat imagery, the area of the lakes grew by 23 percent between 1976 and 2017. Likewise, satellite radar altimetry observations indicate the lakes have become much deeper over time. Data from NASA’s Global Water Monitor show that the depth of the channel that connects the two main lobes of the lake increased by about 8 meters (26 feet) between the early 1990s and 2021.

Multiple processes affect the size and depth of lakes in this area: the amount of annual precipitation, the rate of evaporation, and the amount of runoff from melting glaciers and permafrost during summer months. Chibzhang Co and Dorsoidong Co are filled by water from both precipitation and melting glaciers, but a group of smaller lakes to the southwest (including Khongnam Tso) receive most of their water from precipitation. By analyzing decades of satellite data for both types of lakes, researchers found that water levels were much steadier in the lakes that received water from glacial melting. In fact, about half of the overall increase in the size of Chibzhang Co and Dorsoidong Co appeared to be driven by glacial melting.

These two lakes are not the only ones on the Tibetan Plateau that are getting larger. In another project, scientists used Landsat data to compare the number of lakes on the Tibetan Plateau and the area covered by lakes in 1977 versus 2014. They found that the number of lakes had increased by 235 and the area covered increased by 18 percent. A more recent analysis of ICESat altimetry data found that the depth of 58 of 62 lakes showed rapid growth between 2003 and 2018—an average of 0.3 meters per year.