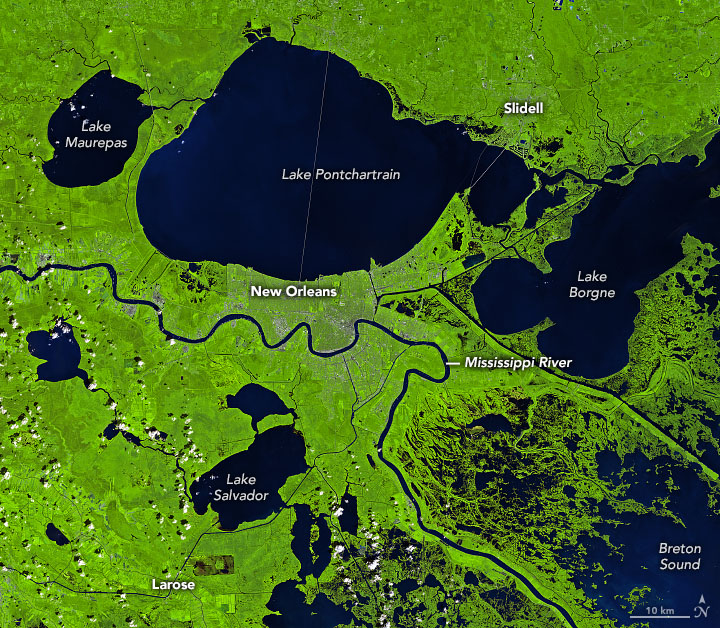 A Changed Landscape in Southern Louisiana

Hurricane Ida may have moved on, but the web of problems the powerful hurricane left behind after striking southern Louisiana remain. In many of the hardest-hit communities, access to power, air conditioning, and gas remains a challenge. Large numbers of homes have been destroyed or severely damaged. Some key roads and bridges are out, and returning residents are facing curfews and boil water warnings.

Five days after catastrophic storm surge, winds, and downpours pummeled the Mississippi River Delta, the Operational Land Imager (OLI) on Landsat 8 acquired imagery of the storm-damaged region. The false-color images above show a portion of far southern Louisiana, including the Barataria Basin and Breton Sound, on September 19, 2015 (left) and September 3, 2021 (right). While Landsat 8 collects new imagery of this area every two weeks, more recent images from 2016-2020 had significant cloud cover.

The image combines red, near-infrared, and short-wave infrared wavelengths (bands 5-4-3) to make it easier to distinguish between water (dark blue) and vegetation (green). Water with more suspended sediment appears lighter blue. The suspended sediment looks brown in the natural-color version of the same image (below). 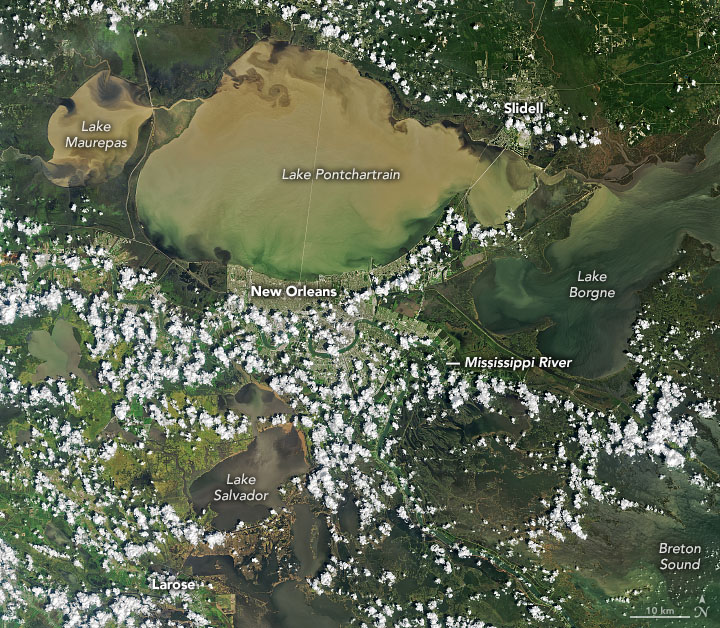 Five days after the storm, many water bodies were still discolored by sediment stirred up by rain and floods. Floodwaters still swamped areas along many rivers, coasts, and lakes. Damaged or missing marsh vegetation left large patches of open water, especially in parts of the Lafourche, Jefferson, and Plaquemines parishes. The image below shows a more detailed view of an area in Lafourche Parish near Larose. The large rectangular feature is a low-lying farm built on reclaimed land and protected by a levee and pumping system. (Check Worldview to see a cloudier pair of images that show marshes in this area before Ida hit in August 2021 compared to after the storm in September 2021.)

“A combination of flooding, erosion, and defoliation during Ida likely created many of the new patches of open water visible in the Landsat image,” explained Marc Simard, the principal investigator for NASA’s Delta-X mission, a field campaign to the Mississippi River Delta that was conducting research on sediment and marsh dynamics when Ida approached. After canceling some field work while Ida was nearby, the Delta-X team restarted flights a few days later and has been using plane-based radar, including the UAVSAR and AirSWOT sensors, to assess the effects of the storm. In mid-September, when waters have receded, teams will begin taking samples from the ground again. 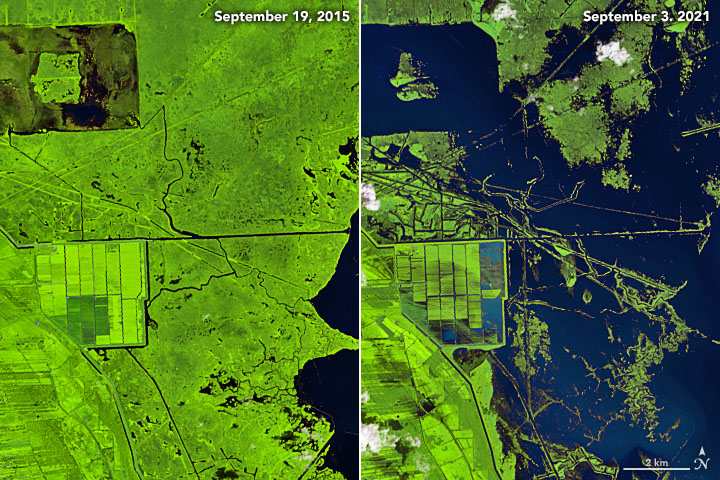 “One of the interesting things to watch will be to see if the stark changes you see in this Landsat image prove to be temporary or long lasting,” said Simard. “Some of the losses may have been floating plants that washed away or plants that simply lost their seasonal leaves and will probably grow back. Other were uprooted and will no longer offer the coastal protection they once did.”

Among the things that Delta-X teams will be tracking closely is how salinity levels and the amount of sediment in water shifts in the region over time. “If the salinity gradients have changed because of Ida and salinity increases inland, it may kill off freshwater marshes, and they will be replaced by salt marshes,” said Simard. The team will also be watching how much sediment is coming in from rivers and available to replenish eroded coastal areas or bottom sediments that were displaced during the storm. For instance, topographic features in the bottom sediments determine whether vegetation can thrive.

“I think we’ll see that healthy wetlands with plenty of incoming sediment will be far more resilient than wetlands which receive little or no sediment from river discharge,” said Simard. “Our hope is that the models being developed by Delta-X scientists will provide a realistic insight into the vulnerability and resilience of wetlands in this region in the long-term.”

Prior to the storm, the wetlands in this area were losing land at one of the fastest rates in the world due to the combined effects of upstream dams and levees that trap or divert sediment, subsidence of the land, and rising sea levels. Subsidence, or sinking of the land, is caused by natural settling and compaction of new delta sediment and by human activities, such as pumping for groundwater or oil.