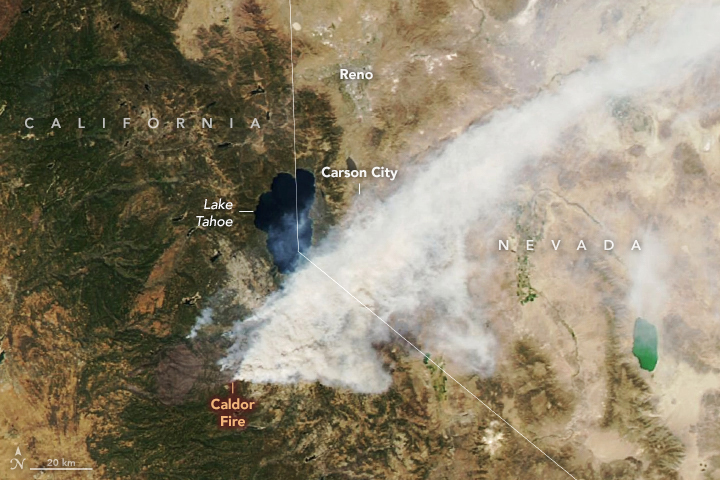 Arc of Fires in the U.S. West

As August 2021 came to an end, 42,647 fires had scorched 4,879,574 acres across the United States in 2021—close to the ten-year average for the first eight months of a year, according to statistics from the National Interagency Fire Center. But among the 83 fires still actively burning on August 31, some were especially fierce; two of them had crossed the crest of the Sierra Nevada for the first time in recent record-keeping.

The largest blazes burned in Northern California, most notably the Caldor and Dixie fires, which together have scorched nearly 1 million acres (1,500 square miles) so far. Smoke from the Caldor fire near Lake Tahoe is visible in the image above, acquired on the afternoon of August 30, 2021, with the Moderate Resolution Imaging Spectroradiometer (MODIS) on NASA’s Aqua satellite. Between ignition on August 14 and the time of the image, the fire had burned more than 170,000 acres. The fire perimeter was 14 percent contained as of August 31.

The Caldor fire spread rapidly amid dry and gusty conditions, prompting officials to expand mandatory evacuation orders to the Tahoe Basin, including South Lake Tahoe, a lakeside city of nearly 22,000 people. According to news reports, Caldor is only the second-known fire to have crested the ridge of the Sierra Nevada, burning from one side to the other. It follows the Dixie fire, which crossed over the ridge earlier in the month. 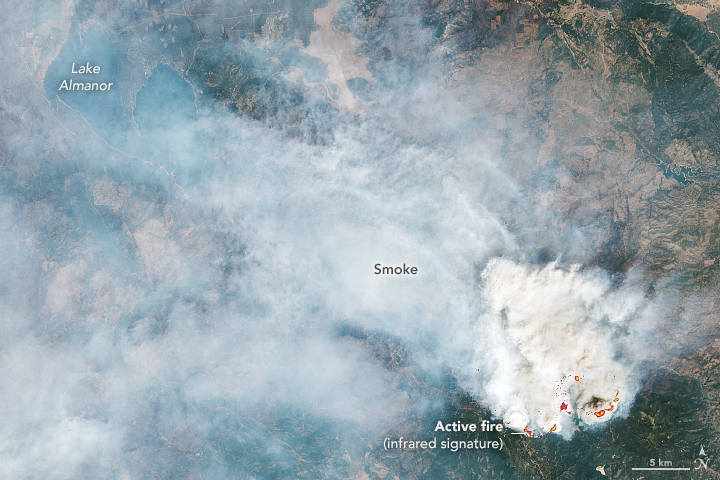 Meanwhile, the Dixie fire continues to spread. Since igniting on July 13, the fire has burned more than 800,000 acres and has surpassed the August Complex to become the second-largest fire on record in California. The Dixie fire was nearly 50 percent contained as of August 31.

Smoke from the Dixie fire is visible in the second image above, acquired on August 28, 2021, with the Operational Land Imager (OLI) on Landsat 8. The infrared signatures of actively burning areas are outlined in red. Evacuation orders have been lifted on the fire’s western side, but they were replaced on August 30 with new evacuation orders as the fire approached Lake Davis. 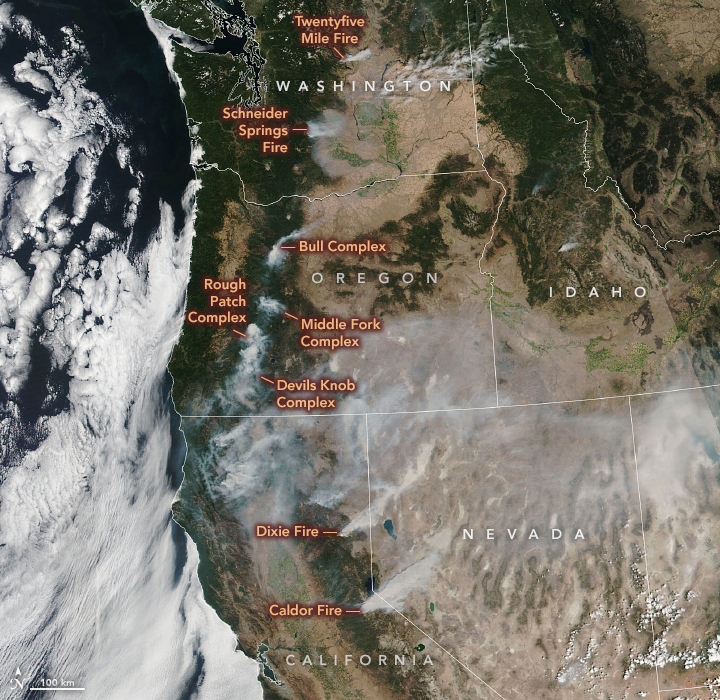 While the Caldor and Dixie fires are the largest, other wildfires are also posing hazards to people, property, and air quality across the U.S. West. On August 29, 2021, the Visible Infrared Imaging Radiometer Suite (VIIRS) on the NOAA-NASA Suomi NPP satellite acquired this image showing the ominous arc of fires across Washington, Oregon, and California.