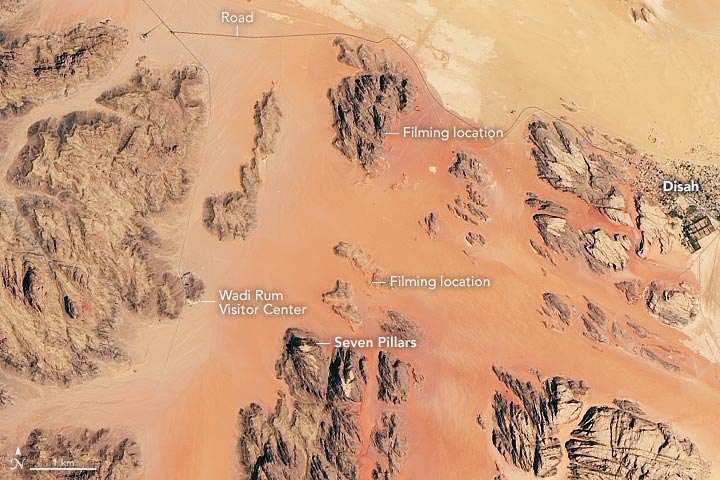 Today’s story is the answer to the August puzzler.

Wadi Rum looks like few other places on Earth. In fact, the distinctive desert landscapes have inspired more than a few filmmakers to use the valley in southern Jordan as a stand-in for Mars.

Among them was Ridley Scott, director of the 2015 film The Martian. Scott made frequent use of Wadi Rum’s scenery, often bringing viewers along on panoramic tours of surreal inselbergs, spires, and turrets of rock as fictional astronaut Mark Watney tries to survive and make his way home from Mars.

When viewed from space, it is easy to see why Scott chose this place. The colors and textures of Wadi Rum—shown in the natural-color Landsat 8 image above—are a close match to those found on Mars. The area, which appears in the movie on multiple occasions, features towering sandstone and granite inselbergs that punctuate valleys blanketed with iron-rich sand. It includes one of the region’s most iconic rock formations: the Seven Pillars of Wisdom, a group of natural stone pillars that jut from the northern edge of Jebel Um Ishrin.

Many of the prominent rock formations in Wadi Rum are comprised of partially eroded layers of sedimentary rock—mostly purple and white sandstones—that formed hundreds of millions of years ago when sea levels were higher and the area was muck at the bottom of an ocean on top of a base of granite. After sea levels dropped and exposed the new sedimentary rocks, a combination of tectonic lifting, wind, and water eroded and sculpted them, leaving valleys filled with sand and jagged terrain.

Scott felt the scenery was such a good approximation of Mars that he only made a few changes when editing. He added a background red dust to many shots, and occasionally added computer-generated clouds and dust storms for dramatic effect. “I didn’t do anything but shoot it at the right time, from the right positions,” Ridley told Space.com. “To me, [Wadi Rum] is the Eighth Wonder of the World. It’s incredible.”

Mars aficionados and sci-fi movie buffs can keep an eye out for Wadi Rum in several other movies. Red Planet (2000), The Last Days on Mars (2013), Prometheus (2012), Rogue One: A Star Wars Story (2016), and Star Wars: The Rise of Skywalker (2019) all used Wadi Rum as a stand-in for Mars or other fictional desert planets. “I was in awe of that place, it was really, really special,” actor Matt Damon said of the time he spent filming there. “[It is] one of the most spectacular and beautiful places I have ever seen, and like nothing I’ve ever seen anywhere else on Earth.”