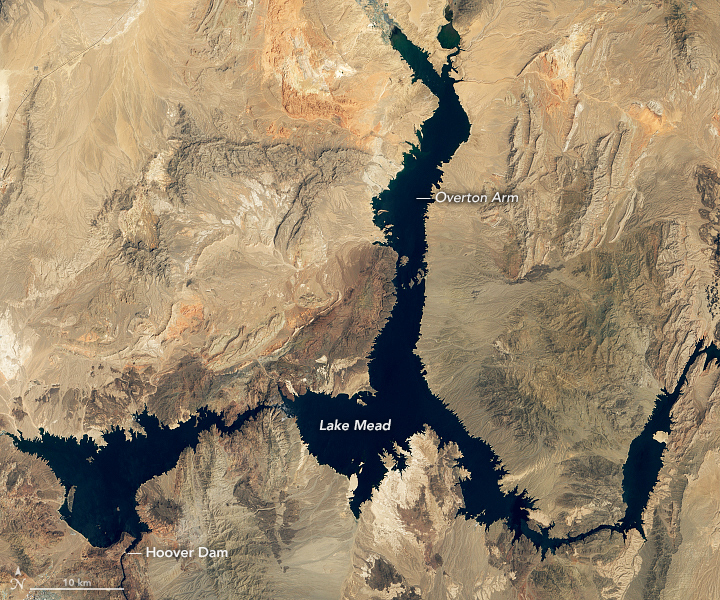 Lake Mead is the largest reservoir in the United States and part of a system that supplies water to at least 40 million people across seven states and northern Mexico. It stands today at its lowest level since Franklin Delano Roosevelt was president. This means less water will be portioned out to some states in the 2022 water year.

As of August 22, 2021, Lake Mead was filled to just 35 percent of its capacity. The low water level comes at a time when 95 percent of the land in nine Western states is affected by some level of drought (64 percent is extreme or worse). It continues a 22-year megadrought that may be the region’s worst dry spell in twelve centuries.

These natural-color images were acquired in August 2000 and August 2021 by Landsat 7 and Landsat 8. The tan fringes along the shoreline in 2021 are areas of the lakebed that would be underwater when the reservoir is filled closer to capacity. The phenomenon is often referred to as a “bathtub ring.”

The lake elevation data below come from the U.S. Bureau of Reclamation, which manages Lake Mead, Lake Powell, and other portions of the Colorado River watershed. At the end of July 2021, the water elevation at the Hoover Dam was 1067.65 feet (325.4 meters) above sea level, the lowest since April 1937, when the lake was still being filled. The elevation at the end of July 2000—around the time of the Landsat 7 images above and below—was 1199.97 feet (365.8 meters). 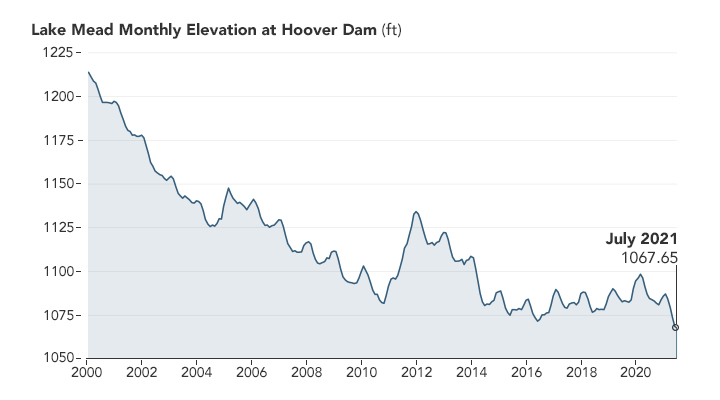 At maximum capacity, Lake Mead reaches an elevation 1,220 feet (372 meters) near the dam and would hold 9.3 trillion gallons (36 trillion liters) of water. The lake last approached full capacity in the summers of 1983 and 1999. It has been dropping ever since.

In most years, about 10 percent of the water in the lake comes from local precipitation and groundwater, with the rest coming from snowmelt in the Rocky Mountains that melts and flows down to rivers, traveling through Lake Powell, Glen Canyon, and the Grand Canyon on the way. The Colorado River basin is managed to provide water to millions of people—most notably the cities of San Diego, Las Vegas, Phoenix, and Los Angeles—and 4-5 million acres of farmland in the Southwest. The river is allotted to states and to Mexico through laws like the 1922 Colorado River Compact and by a recent drought contingency plan announced in 2019.

With the Lake Mead reservoir at 35 percent of capacity, Lake Powell at 31 percent, and the entire Lower Colorado system at 40 percent, the Bureau of Reclamation announced on August 16 that water allocations would be cut over the next year. “The Upper [Colorado] Basin experienced an exceptionally dry spring in 2021, with April to July runoff into Lake Powell totaling just 26 percent of average despite near-average snowfall last winter,” the USBR statement said. ”Given ongoing historic drought and low runoff conditions in the Colorado River Basin, downstream releases from Glen Canyon Dam and Hoover Dam will be reduced in 2022 due to declining reservoir levels. In the Lower Basin the reductions represent the first “shortage” declaration—demonstrating the severity of the drought and low reservoir conditions.” 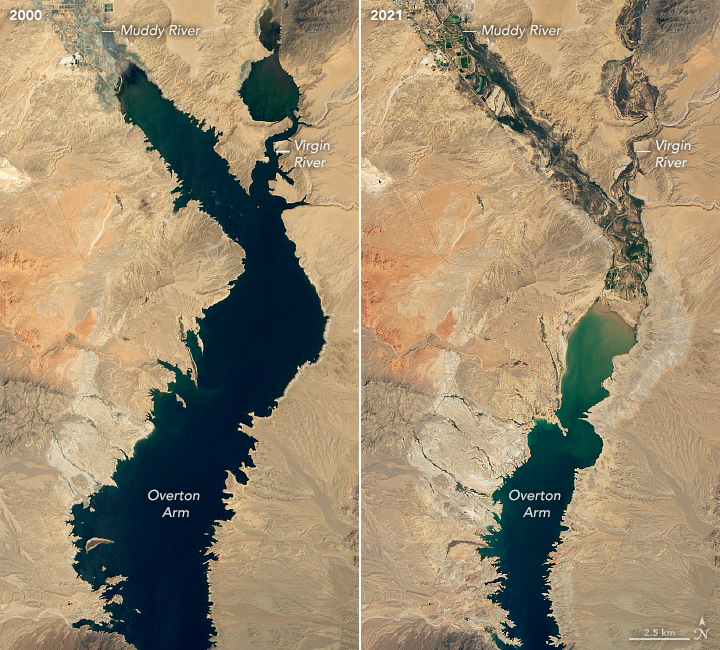