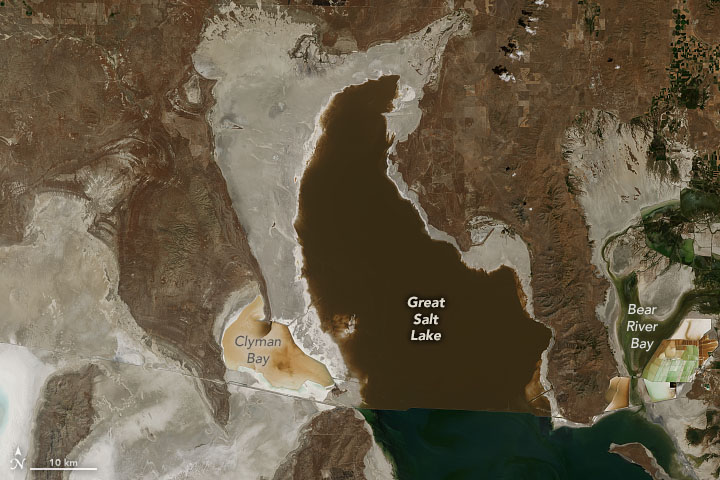 In late July 2021, the Great Salt Lake in Utah reached its lowest water level on record, and it has continued dropping since then. On July 23, the U.S. Geological Survey (USGS) gauge at the Saltair boat harbor at the southern end of the lake recorded the average daily level at 4191.3 feet (1277.5 meters) above sea level, the lowest mark since measurements began in 1875. The previous low was set in 1963.

The Operational Land Imager (OLI) on Landsat 8 acquired images (above) of the north end of the Great Salt Lake on July 29, 2017, and July 24, 2021. Orange-brown areas along the edges of the lake indicate shallow water, while bright tan and white fringes suggest newly exposed portions of the lakebed. Note, too, the depletion of water in Clyman Bay and Bear River Bay. (Landsat also acquired images of the southern end of the lake during a similar dry spell in 2016.)

According to USGS, water levels in the southern part of the lake are usually a bit higher than the northern half because more tributaries flow into the southern section. The lake is divided by a causeway for the Union Pacific Railroad.

The low lake levels are due to recent trends in precipitation and long-term trends in consumption by humans. Snowfall was modest to deficient in many areas last winter, and recent research showed that snow cover in the mountains around the Great Salt Lake melts at least a week earlier now than 20 years ago. Like much of the American West, rainfall has also been sparse here for the past two years. In its August 12 report, the U.S. Drought Monitor noted that 100 percent of Utah was experiencing at least severe drought; 50 percent of the state was in exceptional drought, the highest category.

“Based on current trends and historical data, the USGS anticipates water levels may decline an additional foot over the next several months,” USGS Utah Water Science Center data chief Ryan Rowland said in a July 24 statement. Due to the extreme drought, nearly two-thirds of Utah’s river and stream gauges are reporting below-normal flows.

The Great Salt Lake is the largest water body in the United States after the Great Lakes. It is a terminal basin, which means the water that pours into the lake from rivers and streams has no outlet other than evaporation. This allows salts and minerals to concentrate in the lake such that it is three to five times saltier than the ocean.

For more than 150 years, humans have been taking more water out of this closed basin—for farming, industry, and human consumption—than is flowing into it. Drought may have contributed to the recent drop in the lake, as have higher-than-normal temperatures. But according to scientists, there has not been a significant long-term change in precipitation in the basin.

In a white paper released in 2016, scientists noted that river flow into the basin—from the Bear, Jordan, and Weber rivers—has dropped 39 percent since the middle of the 19th century. The volume of water in Great Salt Lake has shrunk by 48 percent and the lake level has fallen 3.4 meters (11 feet) since 1847.