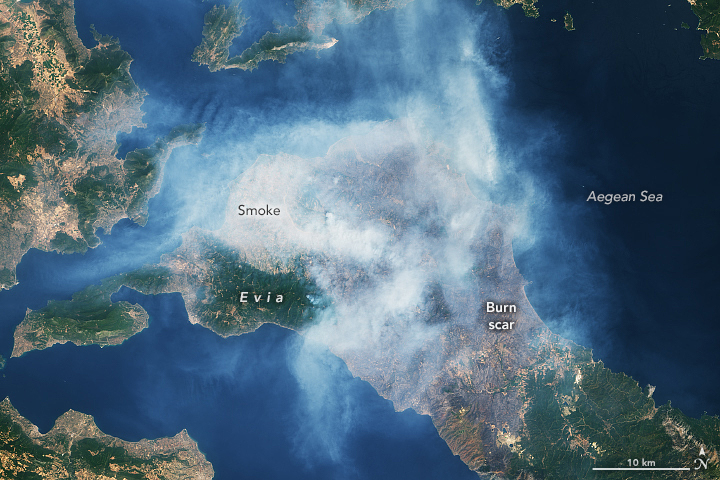 In the first two weeks of August 2021, Greece has endured a series of wildland fires that have charred a large swath of the island of Evia and several areas of the Peloponnese region. The fires followed closely after one of the worst heatwaves in the country since the 1980s, which dried up scarce moisture and left forests primed to burn. Greek Prime Minister Kyriakos Mitsotakis told several news agencies that the fire outbreak has been a “disaster of unprecedented proportions.”

The Operational Land Imager (OLI) on Landsat 8 acquired natural- and false-color views (above) of the north end of Evia on August 10, 2021. The false-color image combines shortwave infrared, near infrared, and red light (OLI bands 6-5-4). In this view, burned vegetation appears dark brown, and greens and yellows indicate a combination of unburned trees and scrub.

On August 8, the Visible Infrared Imaging Radiometer Suite (VIIRS) on Suomi NPP acquired a wider view (below) of the fires and smoke in Greece. NASA Worldview imagery from August 3–11 shows the evolution of the smoke plumes with changing winds. 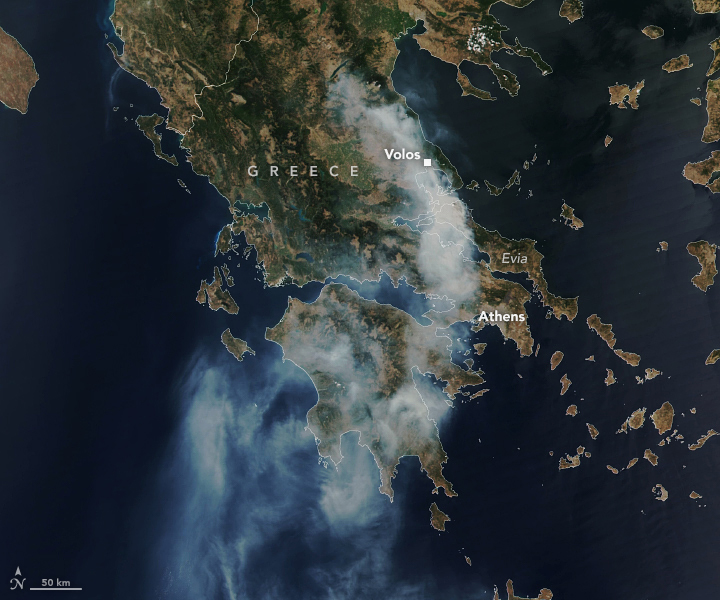 Some of the worst fires in the country have burned on Evia, the second largest island in Greece and a major hub for tourism. Much of the island has been in a state of high fire alert for a week. The Associated Press reported that an estimated 50,000 hectares (123,000 acres) have burned on Evia, as well as hundreds of homes.

Significant fires also broke out near Athens, Olympia, and Arcadia, and 63 organized evacuations have been reported across Greece in the past nine days. Firefighters and equipment have been sent from at least 15 countries to help Greek authorities.

The heatwaves and fires fit with patterns described in the latest assessment report from the Intergovernmental Panel on Climate Change (IPCC), to which NASA-funded scientists contribute. In its summary of climate conditions in Europe, the IPCC noted: “The frequency and intensity of hot extremes...have increased in recent decades and are projected to keep increasing regardless of the greenhouse gas emissions scenario. Despite strong internal variability, observed trends in European mean and extreme temperatures cannot be explained without accounting for anthropogenic factors.”