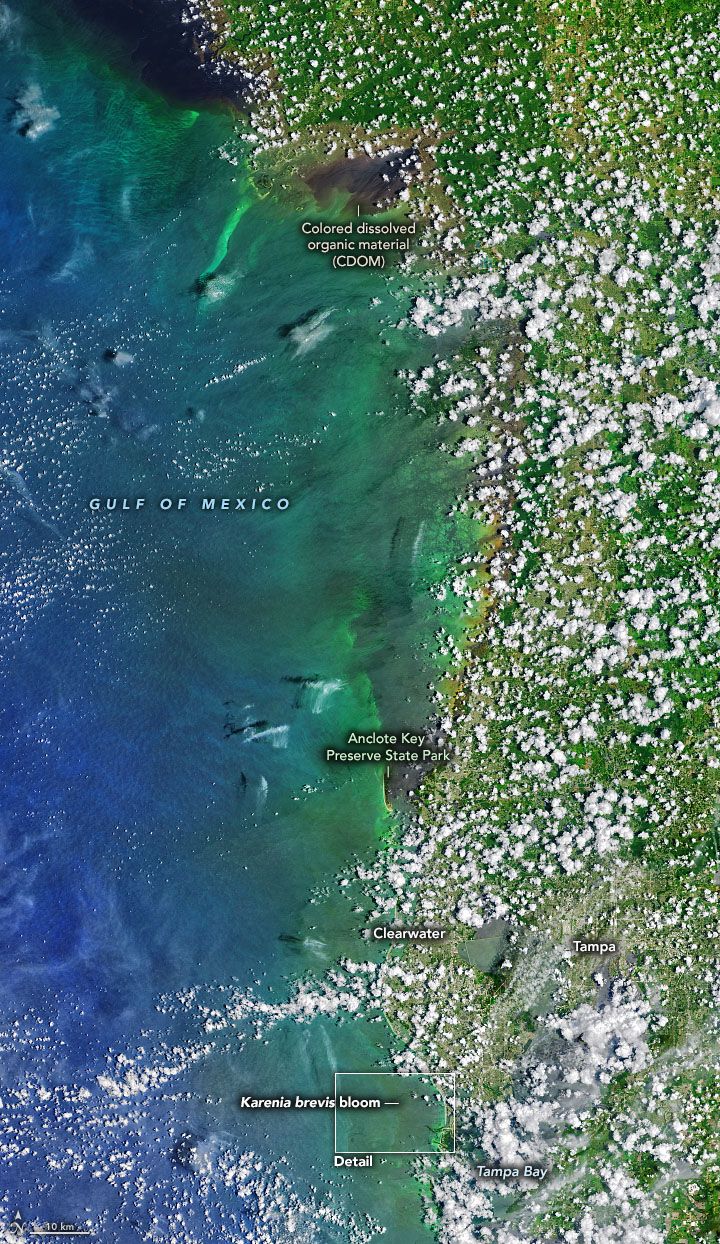 For several months, communities along the west coast of Florida have observed substantial blooms of the harmful algae Karenia brevis. The algae occur naturally in the waters around Florida, but the bloom in 2021 has been particularly bad near Tampa Bay, causing large-scale fish kills in what some people refer to as a ‘red tide’ event. The bloom is also unusual for how early it is occurring.

Karenia brevis is a microscopic algae that, like other phytoplankton, can multiply into massive blooms when there are enough nutrients in the water—often in the autumn along the Gulf Coast. The algae produce neurotoxins that can kill fish and cause skin irritation and respiratory problems for humans, particularly those prone to asthma and other lung diseases. In extreme concentrations, K. brevis can turn water brown, red, black, or green; however, it is not always visible from space.

The natural-color images above and below were acquired on July 14, 2021, by the Operational Land Imager (OLI) on Landsat 8. The scene from Tampa Bay north to Horseshoe Beach shows dynamic coastal waters, with plumes of dissolved organic matter (dark brown to black) running off from the land; shallow seafloors and re-suspended sediment from the bottom (brighter greens and blues); and some hints of algae and phytoplankton (often diatoms) in green. 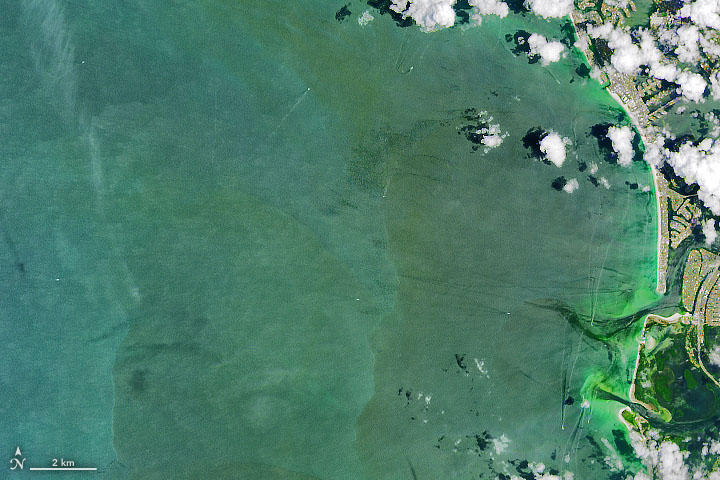 “This Karenia brevis ‘red tide’ bloom is doubly unusual,” said Richard Stumpf, an oceanographer for the National Oceanic and Atmospheric Administration (NOAA). “It is summer, which is rare, and it is intense well into Tampa Bay, which is rare even during a ‘normal’ fall bloom.”

“If a bloom is out on the continental shelf, it is more easily diluted,” said Chuanmin Hu, an optical oceanographer at the University of South Florida (USF). “The bloom this year is so troublesome because it is both inside Tampa Bay and around the Tampa Bay mouth.”

The map below, based on data processed by the NOAA National Centers for Coastal Ocean Science, shows measurements of chlorophyll fluorescence on July 11, 2021. Scientists can use fluorescence and distinct wavelengths of light to detect signatures of algae and phytoplankton amid turbid, churning waters along the coast. The data are collected by the Copernicus Sentinel-3 satellite of the European Organisation for the Exploitation of Meteorological Satellites (EUMETSAT). Similar observations from July 13 are available from the Optical Oceanography Laboratory at the University of South Florida.

“Although Karenia brevis blooms are common to the West Florida Shelf and have been observed in almost every coastal region of the Gulf of Mexico, I have never seen anything like that inside Tampa Bay,” said Inia Soto Ramos, an ocean color specialist from USRA at NASA’s Goddard Space Flight Center (GSFC) and former researcher at USF. “Massive blooms were observed back in the late 1990s, and even the Spanish conquistadors described them in their books. But the bloom this year inside the bay is worrisome. It could be a one-year thing, and hopefully it is. But if water quality in the bay continues to decline, residents should prepare for more blooms, and not only K. brevis.” 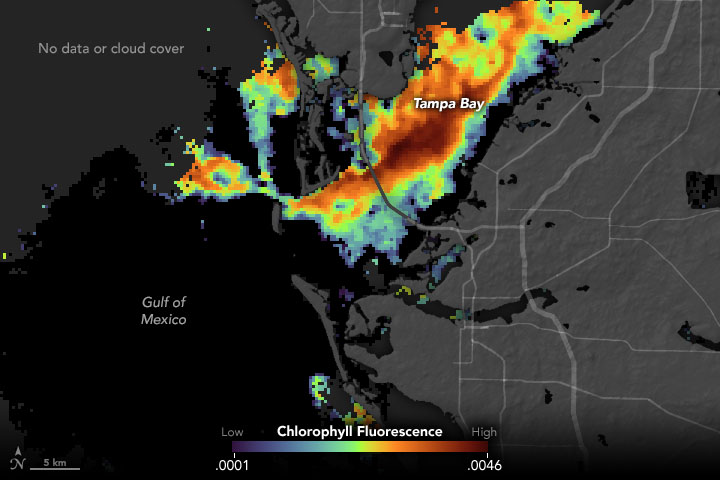 Since early June 2021, Karenia brevis has been abundant along the Gulf Coast from just north of Clearwater to Sarasota. In a July 14 report, the Florida Fish and Wildlife Conservation Commission noted: “A bloom of the red tide organism, Karenia brevis, persists on the Florida Gulf Coast. Over the past week, K. brevis was detected in 107 samples.”

According to the Sarasota Herald-Tribune, coastal work crews have collected more than 600 tons of dead fish and marine life killed by the bloom. On July 15, the city council of St Petersburg asked the governor to declare a state of emergency over the bloom. Officials are still trying to pinpoint the trigger for the event, but many scientists note that the area has been unusually rich with algae-sustaining nutrients in 2021.

“Karenia brevis blooms, although studied for decades, do not follow a strict recipe. Some years, circulation and advection are the main drivers,” said Soto Ramos. “However, we know if there is an excess of nutrients, the algae will utilize them. I think the bloom right now is due to a combination of available nutrients, warm temperatures, and circulation patterns keeping the algae contained within the bay. Once the algae are there, they stay for a while.”

NASA is currently developing the Plankton, Aerosol, Cloud, ocean-Ecosystem (PACE) satellite mission for launch around 2024. The satellite is being designed with sensors tuned to the signatures of blooms. “Whereas heritage ocean color instruments observe roughly six visible wavelengths, PACE will collect a continuum of colors that span the visible rainbow,” said Jeremy Werdell, project scientist for PACE at NASA GSFC. “Its ocean color instrument will be the first of its kind to collect hyperspectral radiometry on global scales, which will allow unique and highly advanced identification of aquatic phytoplankton communities, including potentially harmful algae such as these on the West Florida Shelf.”