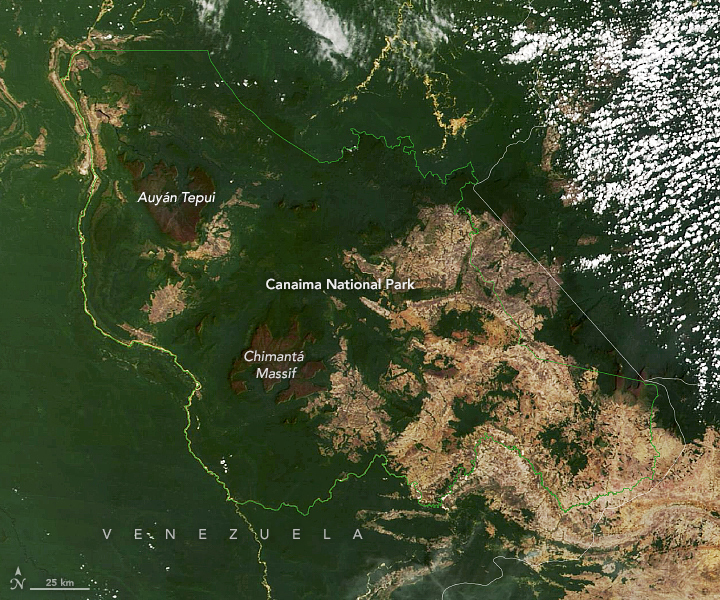 Canaima National Park has inspired many books and movies. After he created the Sherlock Holmes character, Sir Arthur Conan Doyle wrote The Lost World, describing an adventurous ascent of a plateau in the Amazon Basin similar to those found in Canaima. In the movie Up, the main character travels by balloon to fulfill a longtime dream to live in a park that bears a striking resemblance to Canaima. Although fictional, both stories captured the authentic allure of this region.

Decorated with flat-topped mountains, steep cliffs, and dramatic waterfalls, Canaima National Park is one of the most notable landscapes in Venezuela. The Moderate Resolution Imaging Spectroradiometer (MODIS) on NASA’s Terra satellite captured the image above of the park on February 25, 2019. Canaima spans more than 30,000 square kilometers (12,000 square miles), making it one of the largest parks in Venezuela. (Its borders are marked in bright green.)

Tepuis are some of the oldest geologic formations in South America. The table-top mountains are remnants of a once-continuous sandstone plateau that covered a 1.7-billion-year-old granite basement rock. Layers of sand were compressed and cemented together to form sandstone and quarzitic rocks thousands of meters thick. Following tectonic uplift arbout 180 million years ago, the sandstone plateau was broken apart by erosion into isolated mountaintops. 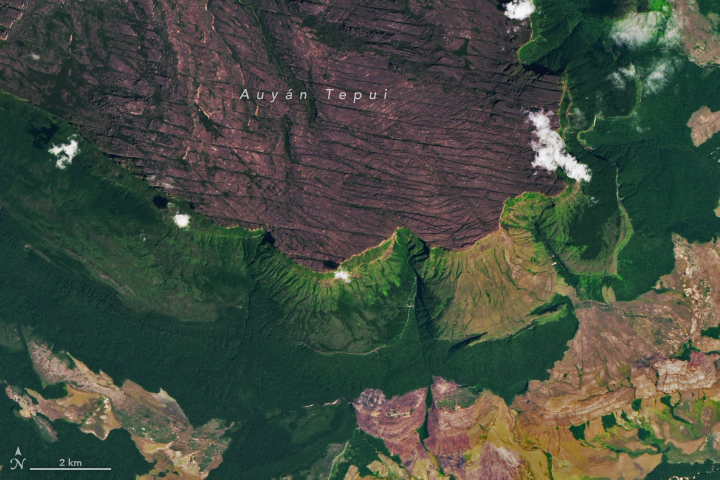 Because tepuis stand high above the forest, they are home to some animal and plant species found nowhere else on Earth. About one-third of the vegetation found on the mountains is endemic. The tepuis host mammals on their lower slopes, including monkeys, jaguars, pumas, and sloths, and several bat species. Reptiles, such as snakes, iguanas, and lizards, are found on the summits and slopes.

One of the most well-known tepuis in the region is the heart-shaped Auyán Tepui, home to the tallest waterfall on land. Angel Falls drops nearly 1,000 meters (3,300 feet)—19 times higher than Niagara Falls. The Operational Land Imager (OLI) on Landsat 8 captured closer views of the park (second and third images on this page) on February 5, 2018. 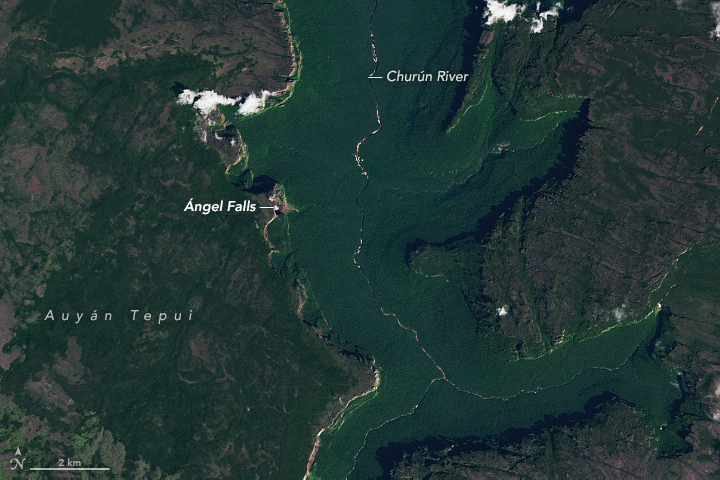 Like many tepuis, Auyán contains extensive cave systems. In 2013, researchers discovered one of the longest quartzite cave systems in the world here. The Imawarì Yeuta caves contain three entrances, three rivers, and at least 22 kilometers (14 miles) of tunnels. Because they run through quartz sandstone, tepui caves are less susceptible to water erosion. They also form slowly—perhaps over tens of millions of years. Researchers have discovered new minerals and new species of bacteria and blind fish in other tepui caves across the region.