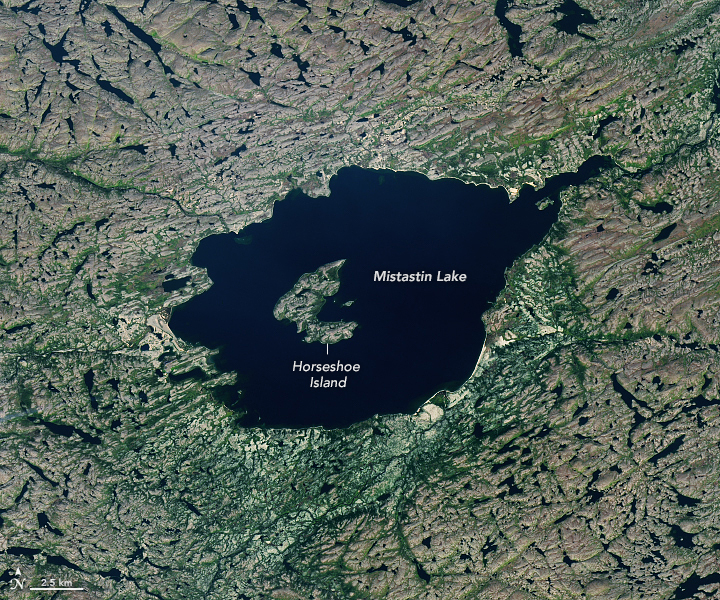 Skies were clear and the waters of Mistastin Lake were placid when the Operational Land Imager (OLI) on Landsat 8 captured this natural-color image of Labrador, Canada, on a fall day in 2017.

The scene would have looked quite different about 36 million years ago when an asteroid smashed into Earth and left an impact crater where the lake (called Kamestastin by the Innu people) now sits. While erosion has changed and obscured some of the features, a 50-meter (164-foot) wall still rings much of the crater. Geologists estimate the original crater had a diameter of about 28 kilometers (17 miles)—about twice the size of the current lake.

Parts of the central peak are also visible in the lake as Horseshoe Island. These mound-like features are often found in the center of large craters as a product of the melting and rebound of subsurface rocks. Meanwhile, the elongated, elliptical appearance of the crater is a result of periods when glaciers slid across this area during several ice ages.

Based on the presence of an unusual diamond-like mineral called cubic zirconia, the asteroid impact must have heated rocks at the site to at least 2370°C (4,300°F). That would be the hottest-known temperature recorded by a surface rock on Earth, according to one team of researchers.