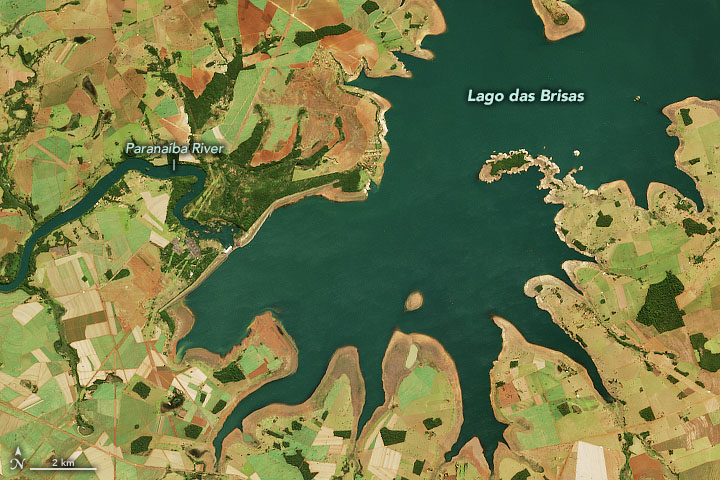 Prolonged dry conditions have caused the worst drought in central and southern Brazil in almost a century, according to Brazilian government agencies. The drought is expected to cause crop losses, water scarcity, and increased fire activity in the Amazon rainforest and Pantanal wetlands.

Low water levels are noticeable around several lakes in the Paraná River basin, home to several hydroelectric dams and reservoirs that help power the region. Seven of the 14 main reservoirs nearby stood at their lowest levels since 1999. Brazil’s Electric Sector Monitoring Committee has eased restrictions on some hydroelectric dams in order to meet electricity needs and prevent power outages.

The Operational Land Imager (OLI) on Landsat 8 captured the images above of Lago das Brisas on the Paranaíba River on June 17, 2021 (right) compared to June 12, 2019 (left). Five nearby reservoirs recorded water levels more than two meters below average (1993-2002), according to the Global Reservoir and Lake Monitor.

News reports state that water levels on the Paraná River are around 8.5 meters (30 feet) below average near the Brazil and Paraguay border. The low water could disrupt cargo ship traffic in the basin and make transportation of goods more expensive. 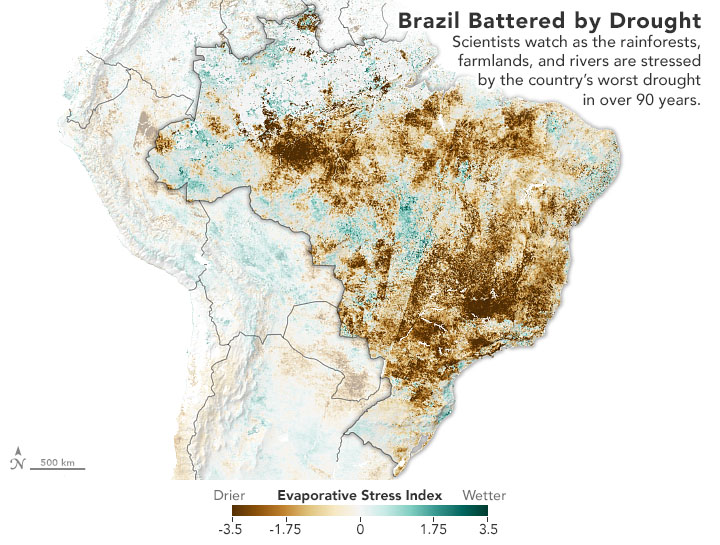 The drier-than-normal weather is also affecting the production of important Brazilian crops such as coffee, corn, sugarcane, and oranges. A Brazilian agricultural consulting agency forecasted that yields for the second corn crop could hit a five-year low. Coffee production in São Paulo state was forecasted to drop as much as 20 to 30 percent from normal levels.

The map above shows where vegetation is stressed due to lack of water. The Evaporative Stress Index (ESI) incorporates observations of land surface temperatures from NOAA satellites and observations of leaf area index from the Moderate Resolution Imaging Spectroradiometer (MODIS) on NASA’s Aqua and Terra satellites. ESI observations are a measure of evapotranspiration, or how much water is evaporating from the land surface and from the leaves of plants.

Based on variations in land surface temperatures, the ESI map indicates how the rate of evapotranspiration from May 7 to June 4 compared to normal conditions. Brown areas indicate plants that are stressed due to inadequate moisture, even if their leaves have not yet wilted or turned visibly brown. Much of the stressed vegetation is located in key agricultural states including Minas Gerais, Goiás, Mato Grosso do Sul, São Paulo, and Paraná.

Many areas of Brazil have seen below-average rainfall since at least October 2019, according to government authorities. The November to March rainy season in 2020/2021 brought exceptionally low rainfall in the states of São Paulo and Mato Grosso do Sul. Scientists suggest the sparse rainfall was linked to the recent La Niña, which typically brings drier weather in the southern part of the continent.