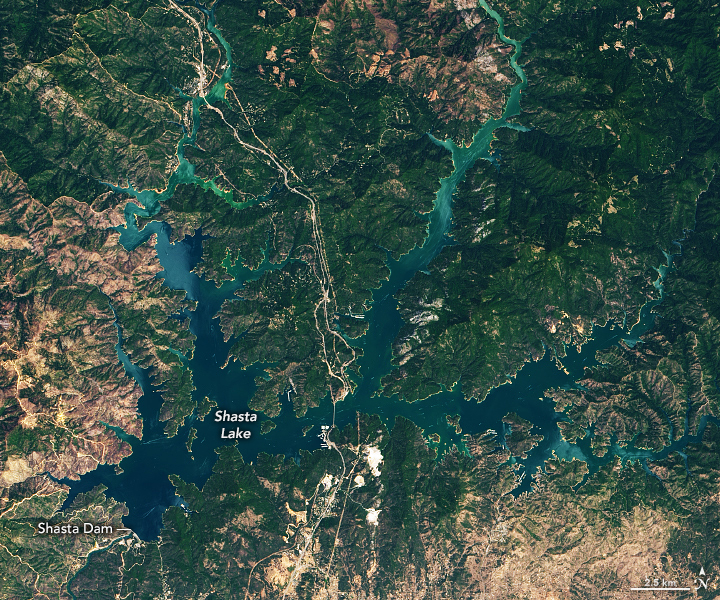 Just four years after emerging from a severe multi-year drought, California has descended into dry conditions not seen since 1976-77. Evidence of the new drought stands out in satellite images of the state’s two largest reservoirs.

The images above and below, acquired by the Operational Land Imager (OLI) on Landsat 8, show Shasta Lake and Lake Oroville this year and in June 2019 (more typical conditions). The tan fringes around the water in 2021 are areas of the lakebed that are underwater when the reservoirs are filled closer to capacity. The phenomenon is often referred to as a “bathtub ring.”

Managed by the US Bureau of Reclamation, Shasta Lake is the largest reservoir and third largest water body in California. Situated north of Redding, the reservoir feeds into the Sacramento River watershed and is a key water source for the rich agricultural lands of the Central Valley. As of June 16, 2021, Shasta Lake held 1.87 million acre feet (maf) of water, or about 41 percent of capacity and 49 percent of the historical average for this time of year. From the time of the 2019 Landsat image to this week, the lake level dropped 106 feet (32 meters) in elevation.

Lake Oroville, managed by the California Department of Water Resources, has seen a precipitous drop as well. From June 2019 to June 2021, the water level on the state’s second largest reservoir fell 190 feet (58 meters), from 895 to 705 feet above sea level. According to the Associated Press, the record low is 646 feet, set in September 1977. 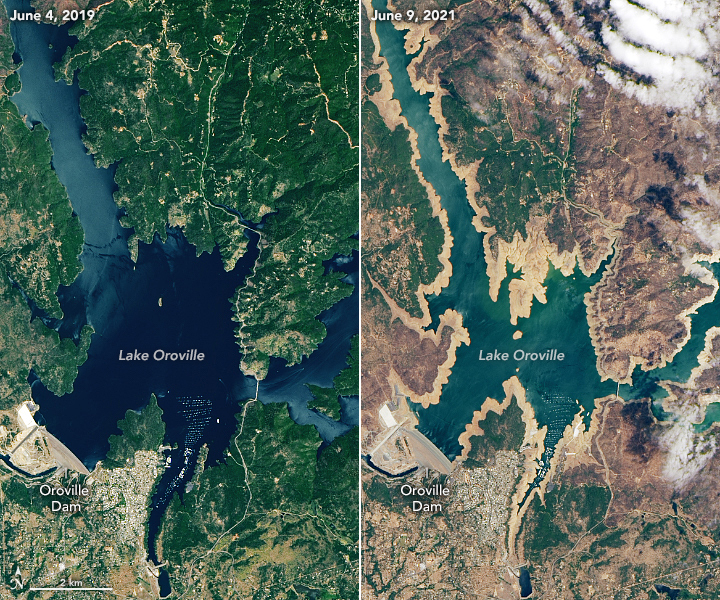 On June 16, Cal Water reported that Lake Oroville stood at 35 percent of capacity and 43 percent of average—just slightly better than the historically dry years of 1976-77. According to several news reports, eight out of ten boat launches around Oroville have been closed, and resource managers are concerned that the reservoir’s hydroelectric power plant might have to be idled if water levels drop much more.

Water storage in reservoirs is complicated and not entirely tied to recent conditions. State and federal resource managers adjust flows to provide water allotments to farmers and cities and to maintain habitat for native and sometimes endangered species. (For instance, salmon need cold water from the reservoirs to spawn.) In some parts of California, water is also managed to prevent saltwater intrusion into freshwater supplies.

Even with management for drought, the situation in many California reservoirs is growing serious as air temperatures have been unusually warm for months and precipitation has been between 35 to 50 percent of normal. In the Northern Sierra (Sacramento) water region, mean precipitation since October 1 has been 23.1 inches; the average (1966-2015) is 51.8 inches. It has so far been the driest year since the 1976-77 drought. (October 1 is the beginning of the “water year.”) The San Joaquin water region is now in the third driest stretch behind 1976-77 and 2014-15; the Tulare Basin has seen its least precipitation on record. These rain and snow deficits follow well-below average precipitation in 2019-20.

The reservoir deficits have been exacerbated by a lack of snowmelt running down from the Sierra Nevada range. Mountain snowfall was already below average this winter, and much of it melted quickly amid high spring temperatures. Large volumes of meltwater were also absorbed by soils still parched from last year. Altogether, water authorities estimate anywhere from 500,000 to 800,000 acre-feet of meltwater never made it out of the mountains. (One acre-foot can supply roughly two households with water for one year.)

“This extra dryness and the unusual warmth has made this second year of drought more like the third or fourth year of the previous drought (2012-2016). So California is having to react faster than usual,” said Jay Lund, co-director of the Center for Watershed Sciences at the University of California, Davis. “On the other hand, the recent 2012-2016 drought has more of the institutions and plumbing already tuned-up for managing drought . In some ways we are better prepared. But it is like a hurricane on the East Coast: you can be prepared, but it is still a hurricane, and there will be damage.”

The state government has issued drought proclamations for 41 of California’s 58 counties, and people in many communities are being asked to conserve water. Federal and state authorities have also reduced annual water allocations to farmers and cities in several areas. The cutbacks will likely remain in effect until winter rain and snow falls.