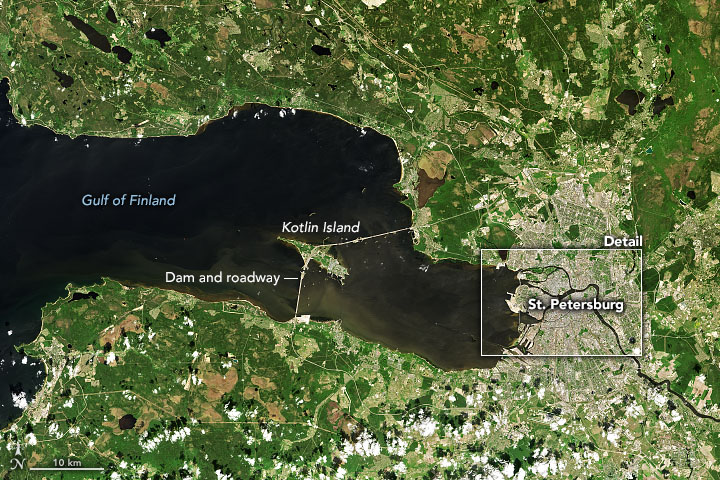 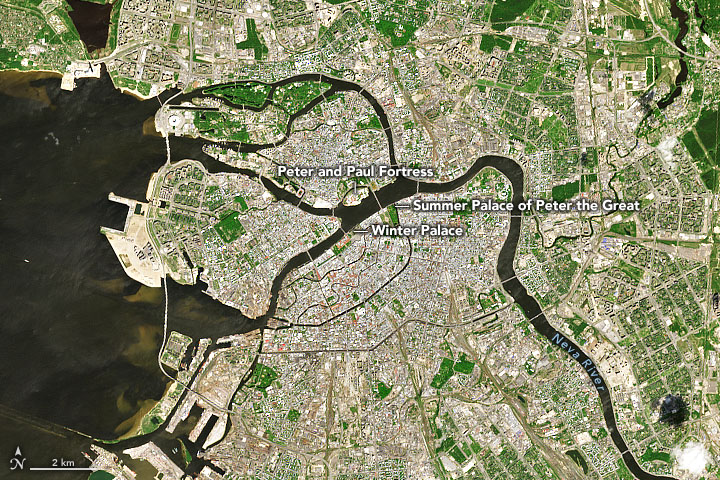 Floods have long plagued Saint Petersburg, Russia’s canal-filled “Venice of the North.” Spread across 42 marshy islands of the Neva River Delta, the historical core of the city rises just 1 to 2 meters (3 to 7 feet) above sea level.

In 1703, construction had barely begun on Saint Petersburg’s first building—the star-shaped Peter and Paul Fortress—when floodwaters washed away construction materials at the site. Since then, more than 300 floods have hit the city, including three catastrophic events where water levels rose more than 3 meters and swamped thousands of buildings.

The largest floods are typically triggered when cyclones in the Baltic Sea push water east into the Gulf of Finland and Neva Bay. The narrow, shallow gulf can set up powerful seiche waves that are especially dangerous if they coincide with high tides or seasonal floods on the Neva River.

Russia’s answer to this flood prone-geography is the Saint Petersburg Flood Prevention Facility—a colossal complex that includes 11 dams, 6 locks, 30 water purification stations, and 2 navigation channels. As seen in this image from the Operational Land Imager (OLI) on Landsat 8, the structure spans 25 kilometers (16 miles) across the Gulf of Finland, from Lomonosov northward to Kotlin Island, and then east toward Gorskaya. A six-lane highway runs across the structure’s wide top.

Work began on the project in 1979, but it was not until 2011 that officials declared it operational. The $3.85 billion structure is designed to withstand storm surges of 5 meters. Most of the time the floodgates are left open to allow water and marine life to pass. However, the flow can be cut within 45 minutes if a flood is imminent, as has been done more than a dozen times in the past decade. Vulnerable areas in the historic core of the city—which is a UNESCO World Heritage Site—have not experienced damaging flooding since the dam opened.