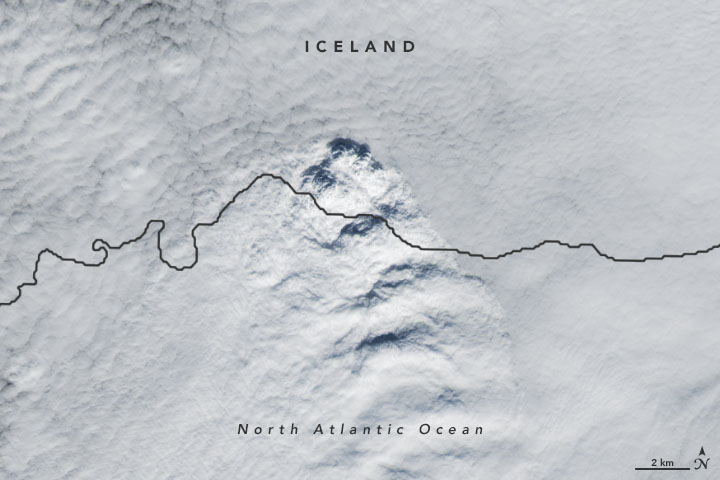 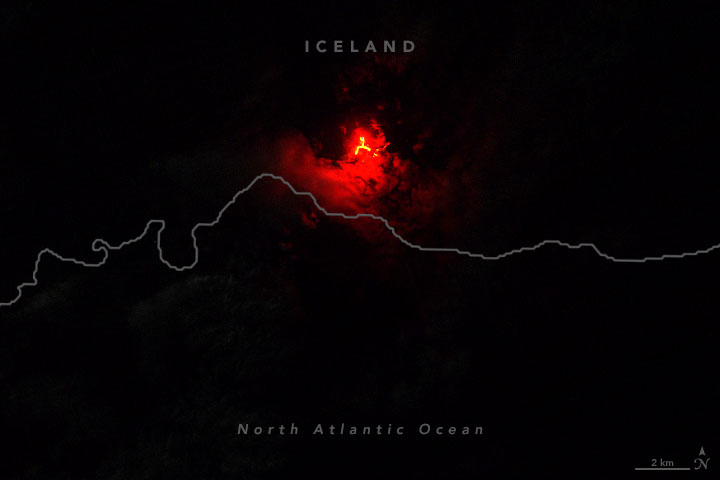 A Curious Case of Clouds in Iceland

When parallel rows of clouds lined up over southwestern Iceland on April 30, 2021, they appeared to be strikingly pretty, but relatively common, wave clouds. But this instance becomes more compelling when you consider what lies below the blanket of white.

Wave clouds are a visible component of waves in the atmosphere, which form for a variety of reasons. Sometimes they are caused by land topography, such as when an air mass is forced over an obstacle like a mountain ridge, an iceberg, an island, or a volcano. According to cloud researcher Bastiaan Van Diedenhoven of SRON Netherlands Institute for Space Research, this is a reasonable explanation for the cloud pattern visible on April 30. He pointed to similar patterns in images from 2020.

Some scientists think that the clouds might have been influenced by the eruption at Fagradalsfjall, a shield volcano on Iceland’s Reykjanes peninsula. If this is the case, the waves in the atmosphere were formed by the collision of different air masses, not by the topography.

“The difference in density between air heated by the volcano—even if not explosive—and the surrounding environment is very likely responsible for creating turbulence through Kelvin waves that propagate downwind,” said Jean-Paul Vernier, an atmospheric scientist with the NASA Applied Sciences Disasters program.

The natural-color image on the left—acquired by the Operational Land Imager (OLI) on Landsat 8—shows the clouds as they appeared around midday on April 30, 2021. Later that night, OLI acquired a false-color image of the same area (right), showing the infrared light emissions from the Fagradalsfjall eruption.

Though it is not erupting explosively, the volcanic system has spewed plenty of hot lava since the start of the eruption in late March 2021. Activity from one of the cones intensified in late April, with fountains of lava reaching hundreds of meters into the air.

Throstur Thorsteinsson, a scientist at the University of Iceland, also thinks the cloud waves were probably influenced by the eruption. He noted that in early May, the eruption displayed even greater activity and began to pulsate—starting and stopping in intervals of minutes. The plume from those fiery spasms produced its own unique pattern in the atmosphere.