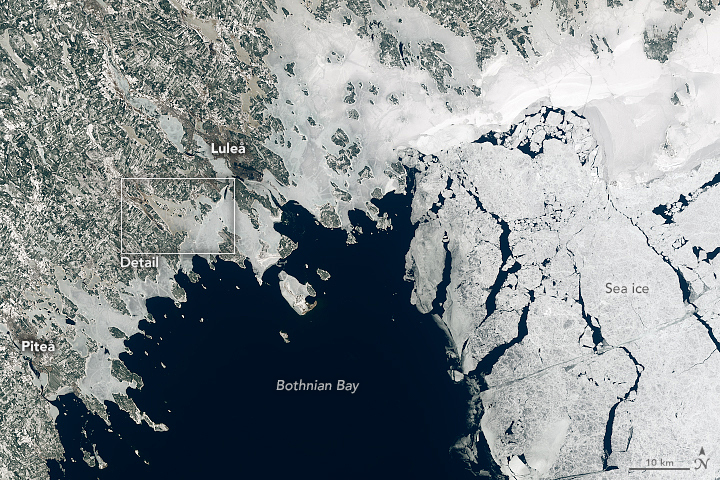 Bothnian Bay Before the Breakup

Unlike the sea ice that caps the Arctic Ocean—some of which can survive the summer—the ice on the northern Baltic Sea will completely melt away before summer starts. These images offer a late-season look at some icy features before they are wiped away by spring melting.

Acquired on April 19, 2021, by the Operational Land Imager (OLI) on Landsat 8, these natural-color images show the northwestern side of Bothnian Bay. Located in the northernmost part of the Baltic Sea, the bay is bounded by Sweden (west) and Finland (east of this image).

The wide view shows plenty of ice still clinging to the coast of Sweden. This “land-fast ice” is anchored to the shore and does not drift. Farther out in the bay, drift ice moves freely with the winds or currents. 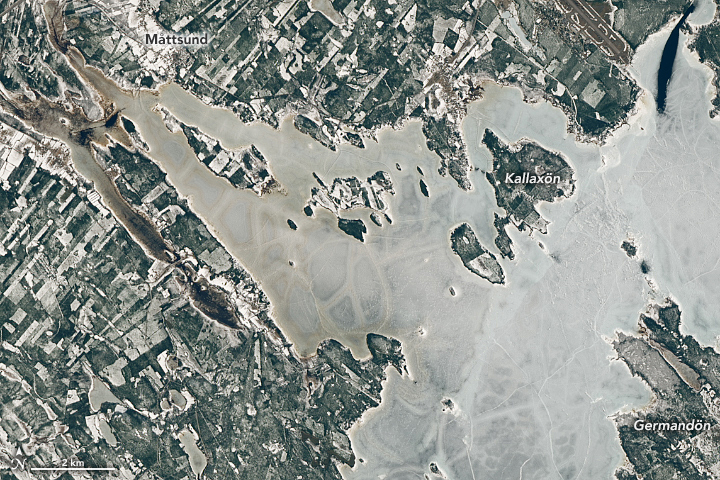 The detailed view shows a closer view of land-fast ice in the Luleå Municipality, along the coast of northern Sweden. Notice the ice’s rusty color in places, most notably near Måttsund: This is due to sediment-laden water that flooded the surface of the ice at some point. This can happen when the water level rises, but the ice—anchored to the land—cannot rise with it.

When this image was acquired on April 19, the fast ice was still mostly intact. By May 1, ice charts from the Finnish Meteorological Institute indicate that much of this fast ice was in an advanced state of disintegration, or “rotten.” This is typical for the bay’s fast ice, which usually starts to decline by mid-April and disappears completely by mid-May.

Though seasonal, the presence of ice in Bothnian Bay each year is hugely important for the region’s wildlife. Seals, for example, use the icy habitat for giving birth to their pups. People also find utility in the seasonal ice, using it to easily access the bay’s archipelagos. Thousands of islands are clustered off the shores of Sweden and Finland; some are populated, others have seasonal fishing villages, and many are uninhabited. Some of the linear features on the ice close to shore are likely tracks made by people during these offshore excursions.

Other patterns in the ice, especially those farther offshore, are caused by natural processes. The bright white spaghetti-like features on the ice just west of the island of Germandön (detailed image) are ridges—areas where ice floes have collided, causing broken pieces to pile up on the sea ice surface. Ridges can stand many meters high and become quite dense across the sea ice, making winter navigation for ships especially challenging and slow. Observations from a Finnish icebreaker from April 18-20 indicate that areas of sea ice east of this image were still heavily ridged.

In a new research paper accepted for publication in The Cryosphere, researchers described how they could use satellite data to enhance the safety of navigation in ice-covered waters. The research, led by Renée Mie Fredensborg Hansen of the Finnish Meteorological Institute, used high-resolution topographic measurements from NASA’s Ice, Cloud, and land Elevation Satellite 2 (ICESat-2) to estimate the degree of ridging in Bothnian Bay sea ice.

According to study co-author Sinead Farrell of the University of Maryland, the study makes a case for the rapid, near-real-time release of ICESat-2 data for similar uses in the Arctic and other ice-covered seas.