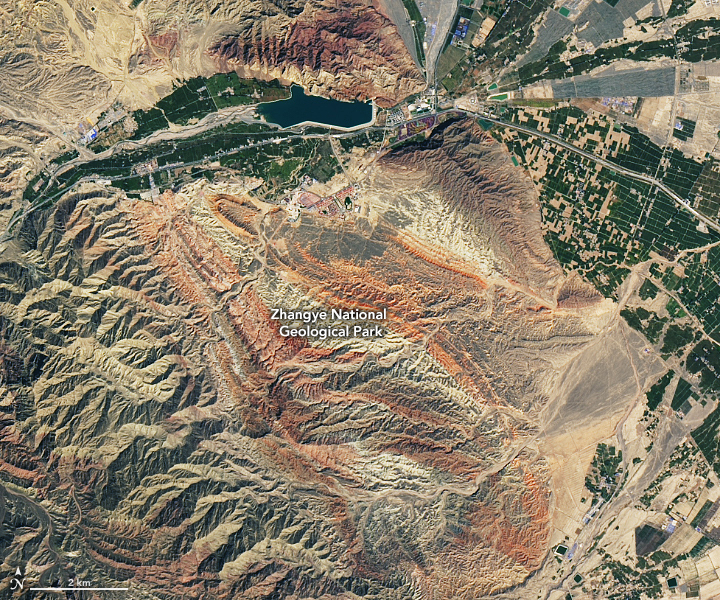 In northwestern China’s Gansu province, at the northernmost extent of the Tibetan Plateau, the landscape offers layer upon layer of spectacularly colorful rocks. The formations have a compelling geological history that dates back tens of millions of years and involves a continental collision more than 2,000 kilometers away.

The colorful landscape around the Qilian Mountains (Qilian Shan) is visible in these images, acquired on September 17, 2020, by the Operational Land Imager (OLI) on the Landsat 8 satellite. The reds and browns of exposed sandstones and other sedimentary rocks poke out from the range’s northern foothills, where the mountains meet a flat basin to the north known as the Hexi Corridor.

The first image shows Zhangye National Geological Park, which spans 322 square kilometers (124 square miles) of the prefecture of Zhangye. The widespread rusty color is sandstone, which was colored deep red during its formation by iron oxide. Other oxides imparted browns, yellows, and even greens to the various layers of rocks.

It is a geologic marvel that the park’s colorful layers—deposited tens of millions of years ago during the Cretaceous Period—are visible at all. Folding and faulting processes have since lifted and deformed the rock, exposing layers that would otherwise have remained out of sight. Much of this crumpling and disruption of the stratigraphy is thought to have resulted from the “recent” collision of the Indian and Eurasian plates about 50 million years ago during the Cenozoic Era. Recent research suggests, however, that some of the deformation is even older. 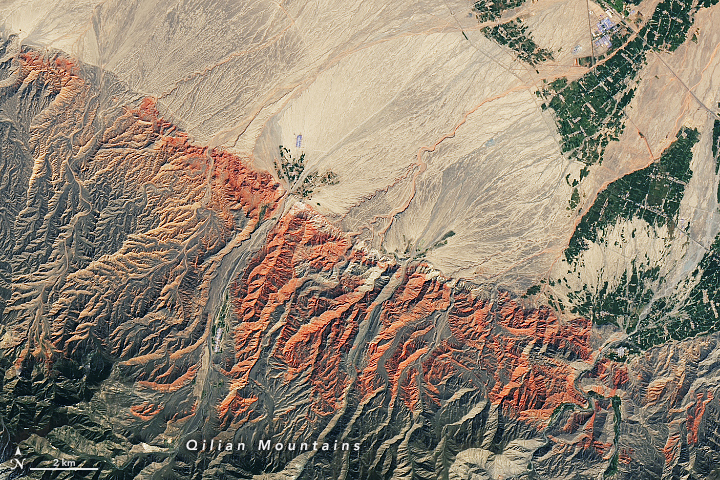 “The implications are that there was somewhat rugged, pre-existing topography prior to the India-Asia collision,” said Andrew Zuza, a scientist at the University of Nevada. “The Qinghai-Gansu province areas of the northern Tibetan Plateau may have already had some topography before development of the Tibetan Plateau.”

Erosion from wind and water have continued to shape the rock, sculpting natural pillars, towers, and ravines. In July 2020 the site was designated as a UNESCO Global Geopark due to its geological significance.

Colorful rocks are not confined within the park boundaries. The second image shows an area about 150 kilometers (100 miles) northwest of the geological park. Like the park’s rusty rocks, these sandstones are from the Cretaceous and appear strikingly red. But even just a hundred miles away, different geological and erosional processes have played out. “That region just doesn’t have the same tilted colorful beds and small-scale rugged topography that the park area has.”