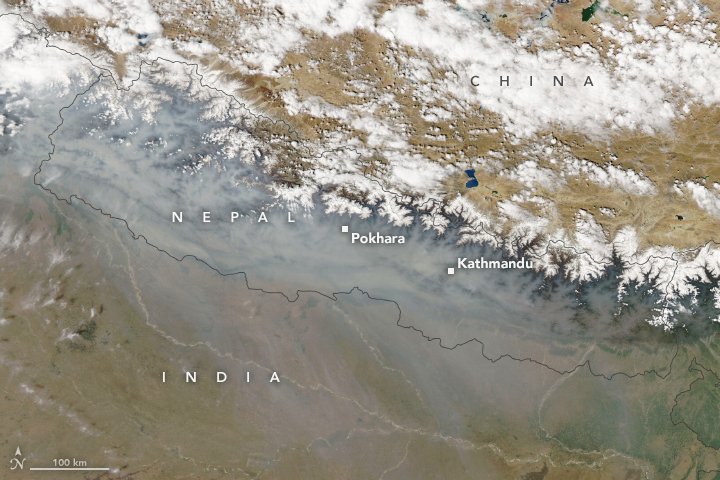 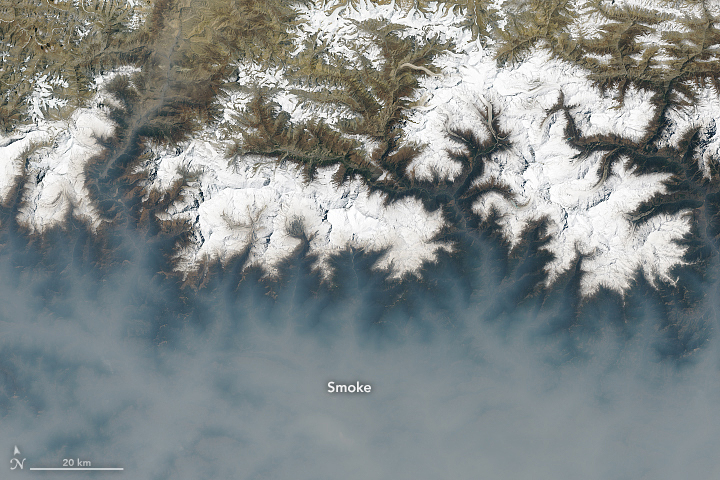 A Fierce Fire Season in Nepal

Seasonal fires, lit to manage farmland and pastures, are common in Nepal in March and April. In 2021, the fires grew particularly extreme, as many spread and burned uncontrolled through forests.

Months of unusually dry weather has parched vegetation and turned it into tinder. Nepal received just a quarter of the rain it normally sees between January and April. Stretches of hot, windy weather have also exacerbated some fires, some of which burned in rugged terrain that made them hard to extinguish.

Scientists have used several satellite sensors to track Nepal’s active 2021 fire season. The Moderate Resolution Imaging Spectroradiometer (MODIS) on NASA’s Aqua satellite acquired this natural-color image of smoke enveloping much of the mountainous country on April 5, 2021. The Operational Land Imager (OLI) on Landsat 8 offered a more detailed view of a smoke pall covering the foothills and valleys near Pokhara on the same day. Most of the blazes have occurred in lower-elevation areas in southern Nepal, while the Himalayas serve as a barrier that directs smoke east toward India and Bangladesh rather than north into China.

One way that scientists can gauge the intensity of fire seasons is by analyzing thermal anomalies, or hotspots observed by satellites. In this case, the Visible Infrared Imaging Radiometer Suite (VIIRS) on the NOAA-NASA Suomi NPP satellite detected roughly 41,000 hotspots in Nepal between January 1 and April 7, 2021—the second most the sensor has observed for that time period, according to NASA atmospheric scientist Pawan Gupta. The satellite sensor detected even more fire hotspots during the same period in 2016.

The MODIS on Aqua makes similar observations of thermal anomalies but with less detail for small fires. It also showed 2021 as having the second-most fire hotspots through April 7 in a record that dates back to 2002.

The smoke in the lower atmosphere has frequently elevated air pollution to unhealthy and occasionally hazardous levels in March and April 2021, according to data from a U.S. air quality sensor in Kathmandu. The fires and poor air have forced school closures, prompted evacuations, caused multiple deaths, and led to flight cancellations, according to news reports.

“Every year during the fire season, air pollution levels across Nepal remain very high for many days and affect the region’s economy and people’s health,” said Gupta. “Due to limited ground-based monitoring of air quality in the area, the health impacts are challenging to assess, but satellite data can fill in some of the gaps.”