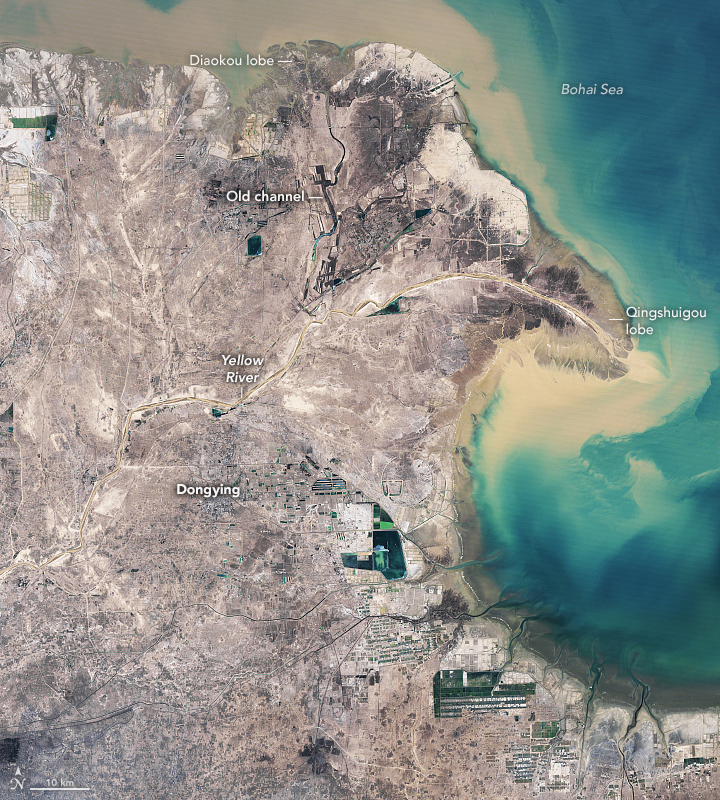 Building Up the Yellow River Delta

According to ancient Chinese myth, the source of the Huang He (Yellow River) extends all the way to the Milky Way, which itself was thought to be a celestial river connecting Earth and heaven. Modern day geographers tell a different story: the river starts as snow and ice on the Bayan Har Mountains in Qinghai province.

The river’s name comes from the abundant yellow-tinted silt the water picks up and transports eastward as it winds through the dusty, friable landscapes of the Loess Plateau in northwest China. By the time the river reaches flat coastal plains in the east and pours into the Bohai Sea, it has spanned nearly 5500 kilometers (3,400 miles), making it the sixth-longest river system in the world.

The Yellow River Delta is an unusually dynamic place. As the river flows into the delta, large amounts of sediment drop to the shallow bottom, building up new land if there is sufficient material to overcome the erosive forces of waves and tides. The river historically carried sediment loads that exceeded 1.6 billion tons per year, earning it a reputation as one of the muddiest rivers in the world.

All the sediment means that few other rivers have a history of silting up, bursting through banks, and changing course as frequently. Indeed, the tail of the Yellow River thrashes naturally about over time, its lower reaches shifting back and forth over huge distances. The mouth of the river has shifted—or avulsed—at least a dozen times since 1855, often triggering destructive floods. In 1855, a particularly large avulsion sent the channel sweeping hundreds of miles to the north to its current location near the Shandong Peninsula.

The last two major changes in course were engineered by people, primarily to control flooding and protect coastal development. In 1976, authorities shifted the river’s course away from the Diaokou lobe in the northern part of the delta toward another channel to the east, a move that made it easier to develop coastal gas and oil reserves. After the 1976 diversion, sediment rapidly built new land to the east in the Qingshuigou lobe, even as the ocean eroded the soft, unstable lands around the old river channel in the north.

The pair of Landsat images above illustrates how much the delta has changed. The first image shows the delta in 1989; the last shows the same area in 2020. In 1996, engineers diverted the river to cut off the Qingshuigou channel and steer water northwest, shifting where the delta was losing and gaining land once again. (To see the changes in the Qingshuigou lobe in more detail, read our World of Change: Yellow River Delta story). 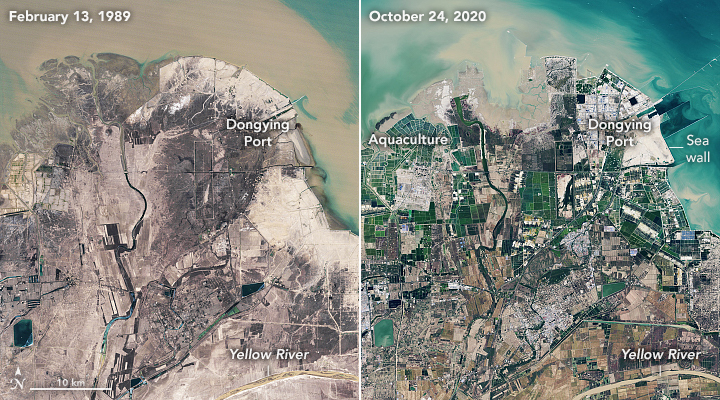 The shoreline around the abandoned northern channel (above) has retreated significantly due to the reduction of water and sediment. In contrast, areas where the shoreline has stabilized (such as Dongying port) are protected by seawalls. Meanwhile, gas and oil infrastructure, aquaculture ponds, salt evaporation ponds, and wind turbines have proliferated around the abandoned channel. Aquaculture pools tend to be larger than salt evaporation ponds and usually have green water. Salt evaporation facilities typically have small pools that vary in color depending on the salinity and microbe content of the water.

Some parts of the delta face pressure from rising waters. Since salt production and aquaculture can involve pumping of salty brine or freshwater stored under the surface, areas of rapid subsidence have emerged near some facilities. Satellite-based surveys of the Yellow River delta have measured sinking at hundreds of millimeters per year around certain pumps. Meanwhile, the natural settling and compaction of the soil contributes up to 10-20 millimeters of subsidence per year in many parts of the delta. Layered on these changes is global warming and sea level rise, which is now about 4 millimeters per year.

Urban and residential development has also spread rapidly. The population of Dongying, the largest city on the delta, has swollen from 378,000 people in 1989 to 1.3 million in 2021. As the entire delta has become more developed and the salinity level of soils have changed, farmers have shifted crops to new areas and let some fields go fallow, likely contributing to some of the land cover changes seen in these images. Note that some of the apparent greening in these images is likely due to seasonality. The 1989 image was acquired near the peak of winter in February; the 2020 image was taken in late-October, when vegetation on some types of deciduous plants probably had not completely died back yet due to cold weather.

While all of this change has been going on, there has been a sharp decrease in the amount of sediment carried by the river to the delta. By some estimates, the Yellow River brings only a tenth of the sediment in 2021 that it did during the 1960s and about half of what it did in the 1980s. Several dams, erosion-control projects, and reforestation projects upstream now trap much of the water and sediment that would otherwise reach the delta naturally, limiting the rate of new land creation.