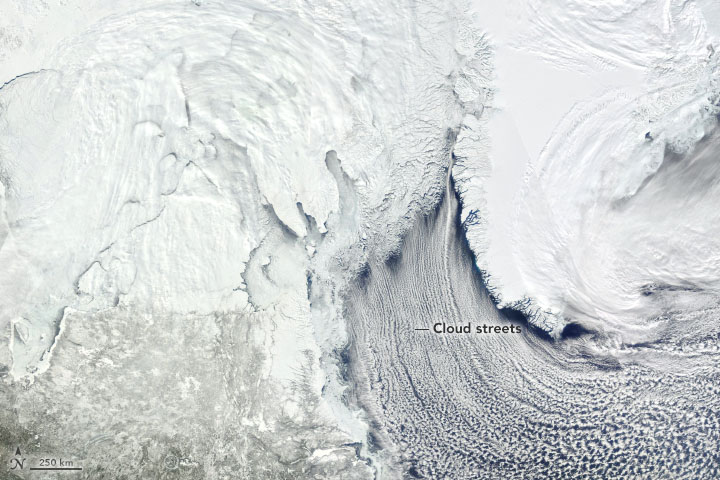 Season of Change in the Labrador Sea

Spring begets dramatic seasonal change across Earth’s far northern latitudes, including the melting and breakup of sea ice. Stirred around by wind, waves, and currents, the ice can paint some spectacular patterns on the surface of northern seas. The Labrador Sea region often displays a beautiful palette of textures as the atmosphere interacts with the ice and water.

On March 27, 2021, the Moderate Resolution Imaging Spectroradiometer (MODIS) on NASA’s Aqua satellite acquired this natural-color image of ice on the Labrador Sea. Situated between Greenland and Canada’s Labrador Peninsula, the sea is part of the North Atlantic Ocean and connects to the Arctic Ocean via various straits and bays to the north.

In the image, ice of various shapes and thicknesses hugs the Labrador Peninsula’s coast. Areas of thicker, consolidated ice still cling to the coast in places. Farther north, a mixture of broken floes are floating amid areas of unfrozen water off Canada’s Nunavut province. Toward the ice edge farthest from the coast, ocean currents sculpt the ice into cyclone-shaped vortices.

But not all that is white is ice. The long, parallel bands of white aligned along the Davis Strait are cloud streets. This type of cumulus cloud is common during the spring, when cold air blows over comparatively warmer water. The condensed water vapor can travel for hundreds of kilometers, and in this case sweeps all the way around the southern tip of Greenland. 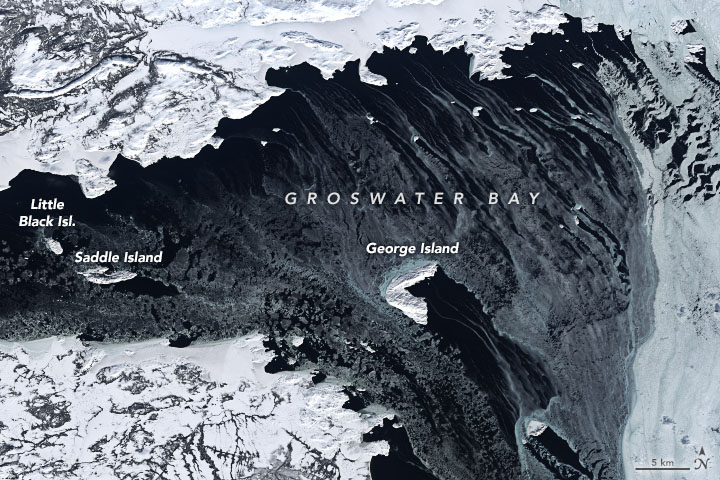 Some of the area’s thinnest ice that day was in Labrador’s Groswater Bay. The Operational Land Imager (OLI) on Landsat 8 acquired this detailed view of the bay on March 27. Wind and water push the thin ice (nilas) around the islands, creating a ‘shadow’ of open water behind them.

According to the National Snow and Ice Data Center, the extent of sea ice in the Labrador Sea has been below average in recent months. News reports point to some of the challenges the thin ice has posed for Inuit people living in the region, including the disruption of ice highways that connect communities and provide access to hunting and wood collecting areas.