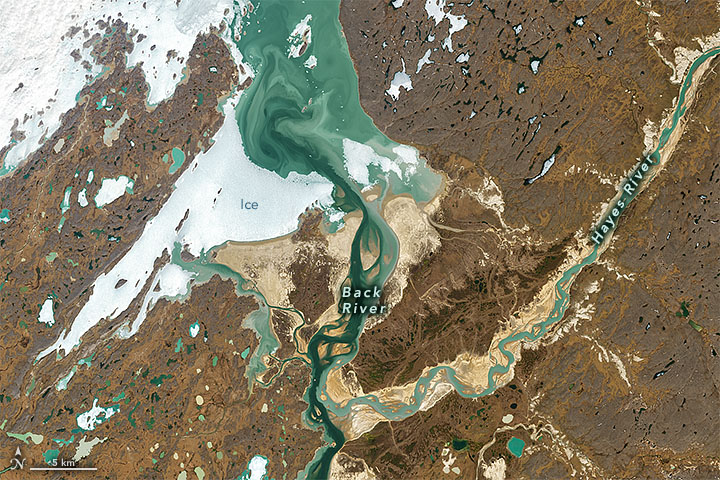 A Colorful Confluence in the Canadian Arctic

Where two rivers meet without mixing much, the colorful contrast can be striking. The confluence of the Back and Hayes rivers in Nunavut, Canada, is such a place.

The colorful confluence and surrounding landscape in the eastern Canadian Arctic are visible in this image acquired on June 30, 2014, with the Operational Land Imager (OLI) on Landsat 8. The relatively dark blue-green water of the Back River contrasts sharply with the light turquoise of the Hayes.

The Back River approaches the confluence from the southwest, flowing for nearly 1,000 kilometers (600 miles) from near the Great Slave Lake to its outlet at Chantrey Inlet. It traverses the so-called Barren Grounds—a mostly flat, treeless plain covered with grasses, mosses, lichen, and the occasional granite outcrop. Studies of the Back River corridor have noted that the river is typically clear, with sediment and occasionally algae on the bottom.

The Hayes River approaches from the opposite direction, flowing for more than 300 kilometers (200 miles) from an unnamed lake to its junction with the Back River. Research has shown that the Hayes River valley contains an abundance of marine silts and clays, which have been eroded to form a badlands-like landscape. The river water appears turbid—possibly rich with sediment that would give it a milky color. 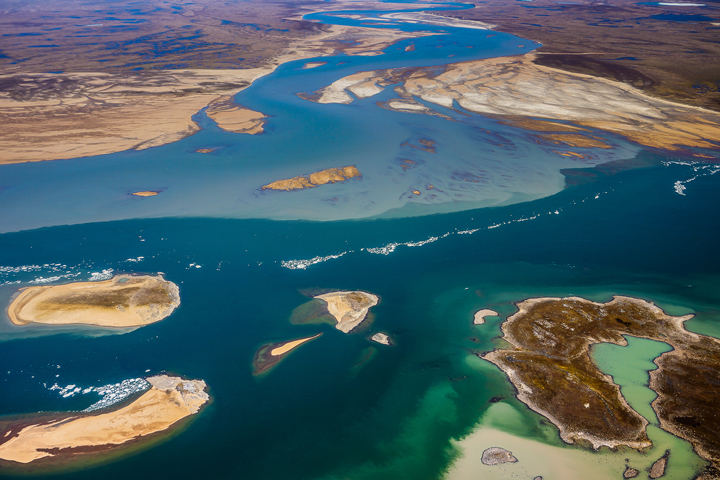 The photograph above shows a detailed view of the confluence. Robie Macdonald, a scientist at the University of Manitoba and the Canadian Department of Fisheries and Oceans, snapped the photo from an airplane in late June 2014 while doing fieldwork in the region. The purpose of the fieldwork, led by Matt Alkire of the University of Washington, was to investigate the geochemistry of small rivers across the Canadian Arctic.

Notice the distinct boundary between the two water sources that continues north beyond the confluence for about 15 kilometers (10 miles). A satellite image alone cannot tell us why the streams stay distinct, but stark boundaries like this tend to occur when there are differences in the water’s temperature, density, and rate of flow. You can see similar examples around the planet, including the famous confluence of the Rio Negro and Rio Solimões in Brazil. The waters finally start to mix where the Back River enters Chantrey Inlet—a waterway of the Canadian Archipelago near the Northwest Passage sea route.

Royal Navy officer George Back, for whom the river is named, reached Chantrey Inlet after exploring the length of the river in the 1830s. A decade later, the Franklin Expedition set out to explore unnavigated sections of the Northwest Passage’s icy waters; the ships from that ill-fated expedition were recently discovered in Victoria Strait, not far from the Back River Estuary.

Check out this story and blog post to see more images shot by Macdonald during fieldwork more than 1,000 kilometers away in the western Canadian Arctic.