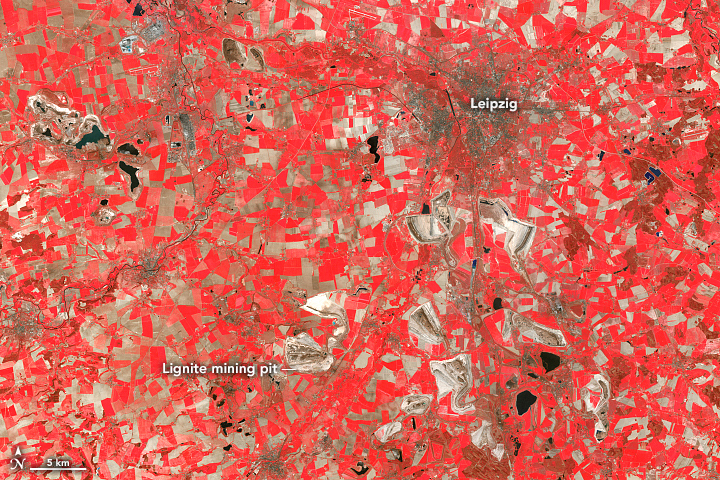 From Mine District to Lake District

In the 1980s, a satellite flying over central Germany would have observed many large open-pit mines extracting lignite, or brown coal, for power generation. But today, many of those pits are unrecognizable as they have been reclaimed to serve starkly different purposes.

Lignite mining started about 150 years ago in central Germany, and the country became a top producer globally. In the 19th century, the surface mines were small and extractions were made by hand. As technology improved, the mines grew larger. While the coal helped provide necessary electricity, the mines took a toll on the surrounding environment. Lignite mining operations transformed about 1,770 square kilometers (680 square miles) of German countryside, disrupting land and water environments, causing people to move, and increasing greenhouse gases emissions.

Around the 1990s, some lignite mines in central Germany began closing due to changes in policies, public concern, and the rise of other energy sources. Miners, local governments, nature conservationists, and water management experts then worked together to fill the mines with water to create recreation spots for people, habitats for aquatic animals and amphibians, water sources for wildlife, flood management, and more. The water to fill the lakes often came from nearby rivers, groundwater rebound, or water from dewatering operations from other still active mines. In all, at least 140 lignite mines have been flooded to create artificial “pit lakes” across Central Germany.

The false-color images above show changes near the city of Leipzig across three decades. The image on the left, taken on April 29, 1987, was acquired by the Thematic Mapper (TM) on Landsat 5 (bands 4-3-2). The image on the right, taken on April 23, 2020, was acquired by the Operational Land Imager (OLI) on Landsat 8 (bands 5-4-3). The scenes include a combination of green, red, and near-infrared light, which helps distinguish different components of the landscape. Vegetation is red, while urban areas are tan to gray. A natural-color image of the same area is shown below. 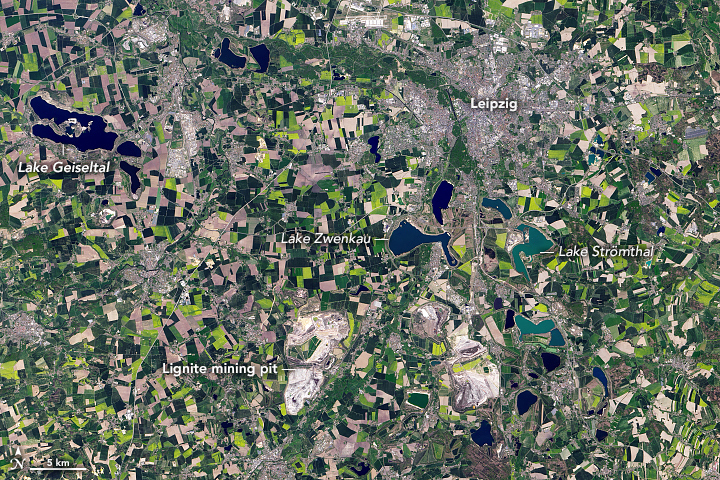 Formerly an opencast mine that closed in 1993, Lake Geiseltal is currently the largest artificial lake in Germany and spans around 18 square kilometers (7 square miles). The slopes of the lake have also been uniquely reclaimed for a vineyard. Lake Geiseltal helps reflect sunlight to the grapevines and the moisture in the air around the lake helps protect them from frost in the winter.

One of the most popular pit lakes for vacationers is located south of Leipzig in an area called Neuseenland (roughly meaning "New Lakeland" in German), which includes at least four lignite pit lakes in operation. Land managers for Neuseenland plan to flood around 20 mines in upcoming decades. Many of the lakes will connect to one another and nearby rivers, creating a network of waterways stretching over 200 kilometers (120 miles).

Lake Zwenkau was the site of an operational mine until 1999; now it is the largest pit lake in Neuseenland at 10 square kilometers (4 square miles). Visitors can also swim or paddle at Lake Stromthal, the site of a 15-meter (50-foot) high floating art exhibit called VINETA, which pays tribute to a church of the town of Magdeborn that made way for lignite mining.