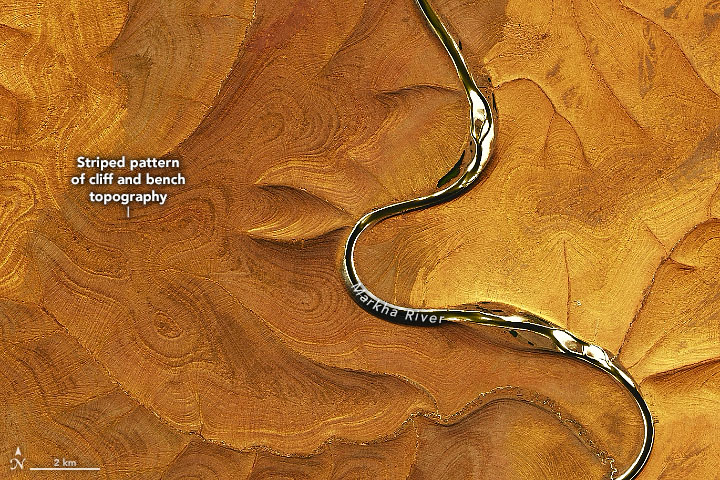 From Russia with Questions

Today’s image is the answer to our February 2021 puzzler.

Earth science satellites are generally used to observe certain features of the planet—landforms, atmospheric chemistry, ocean patterns. But at the same time, they periodically show us things that few people have seen or even looked for.

In February 2020, our team noticed a twitter message with a peculiar and beautiful image from Russia near 66 degrees north latitude. It turned into a scientific detective story and an unresolved case.

In the images above and below, acquired by the Operational Land Imager (OLI) on Landsat 8, stripe patterns twist and turn around the hills of the northern Central Siberian Plateau. On steeper hills, the stripes form tight loops that spiral from the top of the hill to the bottom. As they descend toward the riverbanks, they start to fade. Eventually, the stripes disappear at lower elevations and at latitudes.

There are several possible causes for the distinctive striping pattern, and the answers vary by the season and by the expertise of the researcher. 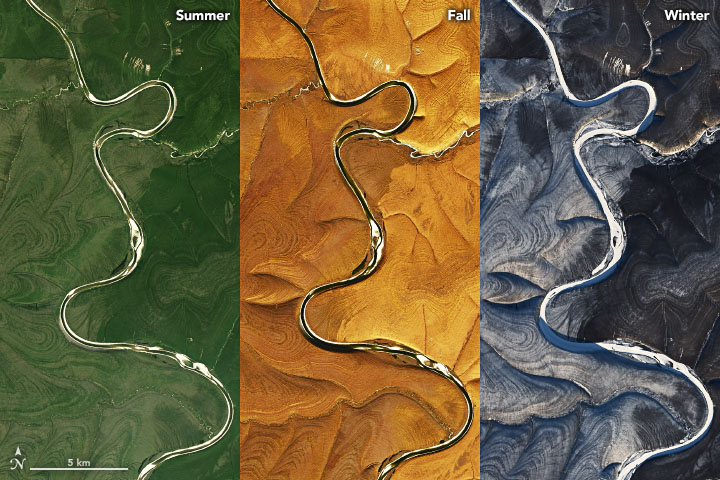 This portion of the Central Siberian Plateau lies within the Arctic Circle, where air temperatures remain below freezing for most of the year. Much of the landscape is covered in permafrost that can stretch tens to hundreds of meters below the surface. There are different levels of intensity, but this area generally has permafrost coverage for 90 percent of the year.

The land does occasionally thaw, and cycles of freezing and thawing are known to create polygon, circle, and stripe patterns on the surface (referred to as “patterned ground”). In the case of the images above, the stripes could be elongated circles stretched out on the slopes by such thawing cycles. Yet studies have shown that this type of striping usually occurs at a much smaller scale and tends to be oriented downslope.

To geomorphologists, the nature of the soil offers another explanation for the stripes. In regions this cold, soils can turn into Gelisols—soils with permafrost in their top two meters and often with darker and lighter layers distinguished by more organic matter or more mineral and sediment content. As the ground freezes and thaws, the layers break up and mix vertically in a process called cryoturbation. The persistent freezing and thawing action through the seasons can cause layers to align in a striping pattern. Different tundra vegetation—lichens, low shrubs, and moss—might grow preferentially on these Gelisol layers, accentuating the stripes we see from above. But this hypothesis has not been proven at large scales.

From a geologist’s perspective, the different stripes appear similar to sedimentary rock layers. Thomas Crafford of the U.S. Geological Survey called the pattern “layer cake geology,” where sedimentary rock layers have been exposed and dissected by erosion. As snowmelt or rain travels downhill, pieces of sedimentary rock are chipped away and sent down to the ravines below. Such erosion could cause a step-like pattern that appears as stripes from space similar to a slice of layer cake. This pattern is also referred to as “cliff and bench topography.” 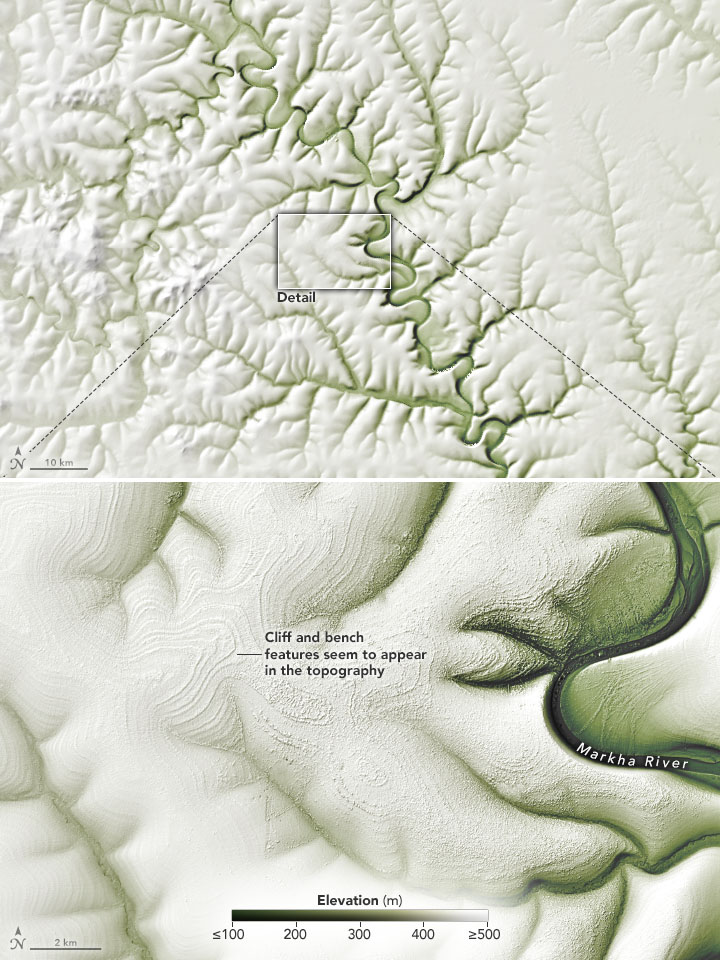 In the winter Landsat image at the top of the page, snow causes the striping pattern to stand out more than in other seasons. The benches would be the lighter stripes (covered in snow) and the cliffs would be darker stripes. The Arctic digital elevation map above, based on data from the ArcticDEM Project, gives a clearer perspective on the possible cliff and bench features.

“It looks like small canyons, maybe like the Badlands of South Dakota. The horizontal striping appears to be different layers of sedimentary rock,” said Walt Meier, an ice specialist at the U.S. National Snow and Ice Data Center. “The shape of the erosion pattern looks a bit different than standard sedimentary erosion, but my guess is that is due to the permafrost. The rivers are eroding through frozen ground. There could also be some effect from frost heaves affecting the topography.”

Several rivers cut across the plateau, including the Markha, and as the stripe pattern moves closer to the river, it starts to fade. This could be a result of sediment buildup along the riverbanks from millions of years of erosion.

Louise Farquharson, an Arctic geologist at the University of Alaska-Fairbanks, pointed to a region in northern Alaska with a very similar stripe pattern that could be formed by a similar process.