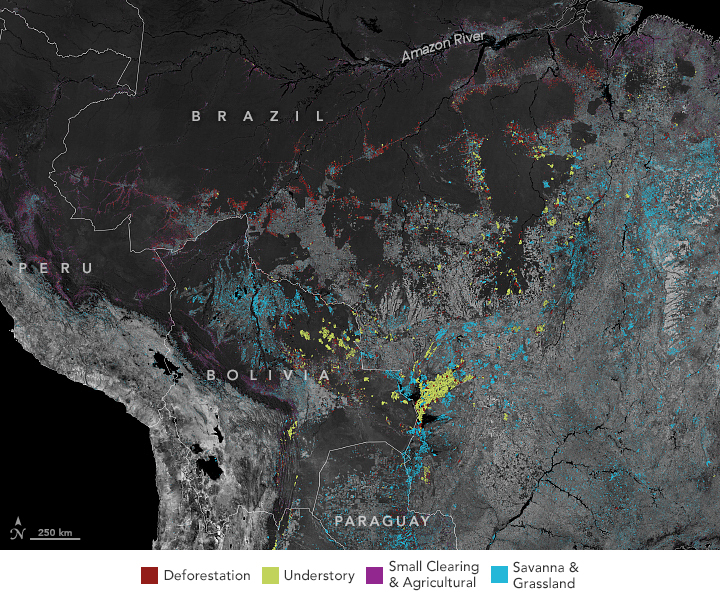 Fires Raged in the Amazon Again in 2020

After intense fires in the Amazon captured global attention in 2019, fires again raged throughout the region in 2020. According to an analysis of satellite data from NASA’s Amazon dashboard, the 2020 fire season was actually more severe by some key measures.

The Visible Infrared Imaging Radiometer Suite (VIIRS) sensors on the Suomi NPP and NOAA-20 satellites can detect thermal anomalies, or hot spots, caused by fires. In 2020, both VIIRS sensors combined detected about 1.4 million anomalies in the southern Amazon, compared to 1.1 million in 2019.

“Fire activity was up significantly in 2020. All types of fires contributed to the increase, including deforestation fires and understory fires, the most environmentally destructive types,” said Douglas Morton, chief of the Biospheric Sciences Laboratory at NASA’s Goddard Space Flight Center. “In the southern Brazilian Amazon, deforestation fire activity increased by 23 percent from 2019 to 2020, and active fire detections from understory fires were 60 percent higher than in 2019.”

Morton and colleagues have developed a new tool that groups and sorts fires into four types: deforestation (red in the map at the top of the page), understory forest fire (green), savanna-grassland (blue), and small clearing-agricultural (purple). Download a full-resolution view of the map here. The tool uses characteristics like the duration, intensity, and movement of fire anomalies to group and identify individual fire events. A single fire event can include dozens or even hundreds of connected thermal anomalies spread out over days or weeks. 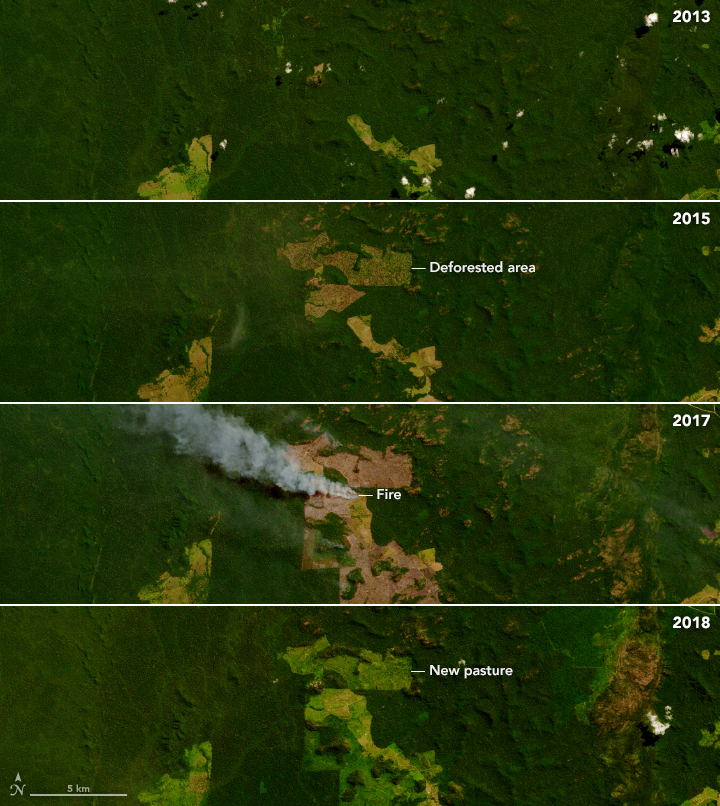 As shown in the series of images above, deforestation fires are part of a multi-step process that converts tropical rainforests for ranching and farming. It begins months and often years beforehand, when patches of forest are razed by bulldozers and tractors. The wood is then pushed into piles, left to dry, and then torched during the dry season. Multiple fires are needed to completely clear the land for agriculture.

In 2020, deforestation fires were concentrated in rural areas in Brazil along transportation corridors in the rainforest, primarily in the states of Pará, Amazonas, and Rondônia. Deforestation fires also burned in other Amazon countries, but on a smaller scale. In the map above, dark gray depicts the location of forests. Light gray areas lack forests—either because of deforestation or because savanna or grassland vegetation grows naturally there.

Small-clearing fires are typically set within forests by subsistence farmers within forests. They were widespread along rivers in several South American countries, but the environmental impacts are modest. Understory fires occur when other fire types escape and burn through leaf litter and woody debris on the floor of rainforests. Savanna fires burned widely in areas with thinner, shrubbier woodlands and grasslands, such as the cerrado of eastern Brazil and the Moxos plains of northern Bolivia. While savanna vegetation grows back quickly after fires, deforestation and understory forest fires cause damage that can persist for decades. 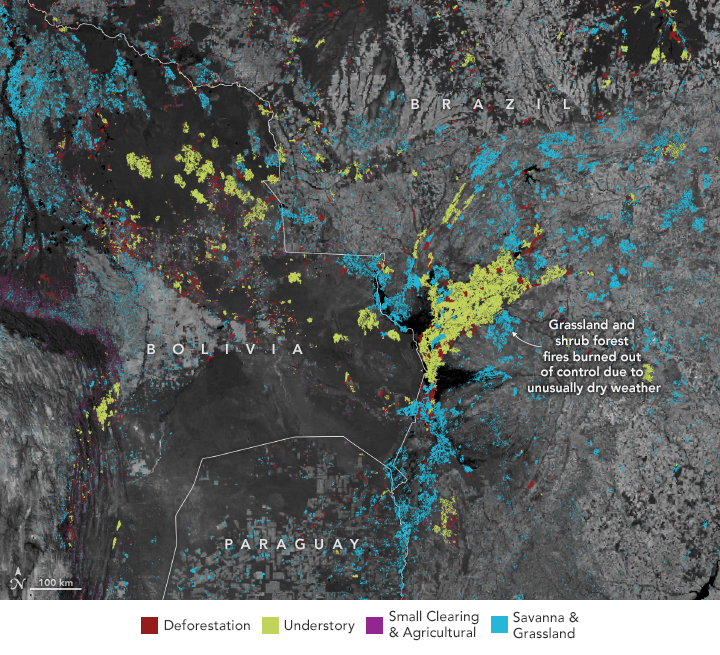 For much of 2020, warm ocean temperatures in the tropical Atlantic (and a record hurricane season) shifted rainfall away from South America, producing warm and dry conditions in the dry forests and savannas of the southeastern Amazon. “As a result, the scale of the fires in this area was extraordinary and devastating,” said Morton. “We tracked nearly 600,000 individual fire events in the southern Amazon and surrounding biomes, including 25 fires that were larger than 500 square kilometers (190 square miles) in Bolivia, Brazil, and Paraguay, putting them on par with the size of the largest fires in California in 2020.”

Many of the largest fires occurred in the Pantanal—a floodplain along the border of Brazil, Paraguay, and Bolivia where grasslands become susceptible to fire during the dry season. Fires also raged through dry forests in the neighboring Gran Chaco region. According to data from NASA’s Amazon dashboard, fires charred 43,000 square kilometers (17,000 square miles) of the Pantanal region in 2020—about 28 percent of the Pantanal. In the map above, fires in the region were classified as either understory forest or savanna fires based on the density of tree cover.

In the Brazilian state of Pará, where deforestation fires were more common, indigenous territories and other protected areas had notably different levels of fire activity. Baú and Menkragnoti lands are patrolled by indigenous groups that actively resist land development from outsiders. As seen in the map below, they saw few fires. In contrast, Apyterewa territory had large numbers of fires, including many deforestation around its southern border. Limited enforcement of land-use rules and the proximity to São Felix de Xingu, a cattle town with more than 2 million animals, have made Apyterewa lands appealing to grilheiros, or “land grabbers,” explained University of Toronto researcher Gabriel de Oliveira. 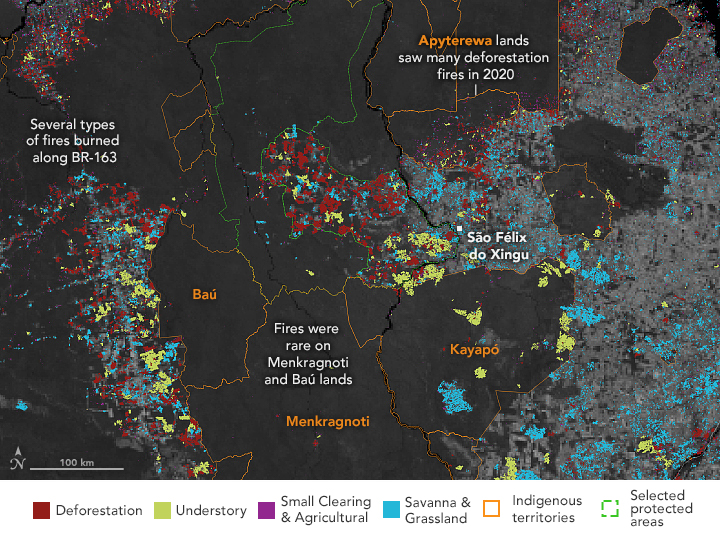 Emissions from fires on Apyterewa lands have been rising rapidly since 2017, according to one analysis by de Oliveira and colleagues. “We know this increase is not related to how indigenous people use fire,” he said. “The Parakanã in that territory—only about 700 people—have used small-scale fires to manage the land for decades. The huge increases in fire emissions only came after exponential increases in deforestation and commercial livestock expansion by outsiders.”

Some organizations working in the region hope that infusions of new satellite data and analyses could change the dynamic. For instance, SERVIR-Amazonia, a USAID/NASA initiative, is currently working with the Alliance of Bioversity International and the International Center for Tropical Agriculture (CIAT) to develop a data portal for users in Pará and hosted by the state’s Secretariat of Environment and Sustainability. “Our goal is to customize the NASA Amazon dashboard to make the data as useful as possible for local decision makers who are trying to combat fires and deforestation,” said Jose Leandro R. Fernandes, an engagement lead with SERVIR-Amazonia. 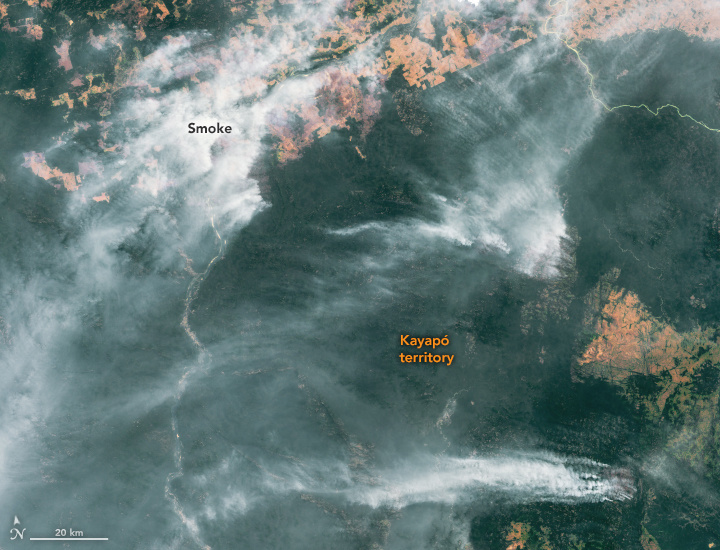 The impacts of NGOs and other organizations working at the local level can be considerable. “You can clearly see the impact of philanthropy in the 2020 fire data,” said Barbara Zimmerman, director of the The Kayapó Project for the International Conservation Fund of Canada. “Forest remains intact throughout most of Kayapó territory that receives outside conservation and development support. But over one million hectares of Kayapó territory along the mid to southeastern border—areas not allied with environmental groups—is undergoing rampant illegal invasion by gold mining and logging.”

In the map and Landsat image above, note that the largest fires in Kayapó territory burned in natural grassy savanna. Even the large fires classified as understory forest fires in this territory occurred in woodland savannas—areas with scattered trees growing amidst more fire-prone grasslands. Kayapó people use fire in these areas for hunting, small-scale clearing, and for horticulture plots. Some fires may have been started for these purposes, but then spread, de Oliveira noted. The forests in the eastern part of Kayapó territory are more prone to burning because logging and mining has opened up and dried out the canopy, making it more flammable, Zimmerman said.

The Amazon dashboard team at NASA hopes that by making data publicly available in near-real time, government agencies, NGOs, firefighting and law enforcement organizations, and academic researchers will be able to use it to respond more effectively to fires. “Our system identified about 23,000 individual deforestation fire events in 2020, but realistically fire brigades can only respond to about 1 percent of them,” said Morton. “With day-to-day tracking from tools like this, we think it will be easier for organizations to make the hard choices about which fires they will spend resources on to try to stop.”