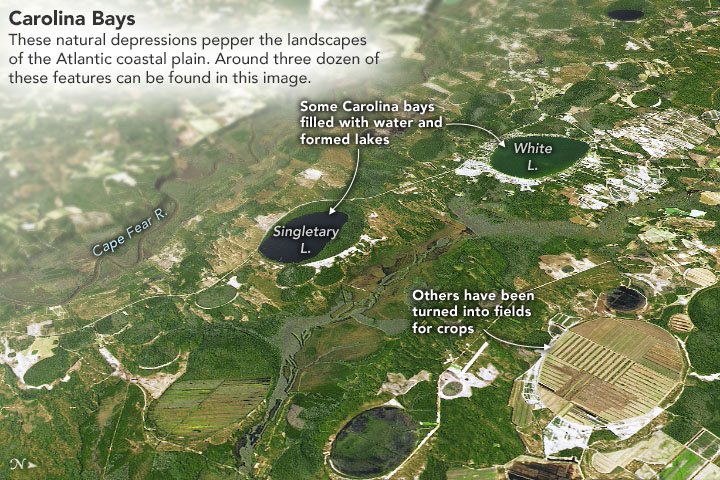 During the last ice age, the Atlantic coastal plain of the southeastern U.S. was a cold, dry, and windy place. With patches of permafrost stretching as far south as Georgia, the seasonal freezing and thawing of sandy soils left landscapes littered with thermokarst lakes and scattered sand dunes and ridges—much like those now found in parts of Alaska and the Arctic.

If you know where to look in the Carolinas, Georgia, Virginia, Maryland, and Delaware, you can still find abundant relicts from this cooler period. At ground level, clusters of low-relief oval depressions called Carolina bays can look as ordinary as a lake, bog, or farm field. Yet from above—from an airplane or satellite—the distinctive features stand out.

The image at the top of the page shows a collection of Carolina bays near Bladen Lakes State Forest in North Carolina. The natural-color image was acquired by the Operational Land Imager (OLI) on Landsat 8; the data were then draped over a digital elevation model to emphasize the terrain. The second image—based on lidar observations taken from aircraft—offers a more detailed view of the elevation. The lowest areas are shown in purple and blue; higher areas are green and yellow. The third image shows a broader view of the lidar data, highlighting another group of Carolina bays south of Cape Fear River. Whereas White Lake and Singletary Lake sit within a low-elevation valley along the river, the adjacent dunes and ridges with Carolina bays are located on higher land. 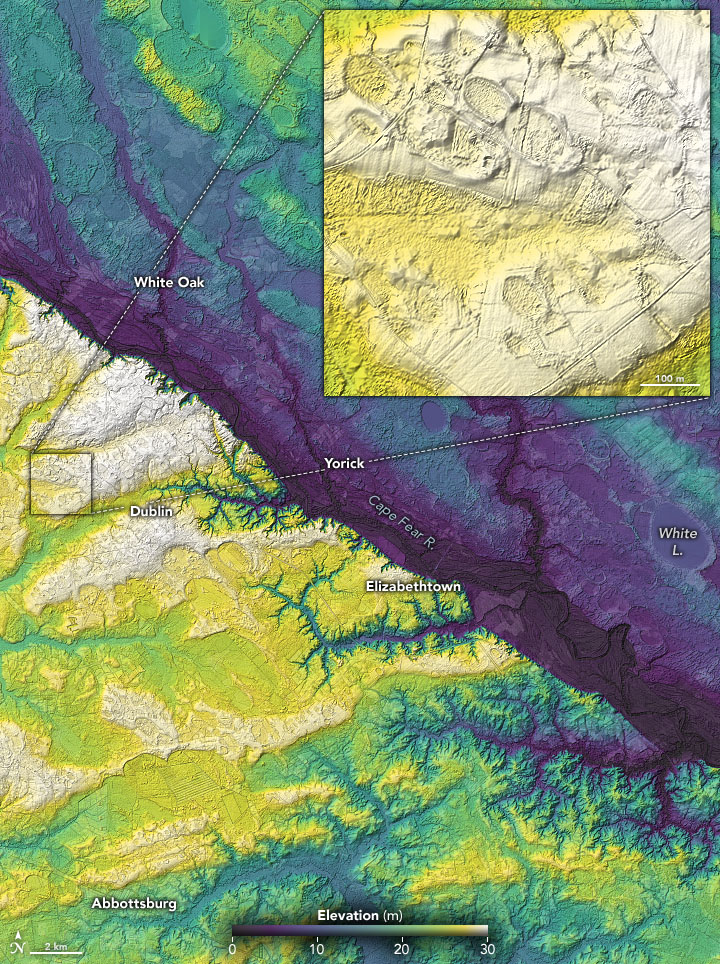 Many of the Carolina bays in this area have elliptical shapes oriented in a southeast-northwest direction. This orientation is a product of the prevailing winds when the lakes were forming, explained Christopher Swezey of the U.S. Geological Survey. “The dominant wind direction in this part of North Carolina was from the west, and that wind set up gyres in the lakes that eroded shorelines on the northwest and southeast margins of the lake.”

According to Swezey, most Carolina bays likely formed episodically during the last glacial maximum and the beginning stages of deglaciation, a period that spanned 40,000 to 11,000 years ago. While other geologists have speculated about the Carolina bays possibly being products of meteor impacts, Swezey has amassed evidence that they are relict thermokarst lakes.

An early study of the features estimated there are as many as 500,000 Carolina bays in the Atlantic coastal plain. “We now know that was a really conservative estimate,” said Swezey. “With the availability of modern LIDAR data, we are seeing many more of them than were previously recognized.”

The broad distribution of the Carolina bays suggests that permafrost extended for several hundred kilometers south of the ice sheet. “This is noteworthy because many geologists who studied glaciation in the past have suggested that frozen ground extended only as far south as northern Virginia during the last ice age,” said Swezey.