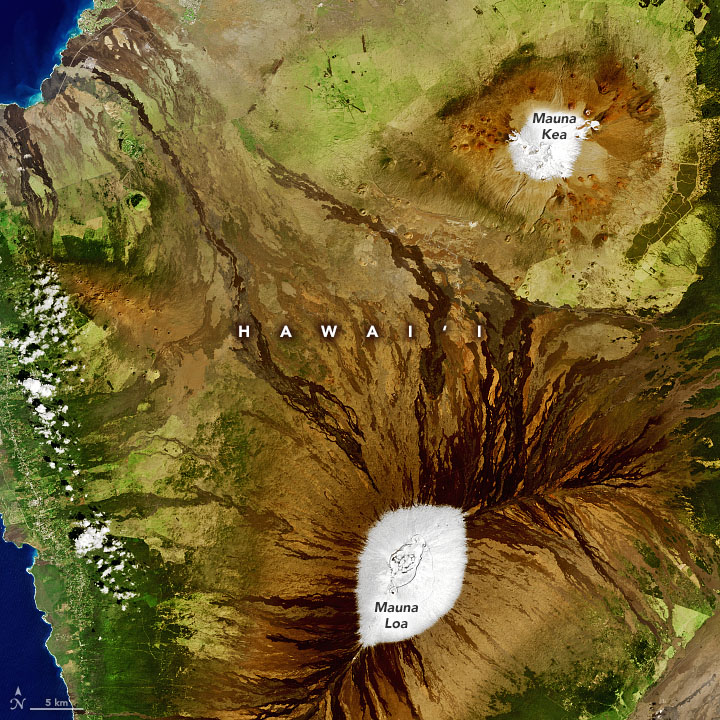 Snow is not as rare as you might think in the Hawaiian Islands. But it never stops being beautiful.

On February 6, 2021, the Operational Land Imager (OLI) on Landsat 8 acquired natural-color images of the “Big Island” of Hawai'i with abundant snow on its two tallest peaks. Nearly every year, Mauna Kea and Mauna Loa (elevation above 13,600 feet/4200 meters) receive at least a dusting that lasts a few days. Sometimes, like this year, it is more like a winter blanket of snow. 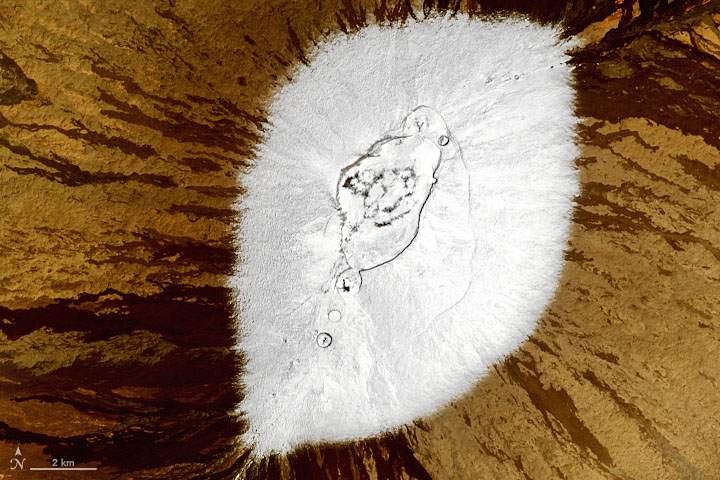 Starting with a moderate storm on January 18, 2021, snow has fallen three times on the highlands of Hawai'i in the past three weeks. The snow cover has persisted on Mauna Kea and Mauna Loa—the two tallest volcanoes in the island chain—since January 25. Some snow also briefly crowned Haleakalā volcano (elevation 10,000 feet/3000 meters) on the island of Maui.

The bar chart below shows the Normalized Difference Snow Index (NDSI) for Hawai'i as observed by NASA’s Terra satellite. NDSI incorporates a blend of visible light and shortwave infrared to assess the amount of snow within a given geographic area. The chart shows the combined NDSI for Mauna Loa (teal) and Mauna Kea (blue) for the first week of February in each year from 2001 to 2021. The combined weekly NDSI in 2021 for the two volcanoes is the highest since 2014 and second-highest in the record.

According to news and social media accounts, Hawaiians have found their way up the volcanic mountains with snowboards and boogie boards to sled through the fluffy white blanket. Others have filled their pickup truck beds to bring snow down to friends. Weather blogger Weatherboy shared photos collected from the scene.

Snowfall in Hawai'i is often associated with a weather phenomenon referred to as a Kona low. Winds that typically blow out of the northeast shift and blow from the southwest. The winds from the leeward or “Kona” side draw moisture from the tropical Pacific, turning it from rain to snow as the air rises up into the high elevations.

With the recent snowfall in Hawai'i, Florida is now the only state that has not yet seen snow this winter, according to The Weather Channel.