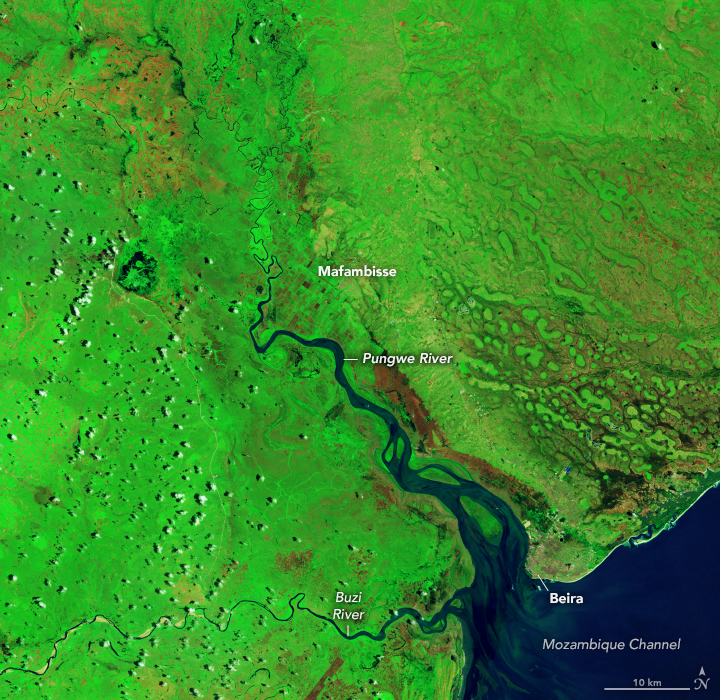 In late January 2021, Tropical Cyclone Eloise caused widespread damage and heavy flooding in central Mozambique. The storm displaced more than 16,000 people, damaged around 17,000 houses, and killed more than a dozen people across a few countries in southeast Africa.

These images show flooding on January 30, 2021, seven days after Eloise made landfall near the coastal city of Beira. The images from December 2019 are provided to compare the area under non-flooded conditions in the same season. The false-color images, acquired by the Operational Land Imager (OLI) on Landsat 8, use a combination of visible and infrared light (bands 7-5-3) to help differentiate flood water (dark blue), bare land (brown), and vegetation (bright green). 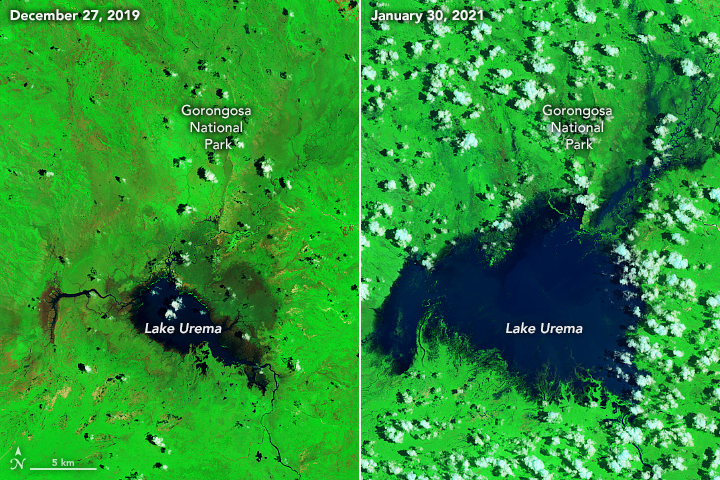 After crossing northern Madagascar and before making landfall on mainland Africa, Eloise slightly strengthened due to warm waters in the Mozambique Channel. Stations in Beira recorded 25 centimeters (10 inches) of rain in 24 hours. Several rivers burst their banks, and roads became impassable. Tens of thousands of hectares of farmland were submerged in brown water, which could affect harvest this April. The storm, which brought winds up to 160 kilometers (100 miles) per hour, also blew over trees, power lines, and signs.

Most of the areas hit by Eloise are still recovering from cyclones Idai and Kenneth in 2019, which claimed hundreds of lives. When Eloise hit, some villages were already flooded. In December 2020, Beira and other surrounding areas endured heavy rains and flooding from severe weather.

After making landfall in Mozambique, Eloise continued across southern Africa, though in a weakened state. The storm caused damage and flooding to South Africa, Eswatini, and Zimbabwe.