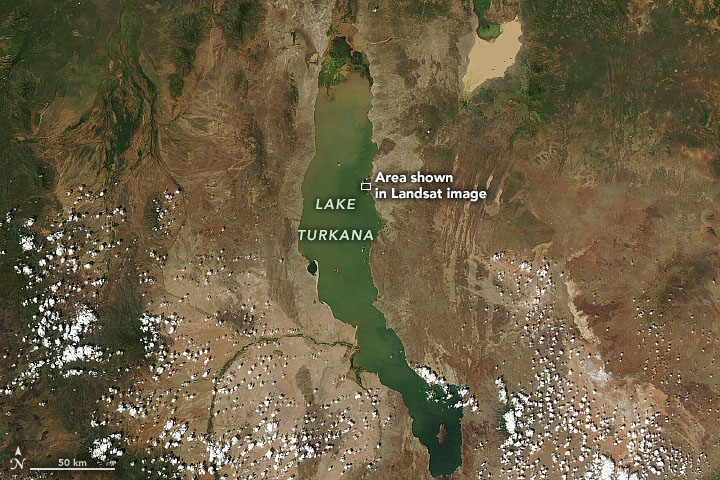 A Remote Lake with a Rich History

Surrounded by arid and barren land in east Africa, Lake Turkana is the largest permanent desert lake in the world. It is sometimes referred to as the Jade Sea due to its green color, a result of abundant algae. The lake is also unique for the largely intact fossils found along its shores, which have contributed more to the understanding of human ancestry than any other place in the world.

The image above shows Lake Turkana (formerly Lake Rudolf) on December 10, 2020, as observed by the Moderate Resolution Imaging Spectroradiometer (MODIS) on NASA’s Aqua satellite. The majority of the lake is located in the Great Rift Valley of Kenya, with its northern tip poking into Ethiopia. The lake stretches 250 kilometers (150 miles) from north to south and up to 44 kilometers (27 miles) wide. Like many desert lakes, Lake Turkana is a salty, closed basin.

Despite the unwelcoming environment for humans today, Lake Turkana was an ideal place for settlements about two million years ago, when conditions were wetter and greener. Nearby volcanoes helped preserve many human remains; researchers have found fossils embedded in hardened volcanic ash (known as tuff) and in various floodplains. Many intact fossils have been found on Lake Turkana’s eastern shore around Koobi Fora Ridge. The image below shows a closer view of Koobi Fora on January 28, 2021, acquired by the Operational Land Imager (OLI) on Landsat 8. 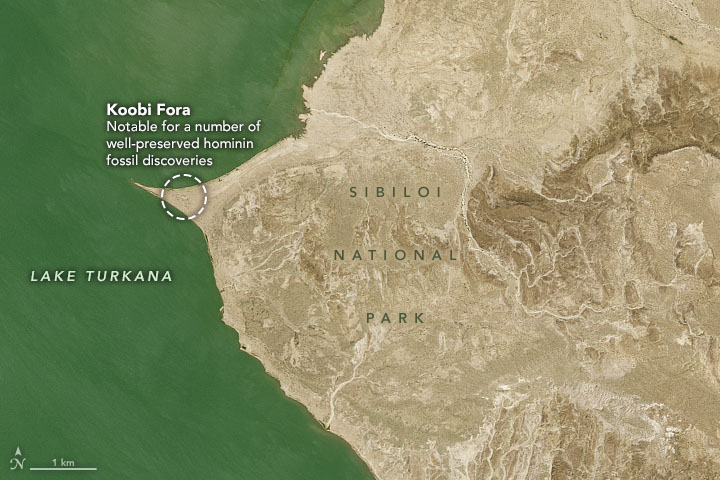 In 1984, paleontologists Richard and Meave Leakey discovered at Koobi Fora an almost-complete fossilized skeleton of a young boy dating to about 1.5 million years ago. Known as “Turkana boy,” it is the most complete early human skeleton ever found. In 1995, Meave and her team also uncovered a fossil of a primate that appeared to walk on two legs much earlier than previously thought—at least 4.2 million years ago. Fossils representing more than 200 early humans, as well as other mammals and mollusks, have been found at Koobi Fora.

Today, the area around Lake Turkana is sparsely populated by people due to its isolated location and inadequate fresh water. It is the most saline lake in East Africa, full of brackish water with high levels of fluoride that make it largely unsuitable for drinking. However, Lake Turkana and the three national parks nearby (Sibiloi, South Island, and Central Island national parks) serve as important stopovers for migrant water birds. They are also major breeding grounds for Nile crocodiles, hippopotamuses, and many venomous snakes, including carpet vipers and red spitting cobras.