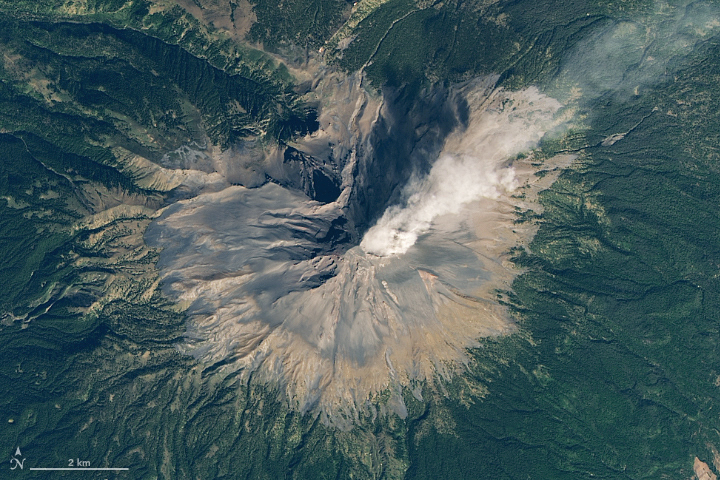 An Outburst from Popocatépetl

Popocatépetl volcano—the name is Aztec for “smoking mountain”—is one of Mexico’s most active volcanoes. The glacier-clad stratovolcano has been erupting since January 2005, with daily low-intensity emissions of gas, steam, and ash.

On January 2, 2021, the Operational Land Imager (OLI) on Landsat 8 captured this image of a plume rising from Popocatépetl (nicknamed El Popo).

On January 6, the Washington Volcanic Ash Advisory Center (VAAC) reported a volcanic ash plume that rose to around 6,400 meters (21,000 feet) above the volcano. Mexico’s National Center for Prevention of Disasters (CENAPRED), which continuously monitors Popo, warned people not to approach the volcano or its crater due to falling ash and rock fragments. Some ashfall was blown downwind to the city of Puebla, located about 45 kilometers (30 miles) away from the volcano.

At 5,426 meters (17,802 feet) above sea level, Popocatépetl is the second tallest volcano in Mexico (after Citlaltépetl). It is comprised of alternating layers of volcanic ash, lava, and rocks from earlier eruptions. The volcano is located around 70 kilometers (40 miles) southeast of Mexico City and more than 20 million people live close enough to be affected by a major eruption. However, most of the eruptions in the past 600 years have been relatively mild.