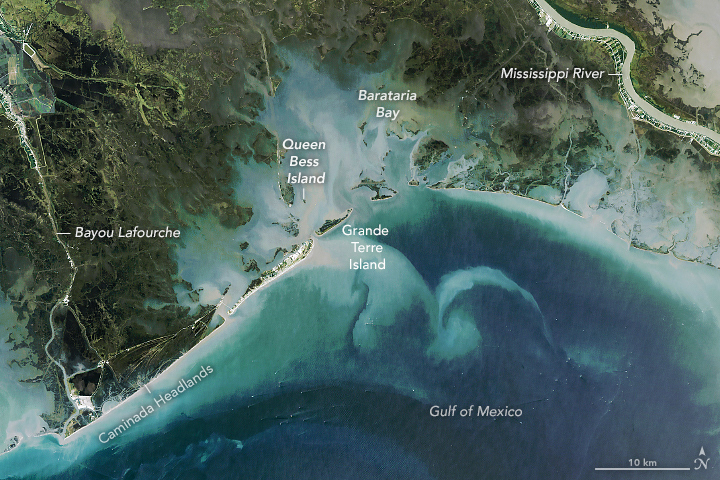 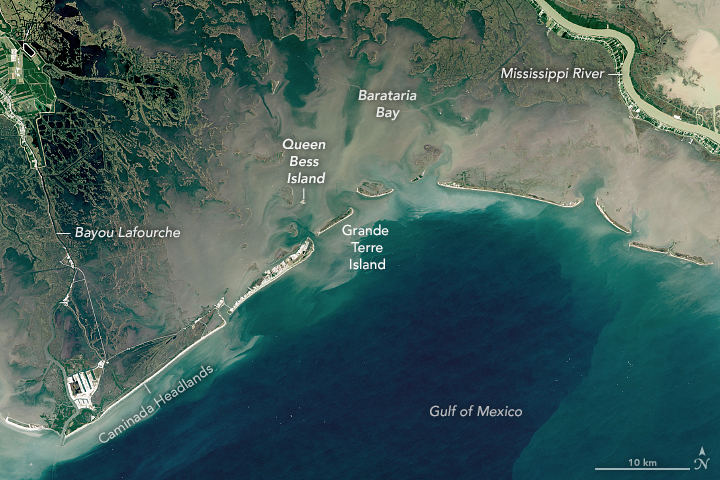 Sandwiched between the Mississippi River and Bayou Lafourche, the Barataria Bay in Louisiana is a latticework of shrinking marsh, swamp, and islands. Few other coastlines in the Mississippi River Delta—or anywhere in the United States—have changed as much in recent decades. According to one estimate, the bay lost 430 square miles (1120 square kilometers) of land—an area roughly the size of Los Angeles—between 1932 and 2016.

Multiple natural and human-caused processes are responsible. Among the most important is the natural settling and compaction of the geologically young mud that has been deposited in and around the bay. The Plaquemines Delta (the eastern side of Barataria Bay) is being built by the current outflow from the Mississippi River. The river only stopped delivering large amounts of sediment to the Lafourche Delta (the western side of the bay) about 400 years ago, meaning subsidence is still quite rapid in both areas.

Building a system of levees and canals to limit flooding has also played a large role in the land loss by preventing water from flowing into the bay and starving it of new sediment. Prior to the levees, the deposition of sediment used to add nearly 10,000 square kilometers (4,000 square miles) of land to the Mississippi Delta per year—an area larger than Vermont. Today, one of the few parts of the Louisiana coast still building new land is on the Atchafalaya River Delta. Barataria Bay, in contrast, receives minimal freshwater and sediment and builds no new land.

The twin challenges of global warming and sea level rise have contributed to the changes. Melting ice at the poles and thermal expansion of the ocean (by heating) has accelerated rates of land loss in Barataria Bay by roughly 20 to 30 percent, said Guandong Li, a Tulane University geologist who recently published a study on sediment dynamics in Barataria Bay.

This pair of images highlights the extent of the changes in Barataria Bay. The Operational Land Imager (OLI) on Landsat 8 captured the first image on October 2, 2020; the Thematic Mapper on Landsat 5 acquired the second image on August 31, 1985. Both were taken near high tide. The differences in water color are caused by variations in the lighting and the amount of suspended sediment in the water.

While showing the widespread loss of land, the images also point to human efforts to reinforce and rebuild beaches and marshes despite encroaching seas. Following the devastation caused by Hurricanes Katrina and Rita in 2005 and the Deepwater Horizon oil spill in 2010, Louisiana has pursued a comprehensive coastal protection and restoration plan that aims to reinforce all of the barrier islands around New Orleans in the hopes of restoring storm and oil-damaged marshes and minimizing damage from future hurricanes.

“The prevailing winds in coastal Louisiana are southeast, and Barataria Bay is sediment starved,” explained Chris Siverd, a coastal engineer and graduate of Louisiana State University who has studied the area. “If not continually restored, the barrier islands migrate north and west and shrink.”

One of the most visible projects in these images involves the restoration of Caminada Headlands, a mostly undeveloped barrier island in the southwestern part of the bay. The beach nourishment project there—the second largest in Louisiana history—widened and restored 13 miles (21 kilometers) of beach.

Queen Bess Island is another area where new land is visible. In 2019, coastal engineers used oil spill recovery funds to rebuild the small island, which is a key nesting ground for brown pelicans. Biologists expect the refurbished island to provide habitat for tens of thousands of pelican nesting pairs. A similar project, completed in 2012, rebuilt the ailing Pelican Island in the eastern part of the bay.

More recently, coastal engineers are starting to work on a new project to reinforce and expand Grand Terre, a fast-eroding barrier island that was once a base for the famed French pirate, slave trader, and Battle of New Orleans war hero Jean Lafitte.

There has been some positive news for Barataria Bay. A major effort to divert water and sediment from the main channel of the Mississippi River into the bay is nearing construction. Meanwhile, research indicates that the rate of land loss and subsidence has slowed in recent years. After losing as much as 10 square miles (25 square kilometers) per year in the early 1980s, the loss has averaged less than 2 square miles (5 square kilometers) in recent years. The reduction is likely due to a pause in the number of damaging hurricanes, a possible reduction in the natural rate of subsidence, and a decline in impacts from oil extraction, according to U.S. Geologic Survey researchers.

“But over the long term, significant drowning of Barataria Bay and the whole Mississippi River Delta is inevitable,” said Li. “Even if sediment loads were restored to levels from before all the levee and dam construction in the first part of the 20th Century, the numbers don’t add up. The delta would still be losing land because of the accelerating rate of sea level rise.”