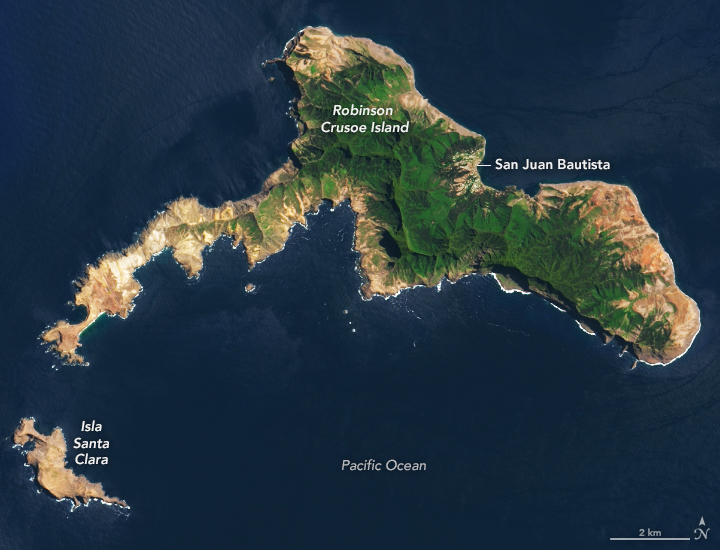 Popularized by the studies and writings of Charles Darwin, the Galápagos Islands gained fame for their abundance of endemic plants and animals—species found nowhere else on the planet. But another Pacific Ocean archipelago about 3800 kilometers (2400 miles) to the south, popularized by a novel about a shipwreck and castaway, rivals the Galápagos in its abundance of endemic plants.

Robinson Crusoe and Santa Clara islands, part of the Juan Fernández island group off of Chile, are visible in this image, acquired on November 7, 2018, by the Operational Land Imager (OLI) on Landsat 8. The second image below shows a detailed view of the vegetated area surrounding San Juan Bautista, the archipelago’s main town.

“The Robinson Crusoe and Santa Clara islands have a special beauty due to their rugged geography, their cliffs, their rock formations, and their unique native flora and fauna,” said Javiera Meza, who heads the conservation of biological diversity section of Chile’s National Forest Corporation (CONAF) . 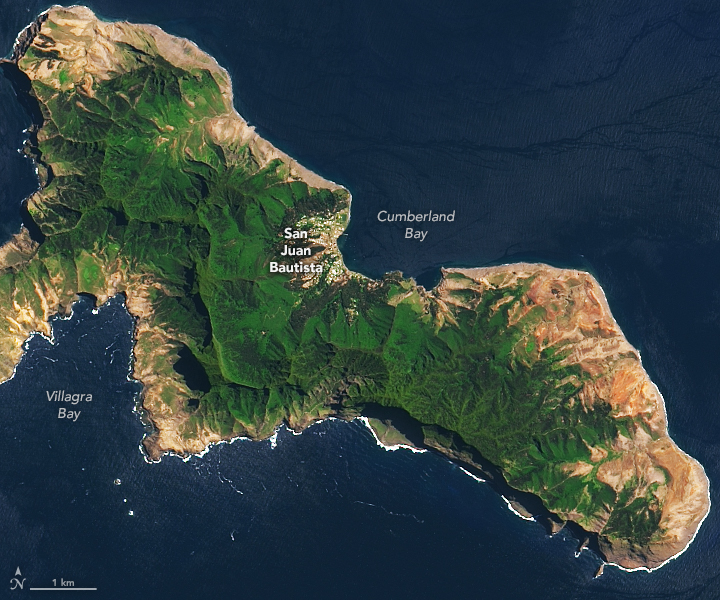 For an island spanning just 48 square kilometers (19 square miles), Robinson Crusoe Island has a remarkable amount of plant biodiversity. According to Meza, the island supports 149 recognized native plant taxa. Of those, 91 species (61 percent) are endemic. But this mini-hotspot of biodiversity is now threatened by the introduction of invasive plants; namely, maqui, mora, and murta.

Amid the blanket of green in these images, the darkest green at high elevations is mainly luma (Myrceugenia fernándeziana)—a woody, flowering evergreen tree endemic to the island. The dark green areas at lower elevations around San Juan Bautista are forest plantations with non-native trees: radiata pine, eucalyptus, and macrocarpa cypress. The intense, lighter green is maqui—an aggressive invasive shrub that grows in dense thickets.

Nearby, Isla Santa Clara appears entirely brown. This is in part because the island is covered in non-woody vegetation that dries up between November and March. Woody shrubs that do grow here tend to be small and scattered. On both islands, areas of light brown-yellow indicate erosion. This occurs where the landscape is naturally exposed, aided by previous fires that have left the soil unstable.

Humans have also introduced animals that have also affected the landscape. In particular, rabbits introduced to the islands in the 1930s competed for food and habitat, contributing to problems of erosion, loss of native plants, and the destruction of nesting sites for pink-footed shearwaters. In 2005, Isla Santa Clara became the first island in Chile to successfully eradicate these invasive rabbits.

The archipelago, including Alexander Selkirk (west of this image) and its islets, was designated as a national park in 1935 and a UNESCO biosphere reserve in 1977. Such designations were a long way off when sailor Alexander Selkirk was marooned on the islands in the early 1700s—an ordeal thought to have partially inspired Daniel Defoe’s novel Robinson Crusoe.