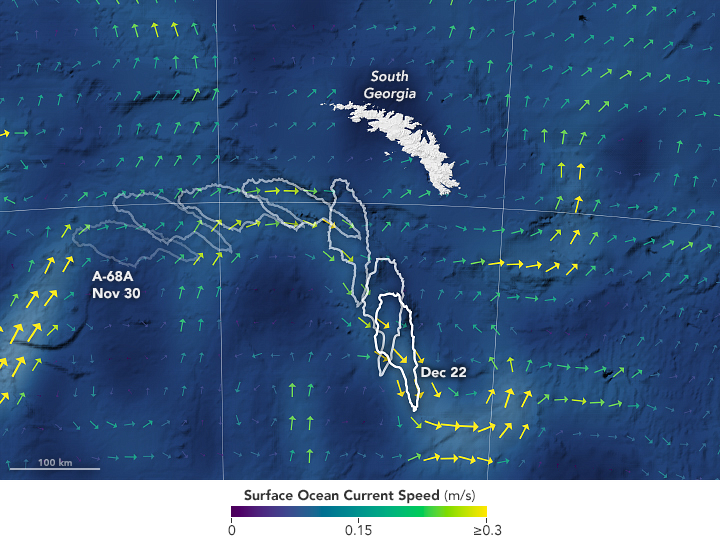 Iceberg Goes With the Flow

In early December 2020, the planet’s largest iceberg appeared headed straight for South Georgia Island in the southern Atlantic Ocean. Scientists and reporters wanted to know: Would iceberg A-68A continue its northward path and plow into the island’s underwater shelf? Or would it change course and stay far enough offshore to avoid becoming stuck, or “grounded”?

Josh Willis, an oceanographer at NASA’s Jet Propulsion Laboratory (JPL), started following A-68A recently, as it started to approach South Georgia Island. But he has been using satellites to study ocean currents for decades. “When I heard about how big the iceberg was and where it was—moving on the biggest current in the world—it was a no-brainer,” Willis said. “It’s got to be following ocean currents.”

As the map above shows, the trillion-ton iceberg neared the island’s shallow shelf in mid-December, then rotated clockwise and followed the current parallel to the shelf. The northern end of the berg protruded into shallow waters and eventually broke off, forming iceberg A-68D. Over the next several days, the main berg swerved and drifted southeast with the currents, away from South Georgia.

The current vectors shown on the map come from the Ocean Surface Current Analysis Real-time (OSCAR) model, which blends various measurements, such as wind and sea surface temperature. The most critical measurement in the model, however, is sea surface height. Ocean currents that last more than a few days will actually tilt the surface of the ocean. By measuring this tilt with a satellite radar altimeter, scientists can identify the location of currents and estimate how fast they are moving.

“Satellites that can tell us about ocean currents are really important for knowing how things spread out and move around the sea,” Willis said. “That’s useful for things like containing oil spills, aiding in search and rescue, and predicting the path of huge icebergs like A-68A.”

The altimetry technique currently works best with large-scale currents. And none are larger (or stronger) than the Antarctic Circumpolar Current. This current zips around the continent, squeezing through the passage between South America and the Antarctic Peninsula. That’s where it catches icebergs moving north along the Weddell Sea Gyre, and gives them a push to the east—in this case toward South Georgia Island.

Currents that are large enough to be visible from space—50 to 100 kilometers (30 to 60 miles) wide—are about the right size to move an iceberg the size of A-68A. As of December 18, the berg measured 135 kilometers long and 44 kilometers wide (73 by 24 nautical miles). And the portion visible above the sea surface is literally just the tip of the iceberg; as much as 90 percent of any iceberg lies below the sea surface. “When something is that big, it’s going to feel the currents that are the same size as it,” Willis said. 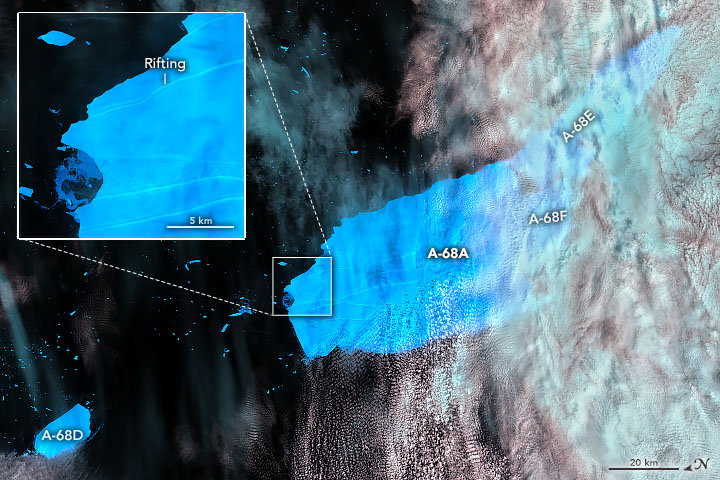 NASA’s Moderate Resolution Imaging Spectroradiometer (MODIS) instruments also captured daily images of the berg, some of which you can see in this time-lapse sequence.

Iceberg A-68A is still a behemoth iceberg, but it is changing fast. During the berg’s turn, a piece broke off and became iceberg A-68D. On December 22, the U.S. National Ice Center announced that two more large pieces broke away: icebergs A-68E and A-68F. The pieces are visible in the image above, which was acquired via special request by the Landsat Science Team on December 23, 2020, by the Operational Land Imager (OLI) on Landsat 8. The image is false-color (bands 6-5-4) to help differentiate clouds (light blue-white) and ice (dark blue).

Notice the bits of iceberg scattered across the ocean, which appear tiny compared with the named bergs. Some of these “small” pieces measure more than a kilometer long. Bergs like these are still at the mercy of currents, but winds and waves start to play a larger role in moving them around. Also notice the long rifts visible across the surface of A-68A, evidence of the stresses acting on the berg. Breakup of Antarctic icebergs is normal as they head north, where warmer water and air temperatures encourage melting.

The smaller, newly named icebergs will continue to follow the ocean currents. “But they might do more wiggling around than we can explain with the current generation of sea level satellites,” Willis said. “In a few years, though, the upcoming NASA/CNES Surface Water and Ocean Topography (SWOT) mission might give us enough resolution to be able to predict the path of even these smaller bergs.”