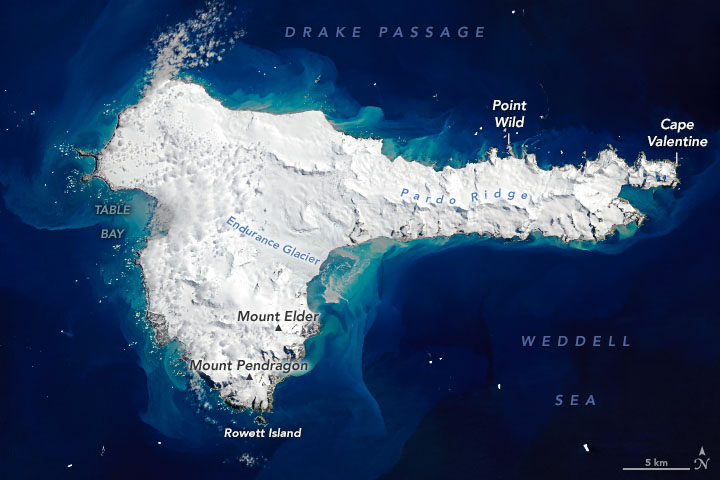 When explorer Ernest Shackleton and the crew of Endurance lost their ship to crushing pack ice in the Weddell Sea in 1915, their chances of survival seemed dim. The 28 men spent months drifting on ice floes and traversing the Southern Ocean in small lifeboats until they finally spotted land. The hunk of rock and ice was not the welcoming refuge they hoped for, but it was enough.

Shackleton and the crew of the Imperial Trans-Antarctic expedition landed on the mountainous, ice-covered island today known as Elephant Island. Some say Elephant Island got its name from the sighting of elephant seals along its shores; others suggest it comes from its appearance as an elephant head. But Shackleton’s captain claimed it was a nickname given by the crew: “Hell-of-an-Island.”

The image above shows a rare, cloud-free view of the remote island on December 13, 2020, as captured by the Operational Land Imager (OLI) on Landsat 8. The highest points, Mount Pendragon (970 meters or 3,200 feet) and Mount Elder (945 meters or 3,100 feet), are located on the southern side. In the center, Endurance glacier collects most of the ice flowing in the southeast direction.

Elephant Island is located about 250 kilometers (150 miles) northeast of the tip of the Antarctic Peninsula. Geologically, the island is part of the Scotia Plate, which was formed from continental fragments that once formed a land bridge between South America and Antarctica. The rocky island is comprised of green and blue phyllites, blueschists, and greenschists along the coast and in ridges.

Elephant Island has few plants or animals, save for some seals and gentoo and chinstrap penguins. Although it is in a prime location for observing whales, the island is not well visited and has remained relatively under-studied due to its remoteness and difficult terrain.

Shackleton and his crew initially landed on the eastern coast at Cape Valentine, but falling rocks and the proximity to the sea made it difficult to set up safe campsites. In fact, much of the island’s coastline consists of cliffs with steep slopes rising more than 100 meters (330 feet) in places. Crew member Frank Wild scouted more stable ground to the west, with lower elevation but also more glaciers. The team set up camp, naming the site Point Wild. 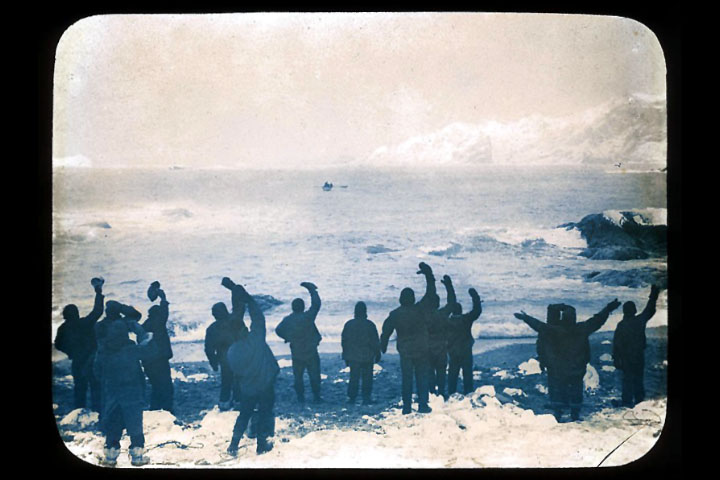 Shackleton realized their chances of getting rescued from Elephant Island by passing ships were low, so he and five crewmates took a lifeboat to look for help, leaving Wild in charge. The image above shows the crew waving goodbye on April 24, 1916.

The remaining crew built makeshift huts by resting their two remaining lifeboats upside down on rocks. To combat the perpetual darkness, they made lamps out of sardine tins, used surgical bandages for wicks, and burned seal blubber oil. Four and a half months later, Shackleton and crew returned with a ship and rescued all 22 men. King George V recognized Wild’s leadership as “instrumental in maintaining their courage and hope.”

Today, the island hosts one small research station occupied during the summer. At Point Wild, a monument was erected to honor the crew and their experience on the island.

NASA Earth Observatory image by Joshua Stevens, using Landsat data from the U.S. Geological Survey. Photograph by Frank Hurley (photographer on HMS Endurance) and in the public domain via the State Library of New South Wales. Story by Kasha Patel.