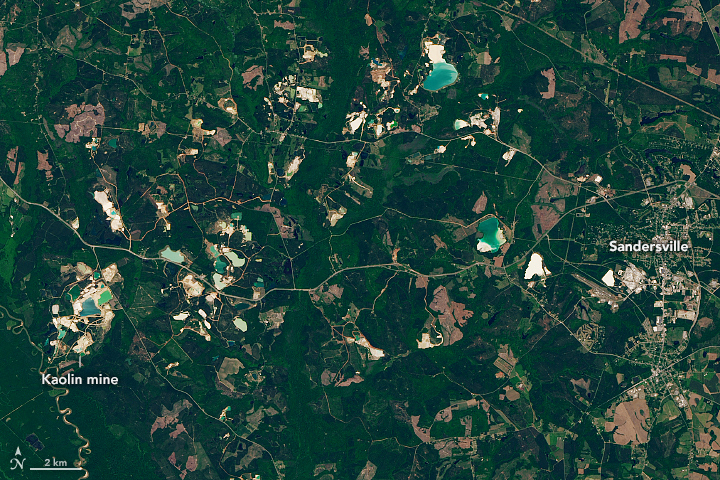 Kaolin Capital of the World

Roughly 70 million years ago, the land that is now Washington County, Georgia, was covered by a shallow tropical sea with a chain of young mountains nearby. As erosion wore away at the mountains over tens of millions of years, large deposits of mineral-rich silt accumulated in deltas, bays, and estuaries along the ancient coastline.

The process left behind deposits of a silica- and aluminum-rich mineral clay called kaolin in a narrow band along the coastline, which is marked today by the “fall line” that runs diagonally across Georgia and divides the hilly piedmont region from the flatter coastal plain. The soft white rock is widely used in the production of glossy papers, ceramics, bricks, cosmetics, paint, and many other products.

While kaolin deposits are present in several places in Georgia and other southeastern states, few areas have deposits that are as pure, white, and easily mined as those in Washington County. According to the U.S. Geological Survey, Georgia mines $1 billion worth of the clay every year, more than any other state.

Signs of the industry are apparent in this natural-color satellite image, where mining pits appear white. Rain has collected in many of the pits, forming ponds with a crystal blue color. Some of the forested areas around the active pits were mined in previous decades but have since been replanted with trees and other vegetation. The Operational Land Imager (OLI) on Landsat 8 captured this image on April 13, 2020.

Kaolin mining has a long history in the U.S. Southeast. Before Europeans arrived, the Cherokee people used the white clay in their homes and in pottery. As early as 1767, an English potter negotiated a deal with the Cherokee Nation to ship five tons of Georgia clay back to the Wedgewood, a pottery company in England, for use in porcelain. Still, it was not until the 1950s that companies set up large-scale mines and processing facilities similar to those in this image.

Kaolin has had a particularly strong impact on the town of Sandersville, which brands itself as the “kaolin capital of the world.” Each October, the town hosts a festival that includes a parade of heavy mining machinery, kaolin mine tours, and a beauty pageant that crowns Miss Kaolin. There is even a long-running tradition of locals eating kaolin, particularly women during pregnancy.