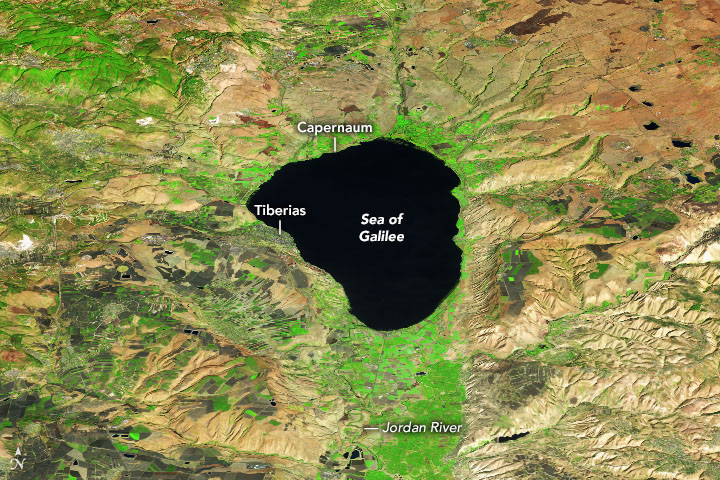 The Sea of Galilee in northern Israel—one of the lowest-lying bodies of water in the world—has long been a source of religious inspiration and intrigue. It was along the shores of the shallow freshwater lake where the Christian gospels say Jesus performed some of his ministry and certain miracles. Jewish settlers established the first kibbutz nearby. And it appears in certain Islamic prophesies.

The Operational Land Imager (OLI) on Landsat 8 captured this false-color image (bands 6-5-4) of the lake and its surrounding landscape on October 27, 2020. The image was overlaid on a digital elevation model from the Shuttle Radar Topography Mission (SRTM) to give a sense of the topography. Note: the two views shown here are different perspectives on the same image.

Some underground springs drain into the lake, but most of its water arrives through the Jordan River, which flows from Lebanon in the north to Israel and Jordan in the south. The Sea of Galilee (sometimes called Lake Tiberias or Lake Kinneret) lies within the Jordan Rift Valley, a narrow depression that began forming tens of millions of years ago as the Arabian plate tore away from Africa. Many of the marshy floodplains around the lake and to the south have been converted into farmland, which appears bright green. 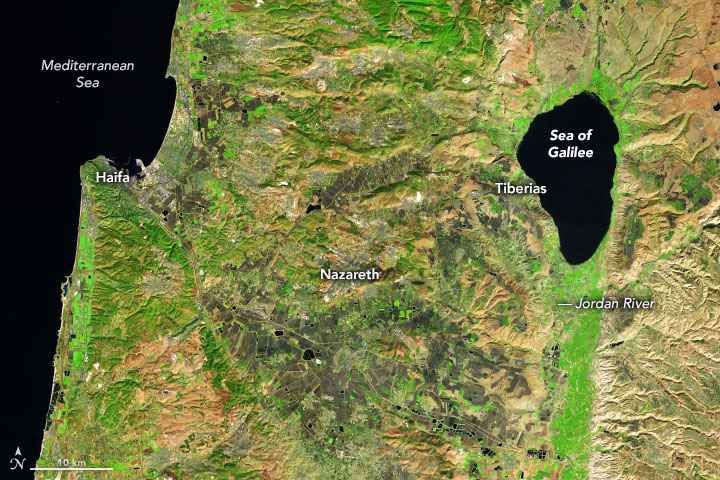 The Sea of Galilee has long been a popular destination for pilgrims. Yet the condition of the lake has grown increasingly tenuous in recent decades. Water levels dropped significantly during the past two decades, nearly hitting an all-time low in 2018. Less water causes the lake to become saltier, making it less viable as a source of drinking water. Such changes also threaten fish populations and encourage problematic algae blooms.

Understanding those declining water levels and finding ways to keep them stable is a topic of much research in the region. Explanations for the decline include a lack of rain, increased water usage upstream in Lebanon, rising temperatures (which increase evaporation), and the expansion of farmland and irrigation around the lake. One research team recently investigated all of these possibilities by analyzing meteorological data, information from stream gauges, and Landsat satellite observations to estimate farmland extent. They found the expansion of agriculture and diversions for water use in Israel over the past two decades to be the best explanation for the decline.

Recent years have been better, as two wet winters have helped the lake rebound considerably. The water level stood at 209.9 meters (688.6 feet) on December 16, 2020, high enough that hydrologists consider it nearly full. The last time it reached such heights was nearly two decades ago. Israel’s water authority has considered opening a dam at the southern end of the lake to prevent flooding, according to The Jerusalem Post.