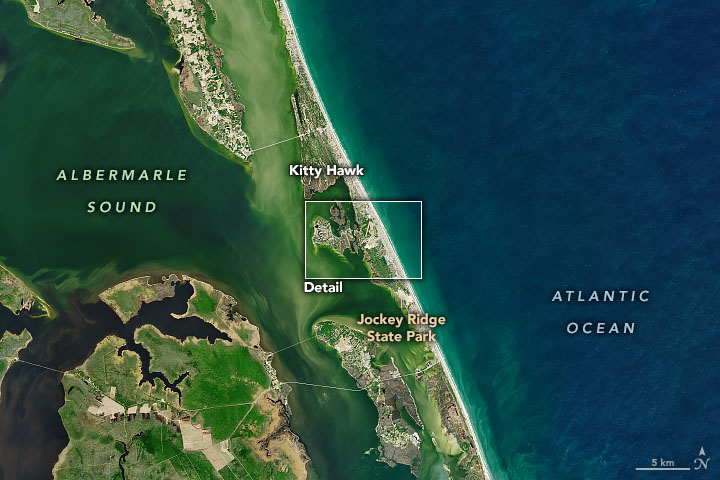 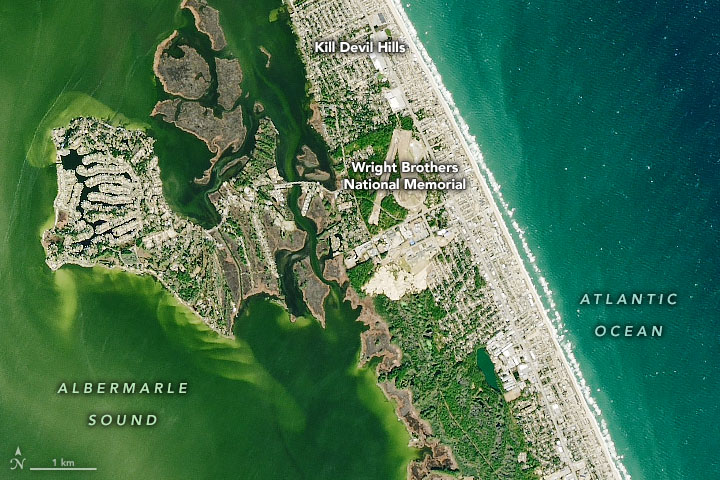 Sand, wind, and isolation: These factors led engineer-inventors Wilbur and Orville Wright to travel from Dayton, Ohio, to North Carolin’s barrier islands to conduct their flying experiments from 1900-1903. Today there is still plenty of wind in the Kitty Hawk area, but the giant sand dunes and isolation of the early 1900s are harder to come by.

On December 21, 2017, the Operational Land Imager (OLI) on Landsat 8 acquired this image of Bodie Island. This is the northern section of the state’s barrier islands that separate the Atlantic Ocean from Albermarle Sound.

The town of Kitty Hawk is visible in the wide view (top). About 4 miles (6 kilometers) to the south, the Wright brothers conducted their flight experiments starting in 1900 and famously made the first sustained flight of a powered aircraft on December 17, 1903. The Wright Brothers National Memorial marks the historic site (detailed image) in what is now known as Kill Devil Hills.

The memorial stands atop Big Kill Devil Hill—the tallest dune in the area and the one from which the brothers launched most of their glider experiments. The dune stood about 100 feet tall, giving them enough altitude to practice the mechanics of flight with gliders prior to adding engines and propellors. The sand provided a relatively soft landing for more than 1,000 glider launches from Big Kill Devil Hill and smaller surrounding dunes.

The smaller dunes, which stood about 40 feet (12 meters) tall, were destroyed by a hurricane in 1912. Big Kill Devil Hill survived and remains visible in the detailed image. But winds acted on this dune, too, causing it to migrate 450 feet to the southwest within 25 years of the famous first flight.

Starting in 1928, grasses and shrubs were planted to stabilize the dune and make it sturdy enough to support a monument. About a decade later, artificial dunes were constructed to act as barriers against high winds, salt spray, and the surge of water and sediment during storms. Today you would have to go 5 miles (7 kilometers) south to Jockey’s Ridge State Park to find the sort of sparsely vegetated, wind-exposed expanses of sand that attracted the Wright brothers.

It is not just the vegetation that has changed. When the pioneering flyers set up camp in the dunes in 1900, Kitty Hawk consisted of a few houses, a U.S. Lifesaving Service station, and a U.S. Weather Bureau station. They traveled from Ohio to the islands via train and then boat. Today, the year-round population of Kitty Hawk exceeds 3,500 people and Kill Devil Hills has more than 7,000. Access is straightforward, with bridges north and south of the towns connecting to the mainland.

You can still find some isolated spots along Bodie Island, especially in December when fewer tourists visit the beaches. Coastal preserves and nature reserves dot the Outer Banks. A handful of islands are only accessible by boat; a few can be reached by airplane.