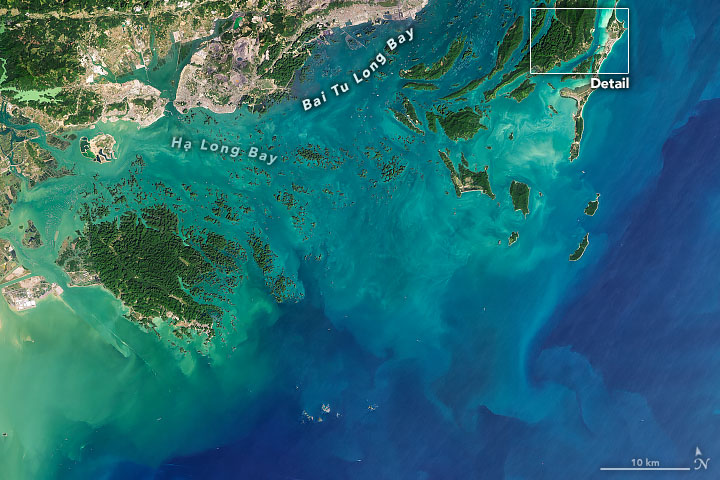 In traditional Vietnamese culture, the dragon is a powerful and sacred mythical creature. According to legend, Vietnam was constantly fighting off intruders from the north thousands of years ago. The Jade Emperor who ruled heaven (Ngọc Hoàng Thượng đế) sent the Mother Dragon and her children to help defeat the invaders. When the dragons descended, they immediately thwarted an attack in the Eastern Sea, incinerating the enemies with fire and emeralds from their mouths.

After the battle, the dragons decided to stay in the mortal world, taking human form to help with farming and expanding the country. Legend says the Mother Dragon landed in what is known today as Hạ Long Bay; her children set down in Bai Tu Long Bay. Some say the emeralds used during the attack were scattered around the waters and formed the islands seen today.

The image at the top of this page shows the two bays along the northeast coast of Vietnam, about 170 kilometers (100 miles) east of Hanoi. The image was acquired on November 12, 2020, by the Operational Land Imager (OLI) on Landsat 8.

Hạ Long Bay—roughly meaning “descending dragon”—is known for some of the most breathtaking scenery in Vietnam. This World Heritage Site includes about 1,600 islands and islets, most topped with rainforests. Most of the islands are very steep and unhabitable, so tourists explore their edges via boat.

Hạ Long Bay includes Bai Tu Long Bay National Park to the northeast. The park contains 40 islands and almost 2,000 species of plants and animals—of which 70 are listed as endangered species. The park spans both land and water, including broad-leaved rainforests, coral reefs, and shallow water areas. 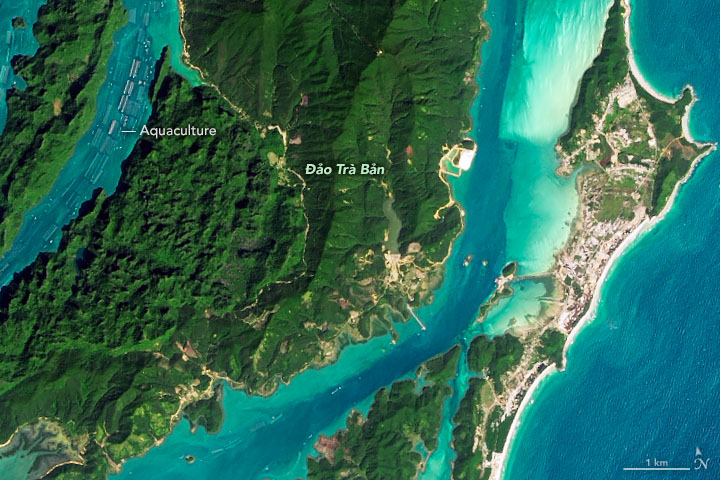 The image above shows one of the larger islands of Bai Tu Long Bay National Park. Close to shore, many fishermen practice aquaculture, using cages to raise grouper, cobia, tiger fish, king butler, and other fish.

Much of the area around the bays is comprised of limestone, with drowned karst landforms scattered around the waters. In fact, the area contains some the most impressive range of karst formations in the world, allowing researchers to study the geoclimatic history in the area. The karst landforms appear as pillars with different erosional features such as conical peaks, arches, and caves; some are 1,200 meters (4,000 feet) thick. The limestone began forming around 340 million years ago when carbonate sediments from land entered the ocean. Over millions of years, the limestone eventually hardened and thickened into the famous karsts seen today.