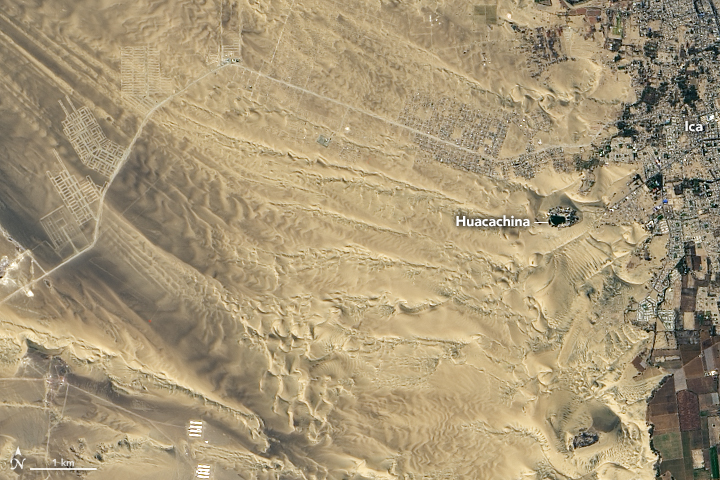 A Lagoon in the Desert

If you accidentally stumbled upon the town of Huacachina, you might think it is a mirage. Huacachina is centered around a lagoon lined with lush vegetation—all located in the driest desert in the world. Snuggled between the biggest sand dunes in South America, it is the only natural oasis on the continent.

On August 15, 2020, the Operational Land Imager (OLI) on Landsat 8 captured this image of Huacachina and the adjacent sand dunes. Huacachina is located in southwestern Peru on the edge of the Atacama desert. The town is located about 5 kilometers (3 miles) from the city of Ica.

Roughly translating to “weeping woman” in Quechua, Huacachina has several mythological origin stories. One legends says a beautiful Incan princess named Huacachina was mourning the loss of her lover, and her tears created the lagoon. One day, a warrior saw her and startled the princess, who ran into the water to hide for hours. When she tried to leave, she had transformed into a mermaid. Another version says the princess was holding a mirror and admiring herself when the warrior saw her. When she ran away startled, the mirror fell and shattered. The glass became the tiny pool in the desert and consumed the princess, turning her into a mermaid. Many legends say Huacachina still lives in the pool and comes out at night to tempt swimmers. 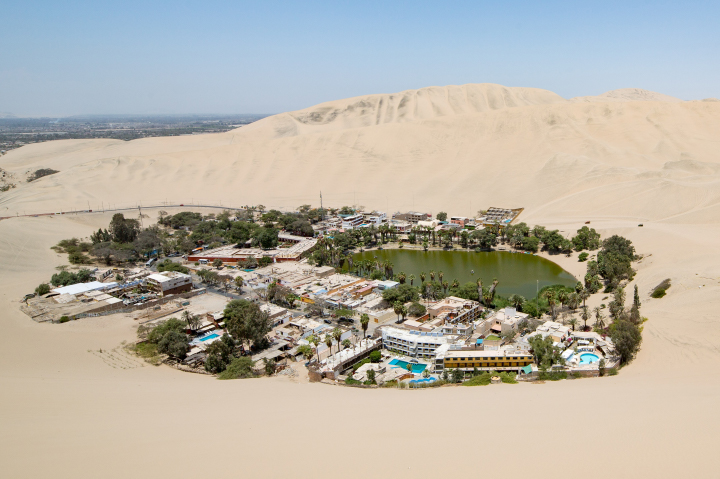 The oasis is actually formed by water from underground aquifers that seeps through the sand and helps promote the growth of palm trees, eucalyptus, and carob trees around the pool. The lagoon, which only covers about 2 acres, is encircled by businesses, hotels, and restaurants on its rim. The oasis town has a population of around 100 year-round residents. In recent years, water levels in the lagoon have decreased due to the drilling of nearby wells and increased evaporation during the hot summers. Consequently, the town has been feeding water into the lagoon from outside sources.

Located about a five-hour bus ride from Lima, Huacachina has served as a popular tourist destination for more than 70 years. The town entertained many of Peru’s financial elite in the 1940s, and today entertains tens of thousands of tourists per year. Once called the “oasis of America,” Huacachina was featured on the 50 Nueva Sol currency note until 2006.

The soaring sand dunes beyond the oasis rise several hundred feet in elevation—as tall as small mountains. They provide excellent sandboarding adventures: Adrenaline junkies can slide down the dunes like tubers or snowboarders. Visitors can also ride dune buggies across the dunes or hike, although the sand makes hiking strenuous.