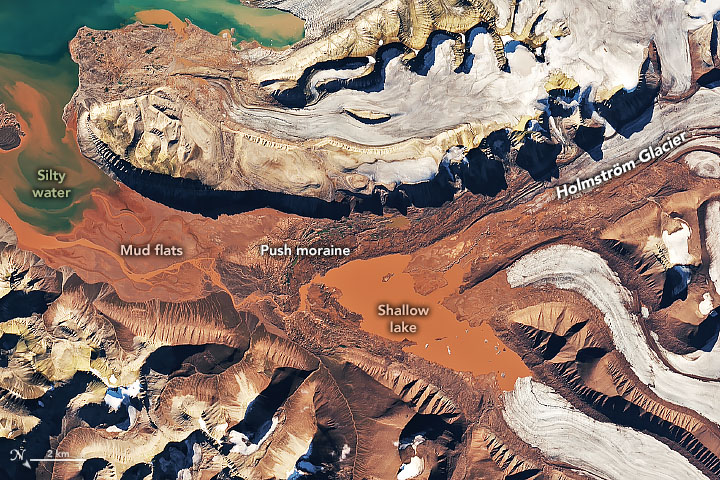 A Swirl of Old Supercontinent Silt

Svalbard, an archipelago between mainland Norway and the North Pole, is known as something of a mecca for geologists. It is one of the few places in the world that has easily accessible rocks from nearly every geological time period. There is little soil or vegetation to cover up the remarkable geologic diversity. And despite the Arctic location, ocean currents moderate the weather enough to keep much of the land clear of snow in the summer.

Among the more striking geologic attractions, at least when viewed from above, are glaciers on the archipelago’s northwestern island of Spitsbergen. The ice there seems to “bleed” meltwater that is an intense shade of red. The Operational Land Imager (OLI) on Landsat 8 acquired this natural-color image of red water pooling in a shallow meltwater lake near the terminus of Holmström glacier. The image was captured on August 23, 2020, shortly after an unusual heatwave brought record-breaking temperatures to Svalbard. The image below shows a wider view. Note that the image has been rotated to combat relief inversion, an optical illusion that can make valleys look like mountains. 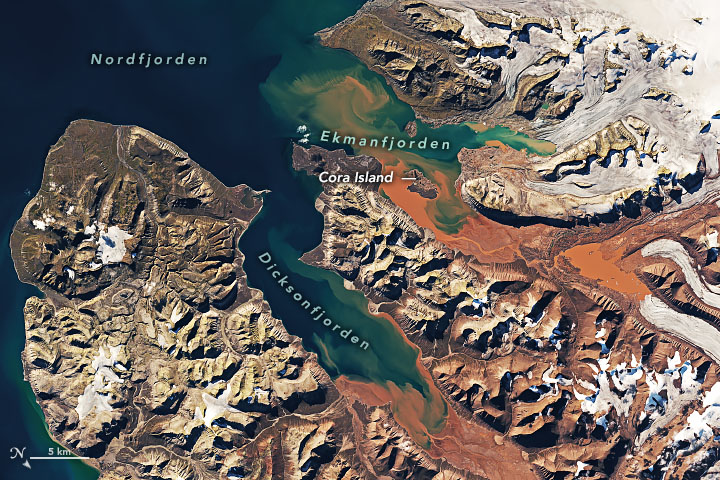 The red color is due to an abundance of sediment that has sloughed off from a particularly iron-rich layer of rock that formed roughly 400 million years ago (during the Devonian Period). Sometimes called the Old Red Sandstone, the rock layer formed on land when sand and other sediments were trapped in a basin enclosed by series of mountain ranges. The mountain ranges emerged when several of the world’s land masses were smashed together in a supercontinent called Laurussia, sometimes called the Old Red Continent.

“The red Devonian rock is fairly soft and erodes easily,” explained University of Edinburgh geologist Geoffrey Boulton. “Glacial grinding produces a great deal of silt. These very small—and in this case red—particles are easily suspended in flowing meltwater and take a long time to settle in still water.”

The silty meltwater pooled first in a shallow lake that had formed behind Holmström’s push moraine—a dam-like pile of sediment bulldozed by the front of the glacier when it surged about a century ago. Since then, a drainage stream has carved a narrow channel through the folded sediments of the moraine. The stream eventually widens and meanders some as it moves through mud flats as it approaches the sea. “When the silty water reaches seawater in Ekmanfjorden, it stays at the surface because the freshwater has a lower density than saltwater,” explained Boulton.