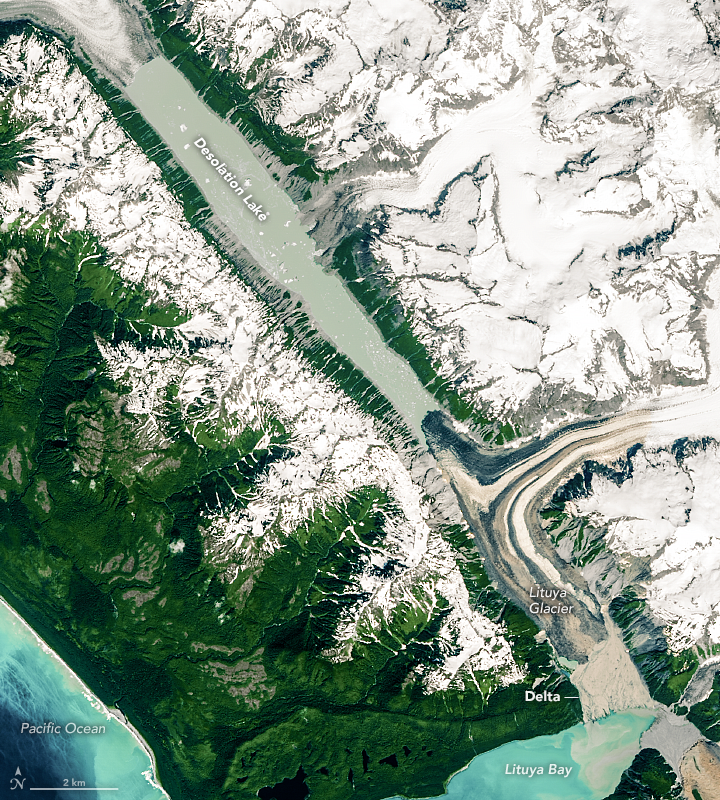 Lituya Bay is best known among geologists for a landslide in 1958 that slammed into its waters and triggered one of the largest tsunami waves known to science. But that is not the only dramatic geologic phenomenon lurking in this glacier-sculpted fjord in southeastern Alaska.

In August 2020, a commercial fisherman noticed a surprisingly strong current of muddy water, trees, and chunks of ice rushing against the tide near the head of the bay. He alerted a geologist at the National Park Service, and a small team of researchers has since pieced together what likely caused the surge of floodwater. Their investigative tool of choice? Satellites.

“We can see clearly using Sentinel 2, Landsat 8, and Planet Labs imagery that a huge lake that had been dammed by Lituya Glacier drained abruptly in mid-August,” explained Bretwood “Hig” Higman, a geologist with Ground Truth Alaska. Events like these are known as glacial lake outburst floods (GLOFs), or sometimes jökulhlaups.

The pair of natural-color Landsat 8 and Sentinel 2 images above highlights changes caused by the flood. Notice how much lower Desolation Lake stood on September 6, 2020, than on July 1, 2020. Also, the stream channels that run through the delta and into Lituya Bay shifted significantly, with a few small lakes completely filled with gravel. The aerial photograph below, taken by a National Park Service ranger on September 17, 2020, shows the delta after it had been altered by the flood.

“It appears that this massive outburst flood traveled underneath the Lituya Glacier, emerging from under its south end onto the gravel delta that now separates the glacier from Lituya Bay,” said National Park Service geologist Michael Loso in a blog post for Glacier Bay National Park. “The lake level dropped at least 60 meters (200 feet), implying a total flood volume of about half a cubic kilometer of water. For comparison, that is nearly an hour’s worth of average flow from the world’s most voluminous river: the Amazon.”

Satellite imagery of the same area collected makes clear that this summer’s glacial lake outburst flood was not the only one here, though it is likely one of the largest. University of Northern British Columbia geomorphologist Marten Geertsema and colleagues have found evidence in satellite imagery of at least twelve similar events since 2004, including one in 2009 that was described in detail on a travel blog. Signs of past floods include changes in the water extent and the appearance of stranded icebergs, Geertsema explained.

“The amount of sediment pushed out from under the glacier by these events is really impressive, perhaps over 10 million cubic meters per event,” said Higman. “That has been enough to build a broad delta over parts of the bay that were 100 meters (300 feet) deep only a few decades ago.”

The new delta has implications for future tsunamis. If the 1958 landslide were to happen again at the same location, it would fall on land rather than water now, reducing the chances of generating such a large wave. “However, the delta may not be very stable because of how quickly it has been built,” cautioned Higman, “and that means an earthquake or landslide could still cause it to fail and possibly trigger a wave.”