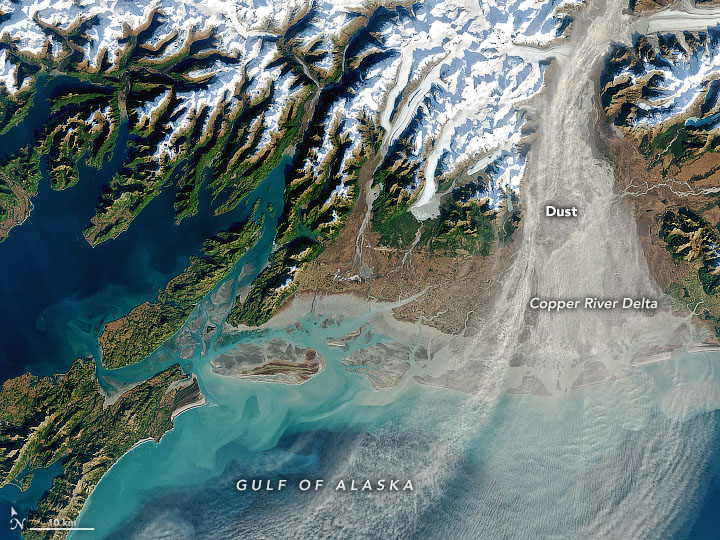 Dust storms are relatively common in places like the Sahara Desert. But they can happen at high latitudes, too, in places that are icy and dry. This image shows one of a handful of dust clouds that streamed over the Gulf of Alaska in autumn 2020.

The dust pictured here originated upstream in the Copper River Valley, where glaciers have crushed rocks into a very fine silt, or “glacial flour.” River water carries the silt south and deposits it along the delta and shore. Because the silt particles are so fine, they are easily lofted into the air by a stiff breeze.

Winds were especially strong on October 22, 2020, when the Operational Land Imager (OLI) on Landsat 8 acquired this natural-color image. A pressure gradient caused low-level air to accelerate out of the valley—a phenomenon known as a “gap wind”—and stir up a substantial amount of the silt.

Strong seasonal winds are just one reason why dust clouds occur across southern Alaska between late September and mid-November, explained Santiago Gassó, an atmospheric scientist at NASA’s Goddard Space Flight Center. This is also the time of year when river levels start to decline because glacial melt has tapered off; this leaves more silt exposed to the wind. The amount of exposed silt also depends on the amount of snow cover, which was mostly absent along the Copper River’s shoreline and delta in late October.

Dust clouds from Alaska produce some spectacular satellite images, but they could also play an important role in the region’s ecosystem. The dust contains iron, a micronutrient that phytoplankton can use once the dust settles and dissolves in the Gulf of Alaska. “Although the magnitude of Alaskan dust events is not as massive as those seen in the North Atlantic, they may be more effective in terms of fertilization potential per unit of mass of dust because glacial silt is more soluble,” Gassó said.

Exactly how much dust in southern Alaska becomes airborne is still uncertain, as is the relative importance of the multiple sources of micronutrient iron in this part of the North Pacific Ocean. But scientists are working to find out.

“Until a few years ago, we knew about dust activity in this part of the world in very anecdotal way,” Gassó said. “But with the advent of better online platforms to search for images, as well as the increase of number of satellites in operation, the surveillance of this area—and other high latitude dust sources such as Greenland—is easier to carry out. This has contributed to the discovery that high latitude dust activity is fairly common, and it dispels the belief that dust storms are a purely hot-environment phenomenon.”