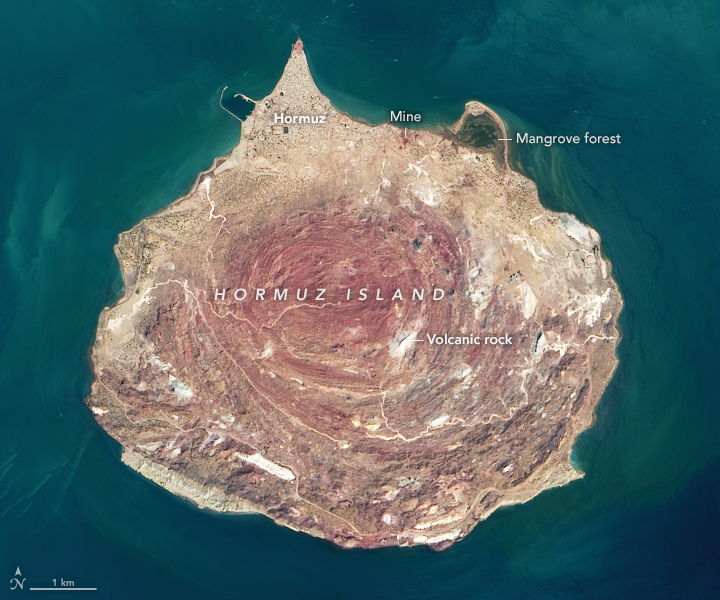 With its colorful soils, salt caves and mountains, and ocher-stained streams and beaches, Iran’s Hormuz island is rich with memorable geology.

The island is a salt dome—a teardrop-shaped mound of rock salt, gypsum, anhydrite, and other evaporites that has risen upward through overlying layers of rock. Rock salt, or halite, is weak and buoyant, so it loses its brittleness and flows more like a liquid when under high pressure.

The rising mass is not purely made of salt. Embedded within it are layers of clay, carbonates, shale, and iron-rich volcanic rocks, some of which have taken on vivid shades of red, yellow, and orange as they moved upward and interacted with water and minerals from other rock layers.

The concentric ring structure of the uplifted salt dome is visible in this natural-color image acquired by the Operational Land Imager (OLI) on Landsat 8. Uplifted halite is widespread near the central and southern two-thirds of the island, which appear reddish amid outcrops of weathered, volcanic rocks that appear gray. The tan northern third of the island is covered by a layer of sand and other sediment that was deposited by other processes.

The ocher soils on the island have proven appealing to cooks, artists, and miners alike. Locals reportedly use the red soil to season a certain type of bread. Groups of artists have used it to create expansive sand carpets. Sand from a mine in the northern part of the island has also been used in paints, cosmetics, ceramic tiles, and for the exteriors of buildings.

One nongeological feature of the island stands out in the image: At the northern end, a small inlet hosts a concentrated patch of mangroves that appear green. Known locally as a hara forest, the area serves as habitat for numerous types of fish, mollusks, crustaceans, and migratory birds.